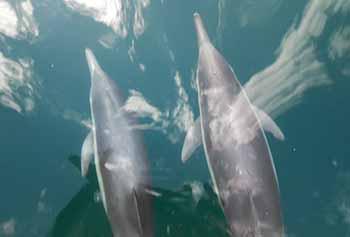 After experiencing poor dive conditions for most of this year, we FINALLY had a weekend that looked promising.  On Sunday, July 14th, we headed out from our slip in San Pedro under skies that were patched with clouds, and seas that were pretty flat..

The crew this day consisted of Eric Humpreys, Al Laubenstein, Andy The, and myself as the divers.  Jim Lieber handled the boat as 1st Mate, with Jeff Connor and Lisa Davis providing the much-needed deck support.

In planning for this outing, I reviewed video footage I had taken on a helicopter scouting flight which was piloted by Chris Aultman. 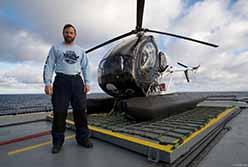 For several years we went up at the beginning of the lobster killing season (October) and filmed areas with high densities of lobster trap markers.  Chris would get us low enough over the water that I could see the markers on the video.  I would review the images later and make note of where there were high numbers of traps.

Ten to fifteen percent of these legally set traps are lost every year.  The traps typically become separated from the markers because boat propellers cut the line, strong winter storms pull the markers from the line, or someone actually cuts the line.

So after going back and looking at those invaluable videos, I thought we might find some items that needed removing at the west end of Palos Verdes.  On our way to the site we were treated to a feeding frenzy of pelicans, cormorants, terns and seagulls who were dive bombing the same group of sardines that a large pod of dolphins were chasing to the surface.  We had several dozen dolphins come over and "bow ride" quite a while, serving as an honor guard as we motored toward our planetary duty!

As we were passing Point Vicente Marine Protected Area (MPA), I noticed a small recreational boat with seven poles in the water.  This is a NO TAKE zone, and I informed them where the boundaries of the park were.  The pulled their lines out of the water and left the area. 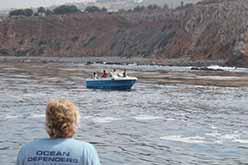 We recently purchased three Diver Propulsion Vessel's (DPVs) thanks to a generous donation by television celebrity and animal champion Mr. Bob Barker.  This was only our second time using them and I remain astounded by how much more area we can cover in a single dive than we could just using our fins.  Up to 5 times more!  Plus we can stay down longer because we aren't expending so much energy (and oxygen) while kicking against ocean currents. 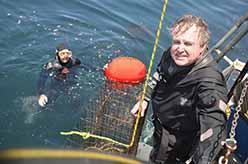 After an hour and a half transit we arrived at the site that I wanted to check out. We quickly got into our dive gear and broke up into two teams.  Within 30 minutes, Andy and Eric had located three abandoned traps and sent them to the surface.  One of them had a live lobster in it that was set free!  Of these three traps, two of them had bungee cords securing the trap doors.  This is illegal, but is also very common.  I'd have to say of all the traps we've removed over the years, 80% of them have these bungee cords on them.  It is such a huge issue that the Department of Fish & Wildlife (DF&W) wants us to document how many we find like this, and we are. 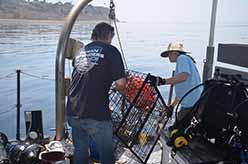 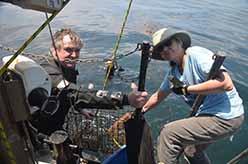 There is a latch on these lobster traps that is designed to deteriorate after six months.  Once it has done that, the door is no longer clamped shut, and any animals that are in it can (usually) escape.  With the bungee cords on them, the door remains closed forever and any animals stuck in them are doomed to isolation and death.

It sure was nice to be productive again.  Nature saw to it that we had good dive conditions and underwater visibility.  All told, we removed three lobster traps and 300 feet of polypropylene line.

We had a great time out there, and because of our dedicated volunteers and donors, we will see many more productive days like this in our near future. 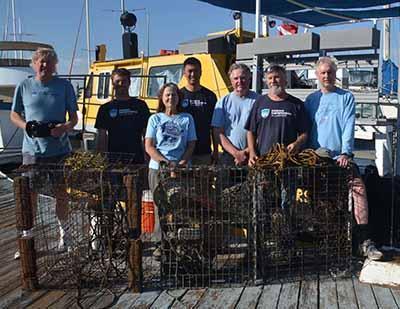 Thank you for helping us protect ocean life!

We would be grateful if you would make a donation to help keep our boat and crew at sea!