Not to Ocean Defenders Alliance 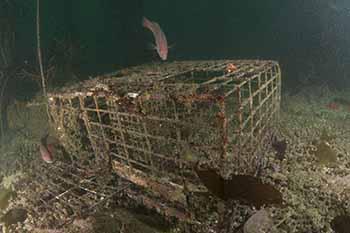 This is a headline from a recent article from National Geographic.  We here at Ocean Defenders Alliance (ODA) are not at all surprised about this "recent" revelation because, unfortunately, we have seen so much ourselves.
I've been diving in California since I moved here in 1979.  I am not surprised, but I am constantly appalled by all the trash I see on the beach, on the surface, and on the sea floor.  All of our volunteers feel the same way. That is why we have dedicated so much of our time-and much of our lives-to do what is in our power to remove this garbage that kills marine life in so many insidious ways.

The scourge of disposable plastic bags has been well documented and discussed all over the world.  Just last week a Risso's dolphin died because it had 4 of these bags in its stomach and they blocked its digestive tract from allowing food to pass through;  it starved to death from lack of nutrition.  Not long ago a mighty sperm whale died with 150 pounds of plastic bags in its gut.  Both species hunt almost exclusively on squid, which floating plastic bags look just like.

If you are so inclined, read a really great book about sperm whales.  It's written by Richard Ellis, and is called "The Great Sperm Whale."  You'll find out just how uniquely intelligent these mammals are.  But unfortunately, they are not adapted to tell the difference between a slow moving squid and an equally slow moving "disposable" plastic bag. They suffer with their lives for our negligence. 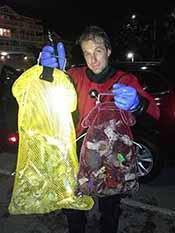 Our oceans are in deep trouble and if we are honest with ourselves: most of us already know why.  It basically gets down to human neglect.  We use the oceans (and most of the rest of nature) as if they can absorb anything we throw at them and in them.  From excess pollution, to degraded wetlands and coastal shorelines, to overfishing, to oil, gas and mineral extraction-we humans are destroying the very thing that makes living on this planet possible: THE OCEANS!

It's time we stop abusing our seas. While we here at ODA do all we can to remove all this garbage from our local waters, we can't go much deeper than 130 feet.  The average depth of the oceans is 14,000 feet.  The deepest part is near Guam-called the Mariana Trench-and plunges to 36,000 feet!

We must stop putting any more of our man-made debris into the water.  I read recently that a single plastic bag at a depth of 1,000 feet will most likely last 1,000 years!  That is because at that depth no sunlight will ever get down there to photo-degrade the chemical components, and there is no wave or tidal action to move it around that would break it into pieces.  It will just lie there, on whatever it landed on in the first place, likely to be mistakenly consumed by creatures that are finely tuned by evolution to eat anything that falls to the ocean floor. Oh, and when that plastic bag DOES finally break down, it will break down into smaller pieces of plastic that are even more easily ingested by various ocean wildlife. 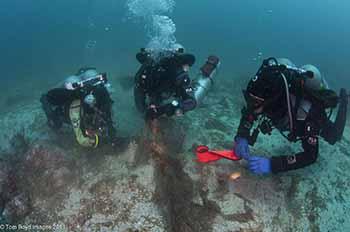 We here at ODA focus on removing any man-made debris that we find on or under the salty surface.  I hope you will join with us in our mission to create a "Debris Free Sea!"   Please call us, email us, and/or donate to help us now-and become a part of the solution!

To visit Nat Geo and read their article:
http://news.nationalgeographic.com/news/2013/06/pictures/130606-deep-sea-trash-monterey-canyon-seafloor/