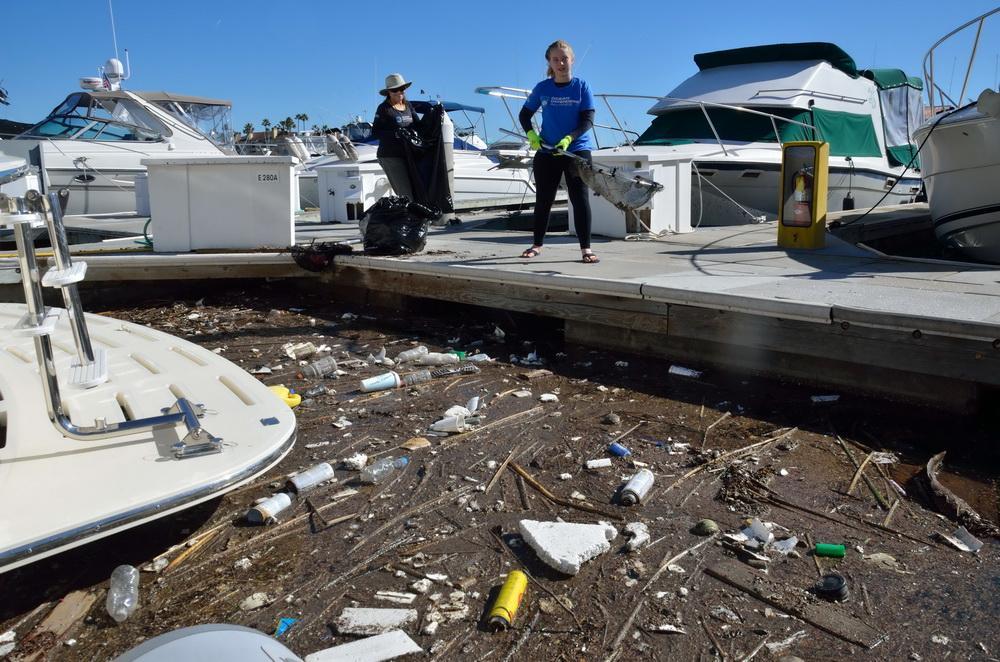 Under a bright and shiny sky, a few dedicated ODA volunteers got together in Huntington Beach to do what we could about a man-made disaster.

As most of you already know, scientists estimate that 8 MILLION TONS of plastics enter our waterways throughout the world every year!  And this has been going on for at least the last 50 years…

This is one of the reasons we at ODA do what we do: We do not want to see this stuff on our beaches, in our streams and rivers, but especially not in our oceans. But friends, that is where most of the trash you see in you streets, parking lots, and river beds ends up. It all washes downstream when it rains.

When It Rains It Pours…Garbage

And oh my how it rained here recently. On Sunday January 15th, we got 3.5 inches of the life-giving rain in 24 hours!  The downpour of water overloaded the systems that are in place to impede the ability of plastics to enter our harbors, wetlands, and seas.

We got to see, firsthand, how quickly this can happen when some of our volunteers inspected the water around the boat slips in Huntington Harbor. When we looked up, we saw the beautiful vista of the snow covered mountains that ring the Los Angeles basin, but when we looked down our eyes were assaulted by all the trash floating on the surface of the harbor waters. And who knows what lurks below? 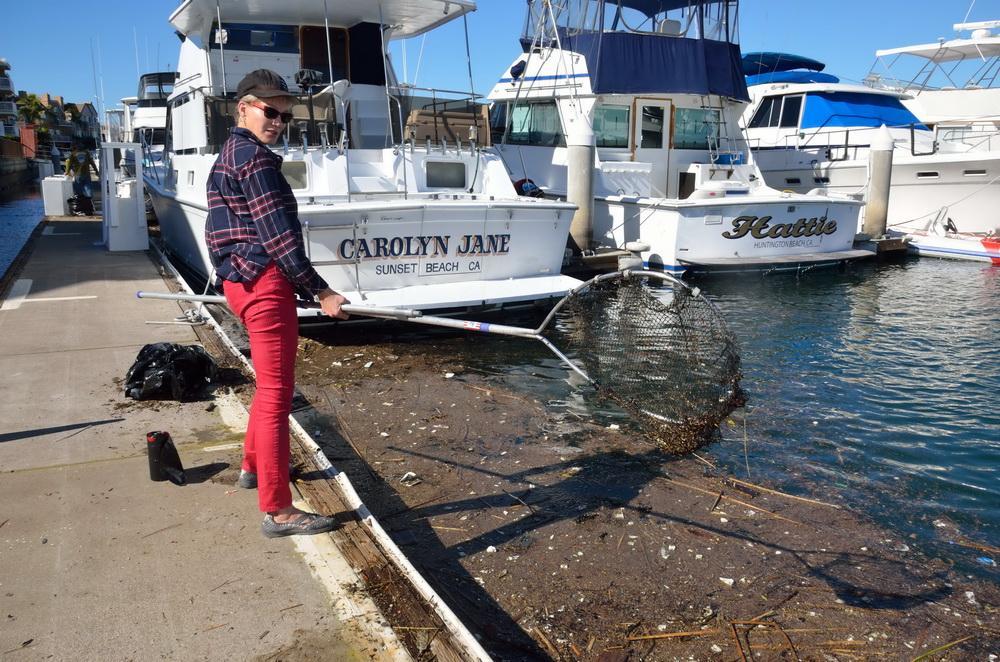 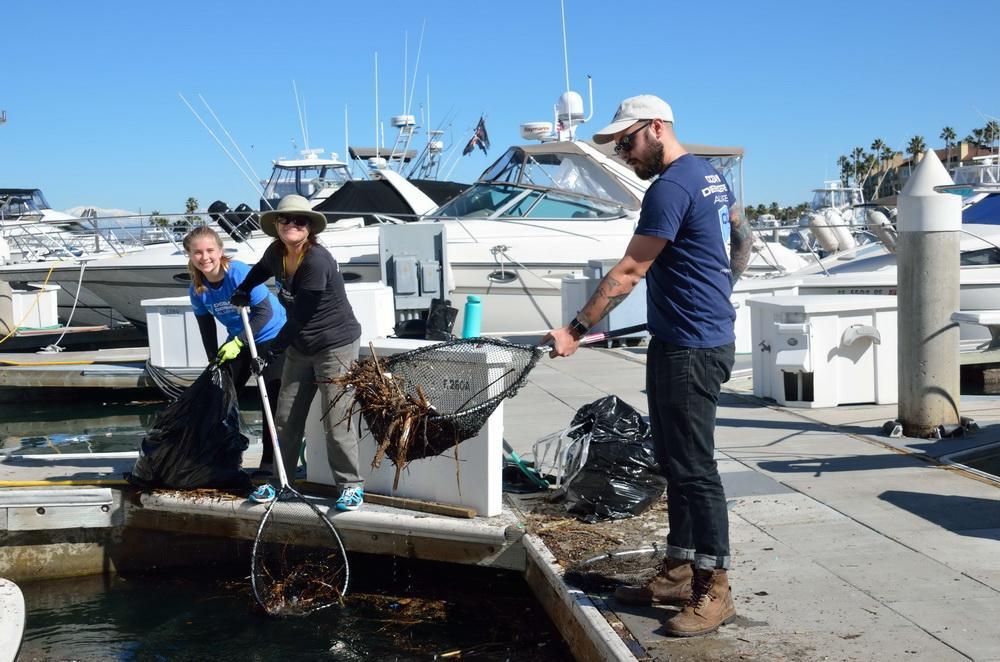 Darlene Summers and I had been here earlier in the week in ODA’s newest boat, a 12-foot RIB (Rigid Inflatable Boat), and we removed a few hundred pounds of debris. But I could see that we were just scratching the surface, so to speak. 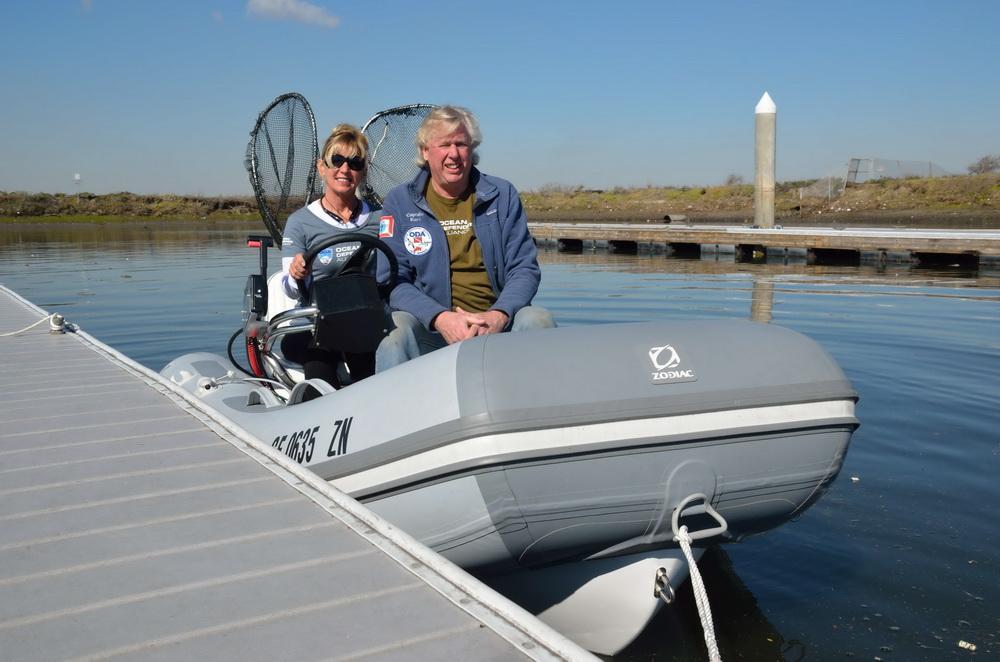 Ocean Defenders to the Rescue

We tried to organize a cleanup party for Sunday, January 29th. While we didn’t get very many people to show up, the folks that did, worked very hard and made significant progress. ODA is so thankful!

Our Plastic Patrol Heroes are: Lisa Davis, Adam Fram, Pamela Meadows, Gillian Murphy, Linda Nicholes, and Jim Lieber. We met up at the entrance to Peters Landing Marina. After posing for our group picture (while we were fresh and clean!), we each grabbed our scoop nets, and headed into the marina. 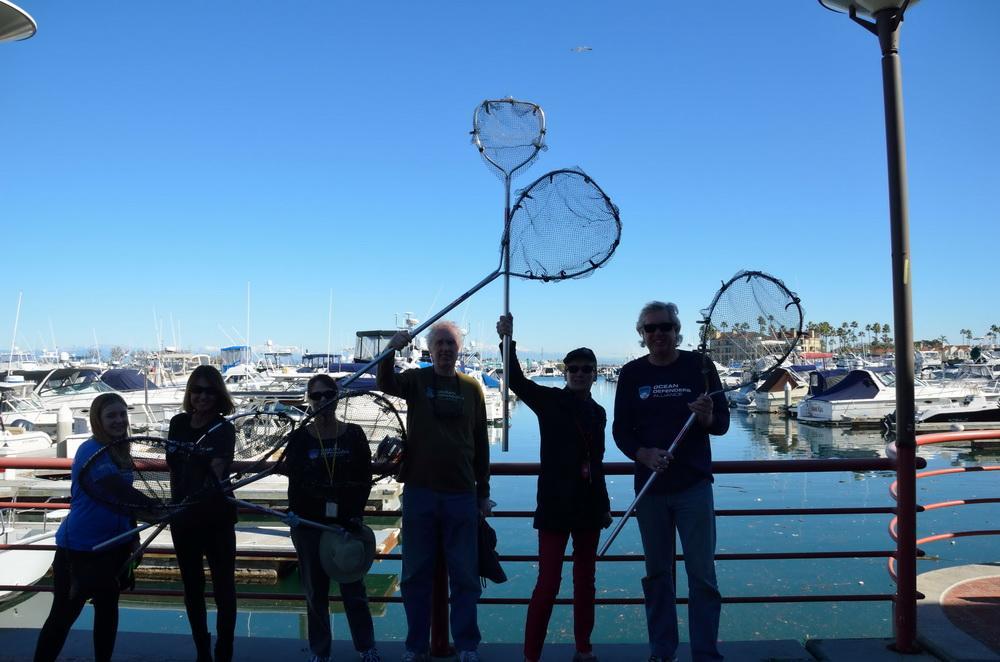 Prior to organizing this effort, I had contacted the manager of the marina, Scott Seaton. He really appreciated ODA’s efforts to do something, ANYTHING, about this mess that is inundating the harbor. He even gave us gate keys, which allowed us access to all the boat slip areas in the marina. Thanks for working with us, Scott!

Jim and I brought our two small boats over to the area so we could tackle the debris from the open water as well as from the docks. As it turned out, we really didn’t need the boats because there was so much floating plastic and garbage right alongside the docks and in the boat slips. 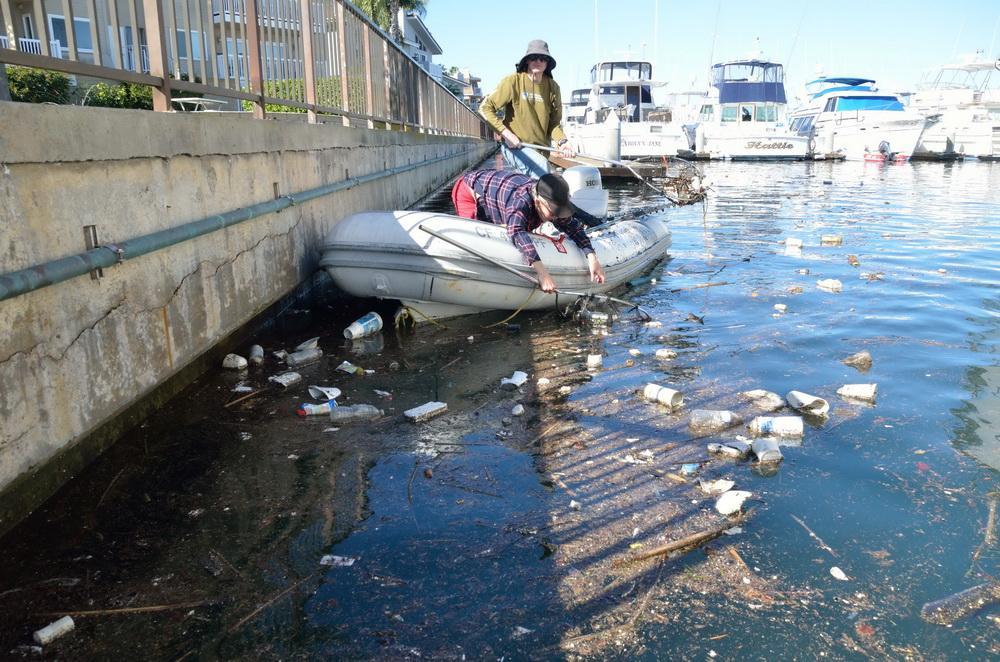 Even though there were only seven of us there, we got way more out of the waters than I had anticipated:  Well over 1,120 pounds!

The Power of Two

Awesome ODA Volunteers Cheryl and Marc McCarthy tried to make this cleanup, but were unable to because of family commitments. But as a show of solidarity, they went out on their own and removed 40 pounds of plastic from the beaches of Dana Point.

They removed trap remnants and lots of trash! Here's a few of their pictures: 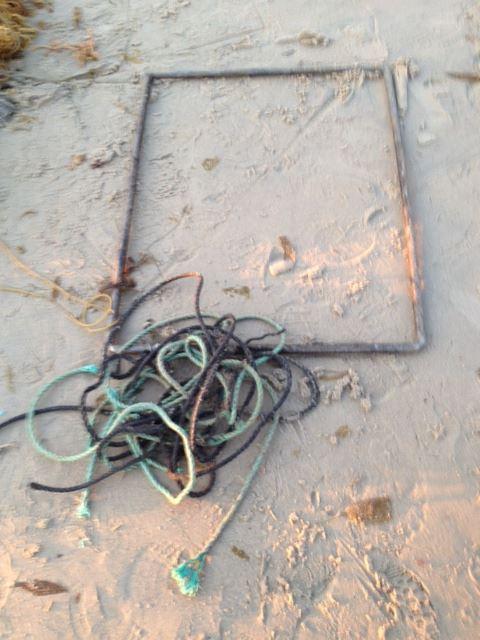 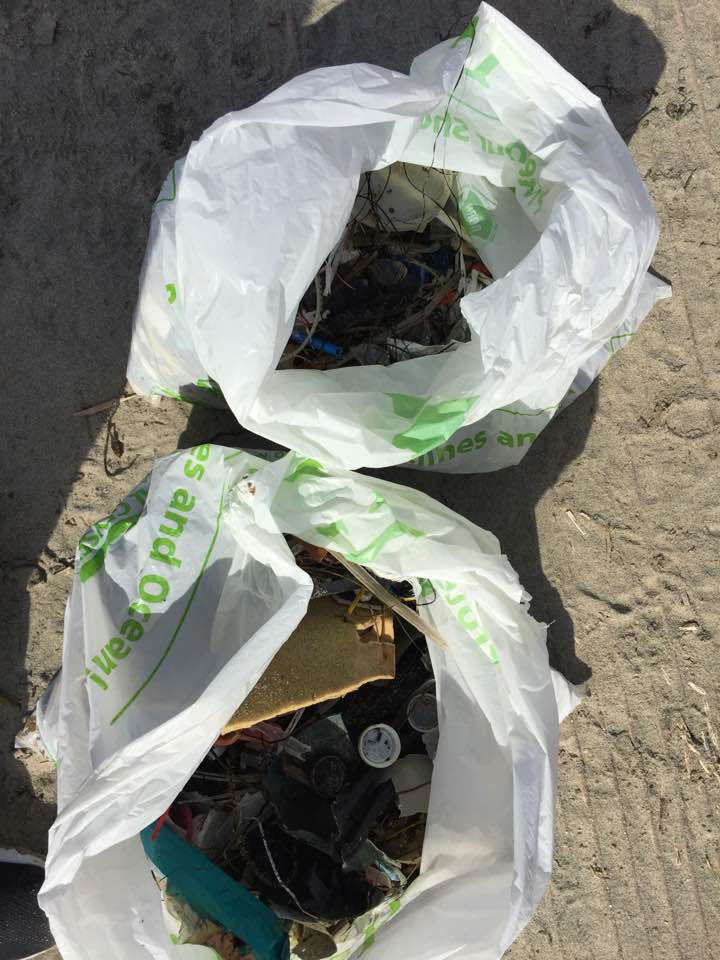 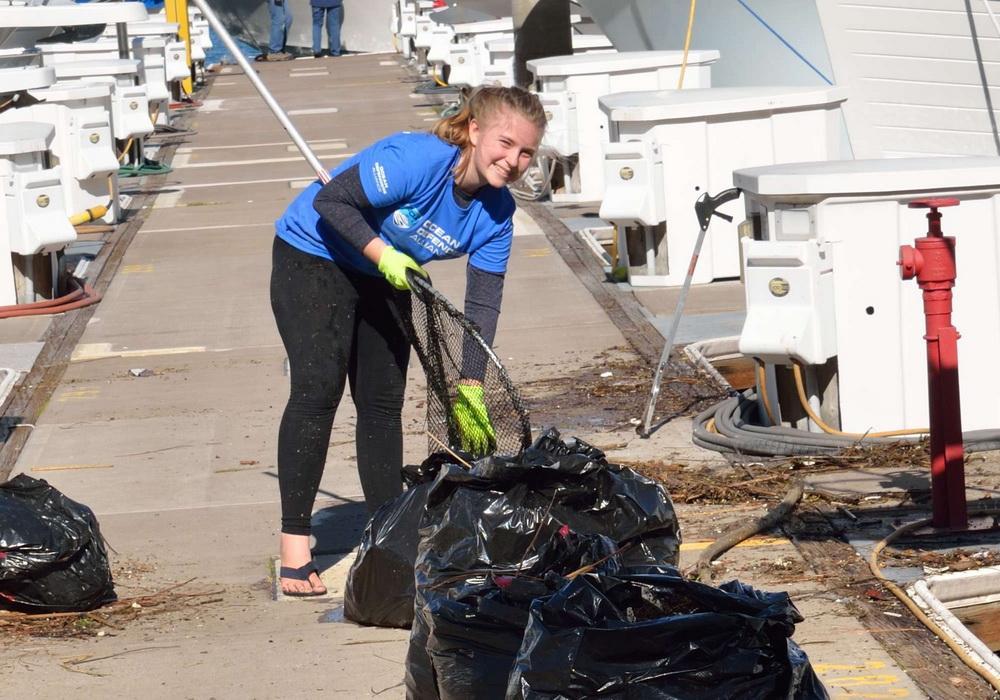 I want to thank each one of the volunteers, but especially one special young lady. Gillian Murphy is only 15 years old, and as part of a school project she wanted to come and help an Orange County-based organization do some volunteer work.

Gillian was a fantastic help, never complaining, and worked hard the entire four hours we were there. She was a real pleasure to be around.

It is so nice to see a young person take an active interest in doing what is right for the planet. The earth (AND oceans) need you!

We are going to try and do this again next Sunday, February 3rd. Stay tuned, and hope to sea ya next weekend!