With our flagship the LegaSea running as never before, we got a boatload of people to go out with us on Sunday, June 10th.

What was exciting about this adventure was that we had more women than men.  That is a first for us!

We had two new volunteers come out with us: Sarah McCourt and Shani Tennyson.

Sarah is an artist who loves the oceans and wants to get hands=on experience with a group that is doing something tangible to help our oceans.

Shani is a dive master, and you can tell she’s got salt water in her veins!  She helped us on deck this time, and will be diving with us next time out as she now knows how we work as a team both above and below the water.

Nice to have Shani and Sarah on our team. Thanks for your great work, ladies! 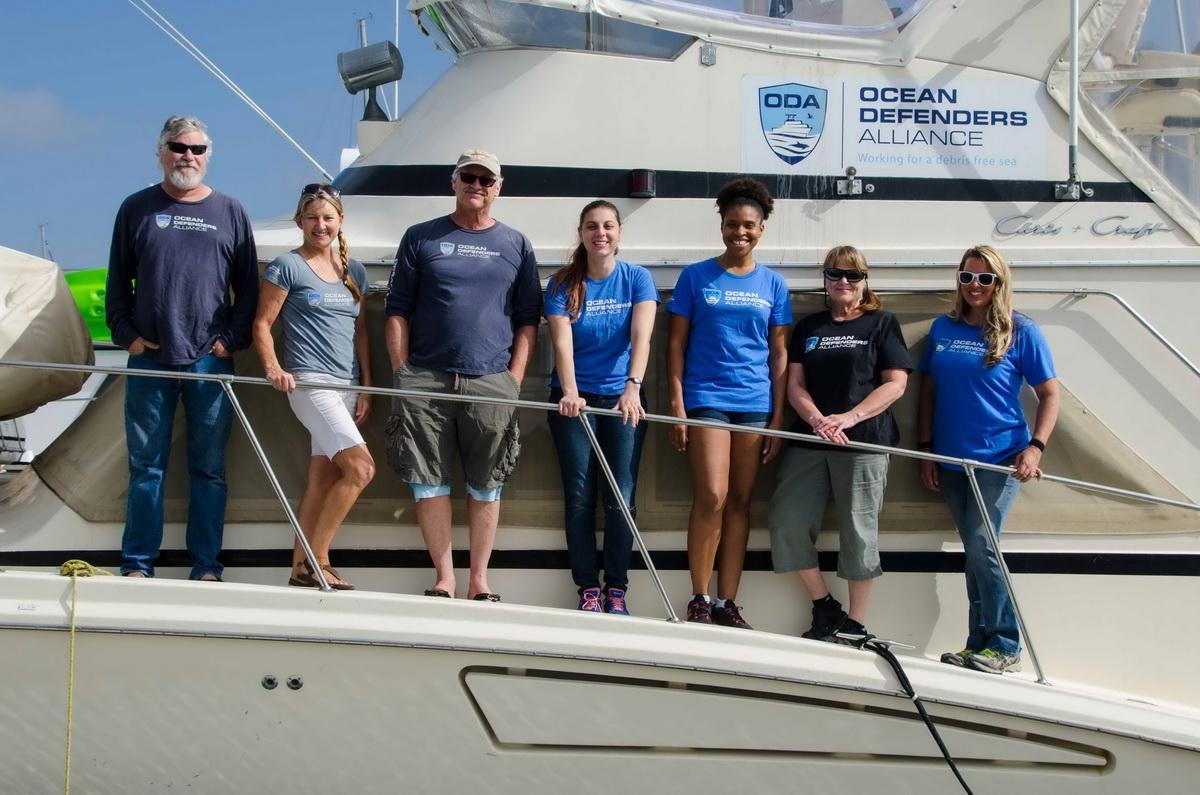 As we left our slip in San Pedro the sea surface conditions looked pretty good.  But, once we got outside the Los Angeles Harbor things started to change.  We were facing in to 3-4 foot waves.  They were spaced pretty far apart, so it wasn’t choppy, just a bouncy ride.

We headed up the Palos Verdes coast to Point Vicente, about 10 miles away. 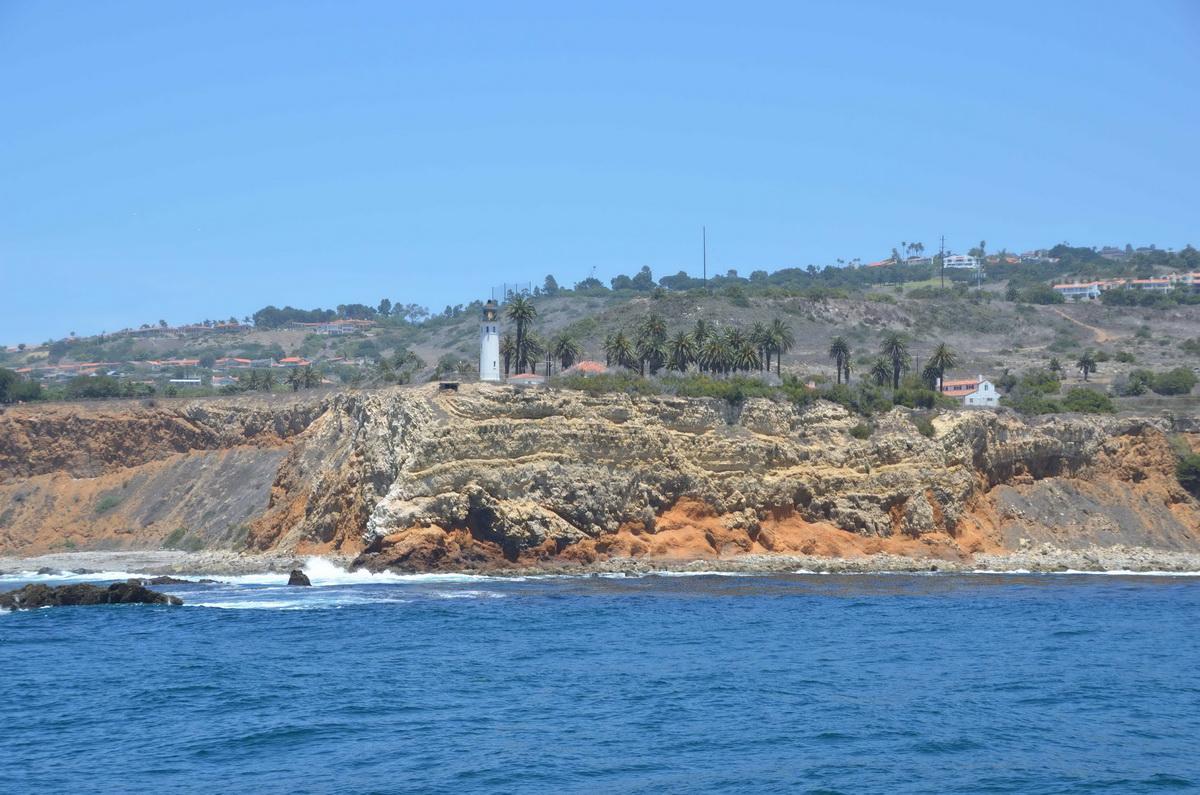 Point Vincente is a Marine Protected Area (MPA) which is, per the California Department of Fish and Wildlife (DF&W): a type of marine managed area (MMA) where marine or estuarine waters are set aside primarily to protect or conserve marine life and associated habitats. California has a coastal network of 124 protected areas designed to help increase the coherence and effectiveness of protecting the state’s marine life, habitats, and ecosystems.

As we were motoring along, we started seeing some trap markers on the surface.  We stopped by them, marked the spots with our GPS, took some pictures and then continued on our way. 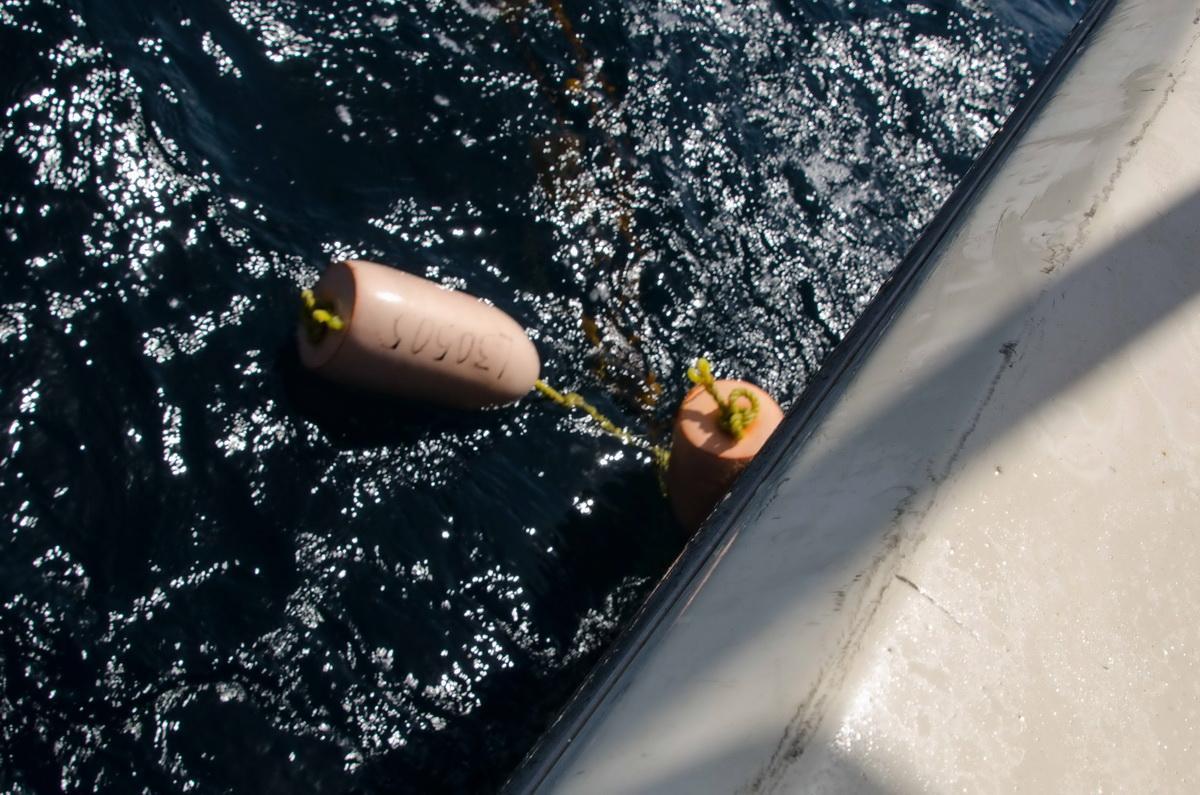 I will give this information to the DF&W, who will then let the trap owners know that they need to remove them or they will receive a citation.

This Trash Has Got to Go

Mylar balloons seem to be multiplying; we’re seeing more of them out there than ever before.  Last time out we removed 16 of them, but because the seas were so blustery this time, we had a hard time seeing them, although we did manage to pull eight out of the water. 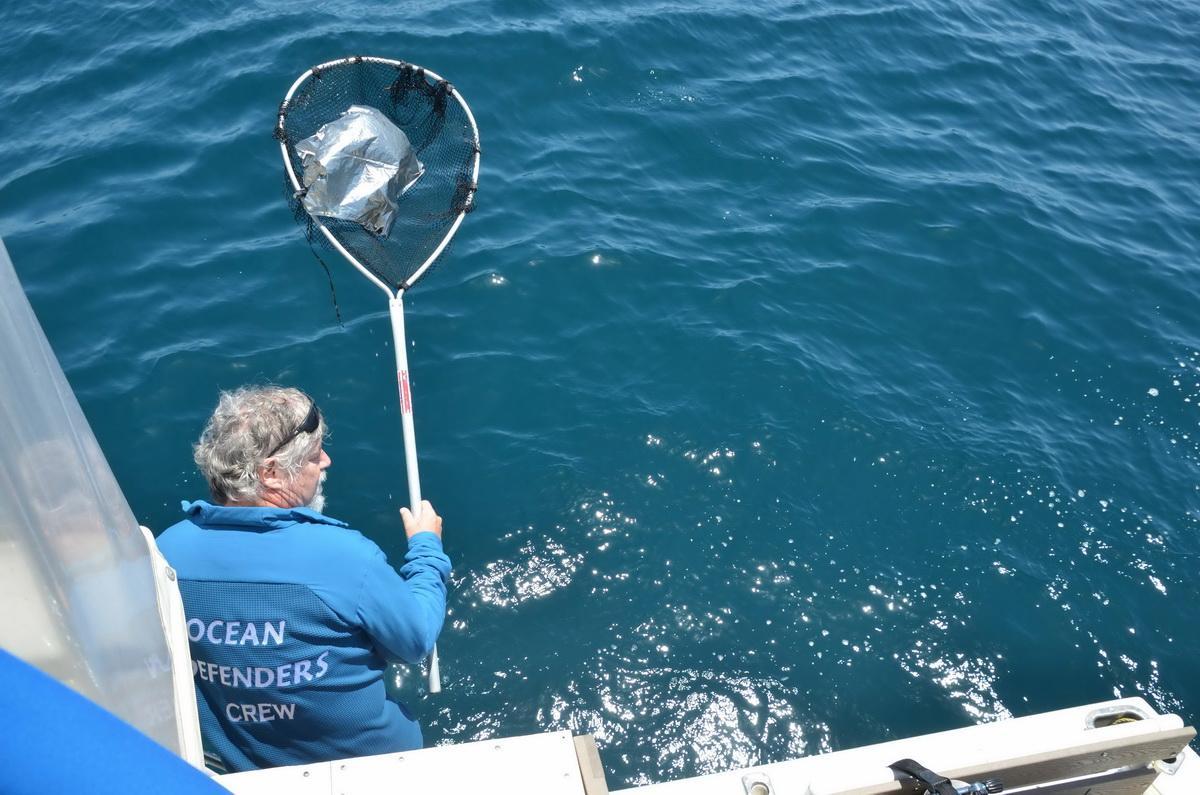 Like plastic bags, balloons are a real hazard to marine life that mistakes the deflated mylar or plastic as some kind of food. Earlier this month, a dead whale was autopsied in Thailand and was found to have 80 plastic bags or approximately 17 pounds of trash in its stomach! We humans need to do a much better job of keeping trash out of our waterways, beaches, and oceans. We’d love to have you come help ODA if you can! If you can’t volunteer, you’re financial support will keep our tanks full of gas and the boat out on the water. Thank you!

We went to the north/west boundary of the MPA, dropped anchor, and Kim and Bob got suited up.  We were in 70 feet of water, and about 100 yards away from a thick kelp bed.  The deck crew handed them their scooters (Shani pictured below handing Bob the equipment). 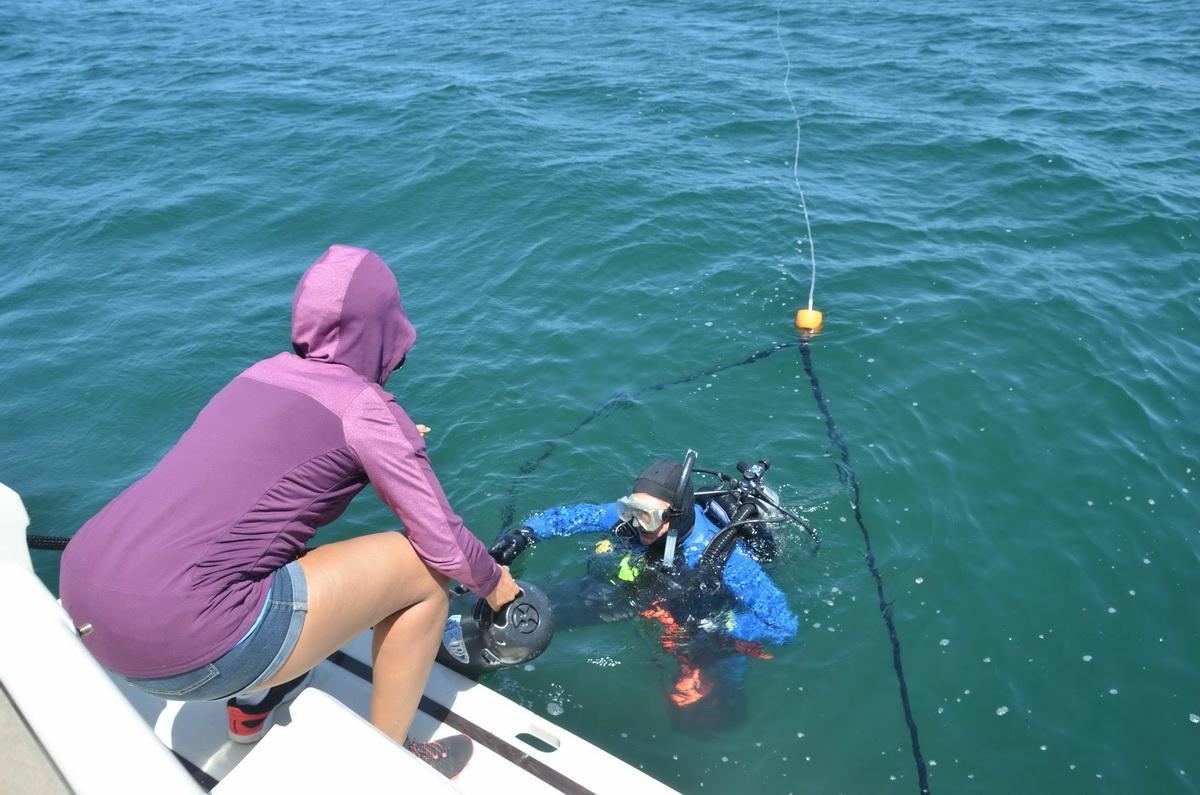 Kim and Bob motored on the surface to the edge of the kelp bed. When they dropped down, we didn’t see them again for almost an hour.

It turns out that the underwater visibility (UW vis) was really bad, at four feet or less.  So, not only did they have a hard time seeing any traps down there, but they had to keep track of each other too.  No easy task when your head is on a swivel while looking for man-made debris AND making sure you don’t become separated!

But at the end of the dive, when they broke the surface and they had two bright orange lift bags floating right beside them.  Yahoo!  They nabbed another abandoned lobster trap. 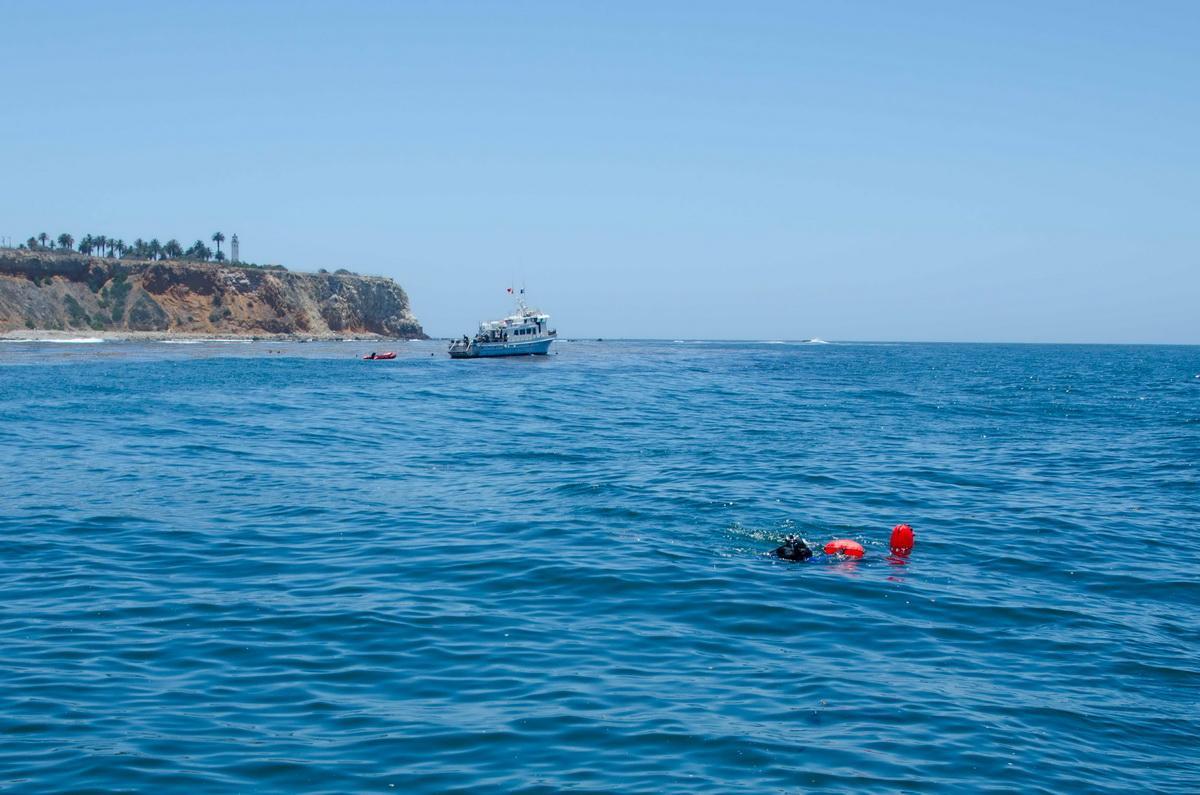 During this entire time, the waves kept getting bigger and the winds were picking up considerably to the point that the boat was really rocking and rolling, not fun.  But especially if you are prone to getting sea sick…

As Kim was about 200 feet from the boat, the battery in her scooter died.  She had to kick the rest of the way, while towing her scooter.  In the meantime, Bob held on to his scooter with one hand with his other hand on the lift bags and trap.  A real ocean hero in action! 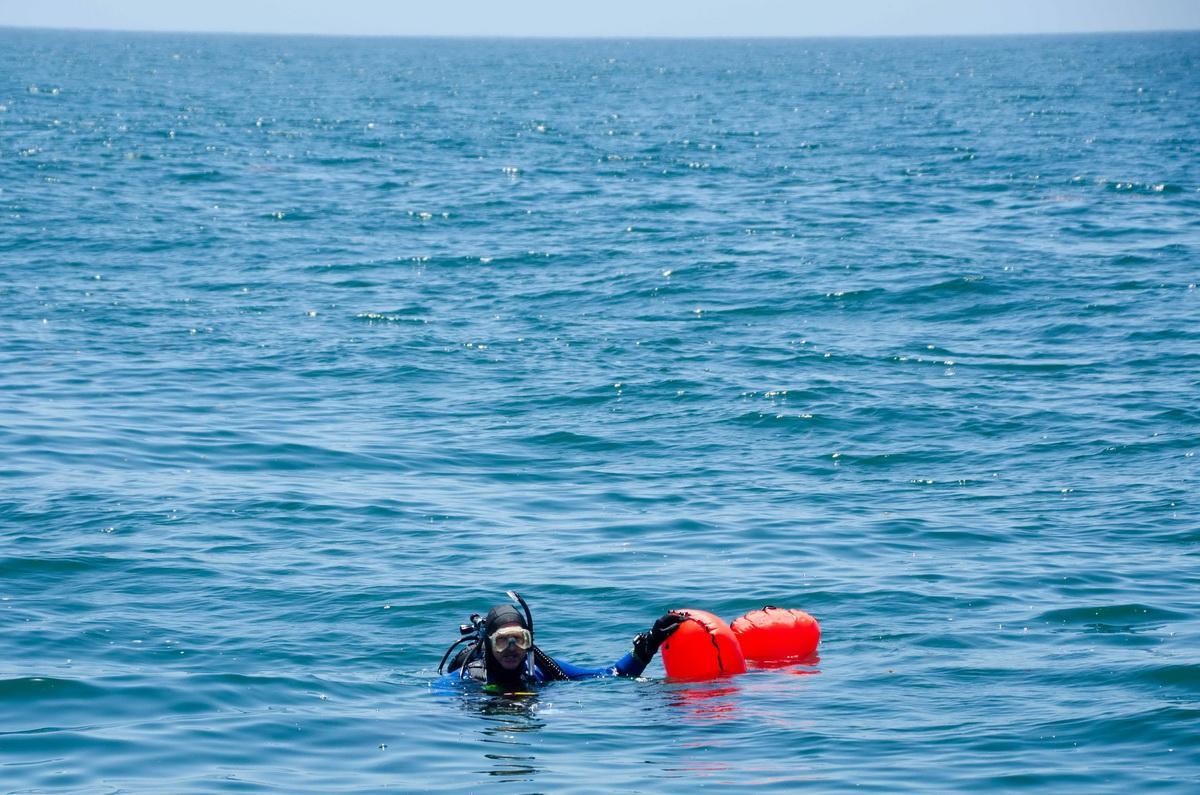 Soon everybody was back aboard and we pulled the trap up onto the front deck. Below see SCUBA diver Kim with the recovered lobster trap. This ghost gear will never entrap or entangle animals again! 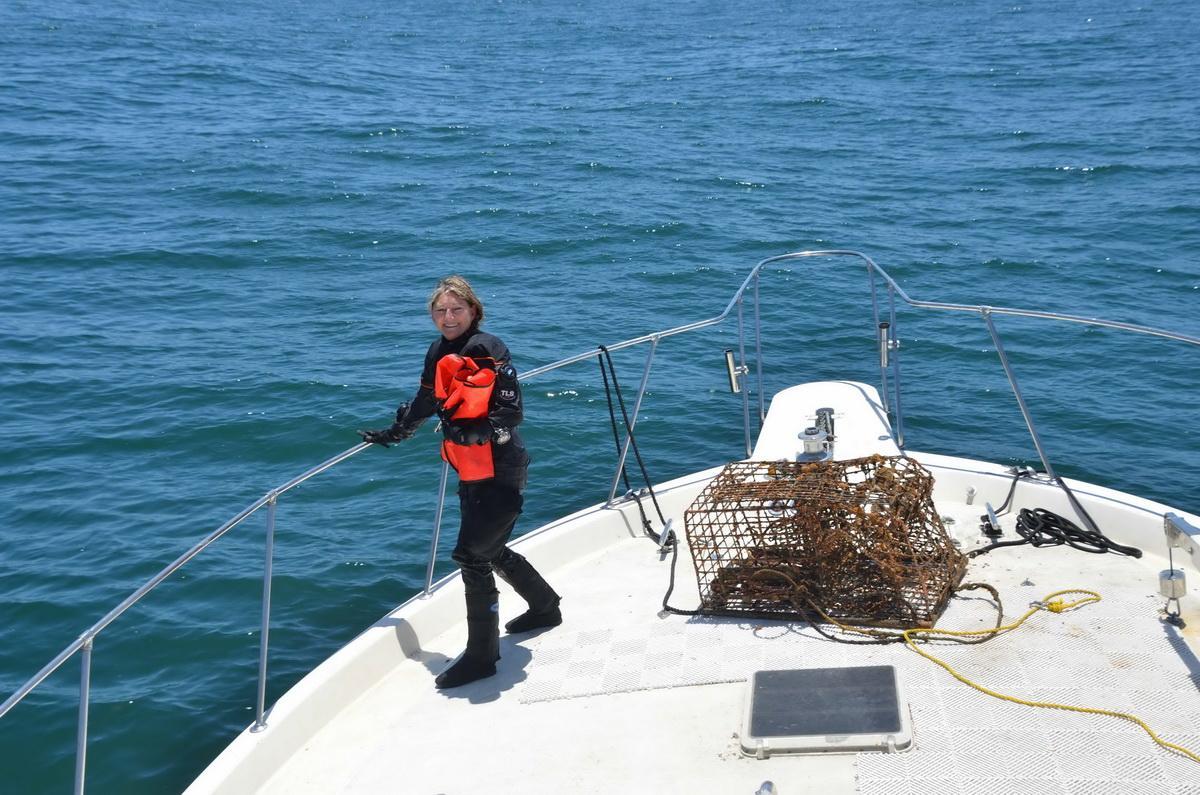 Because the seas were so trying, we decided to call it a day and headed back to port. 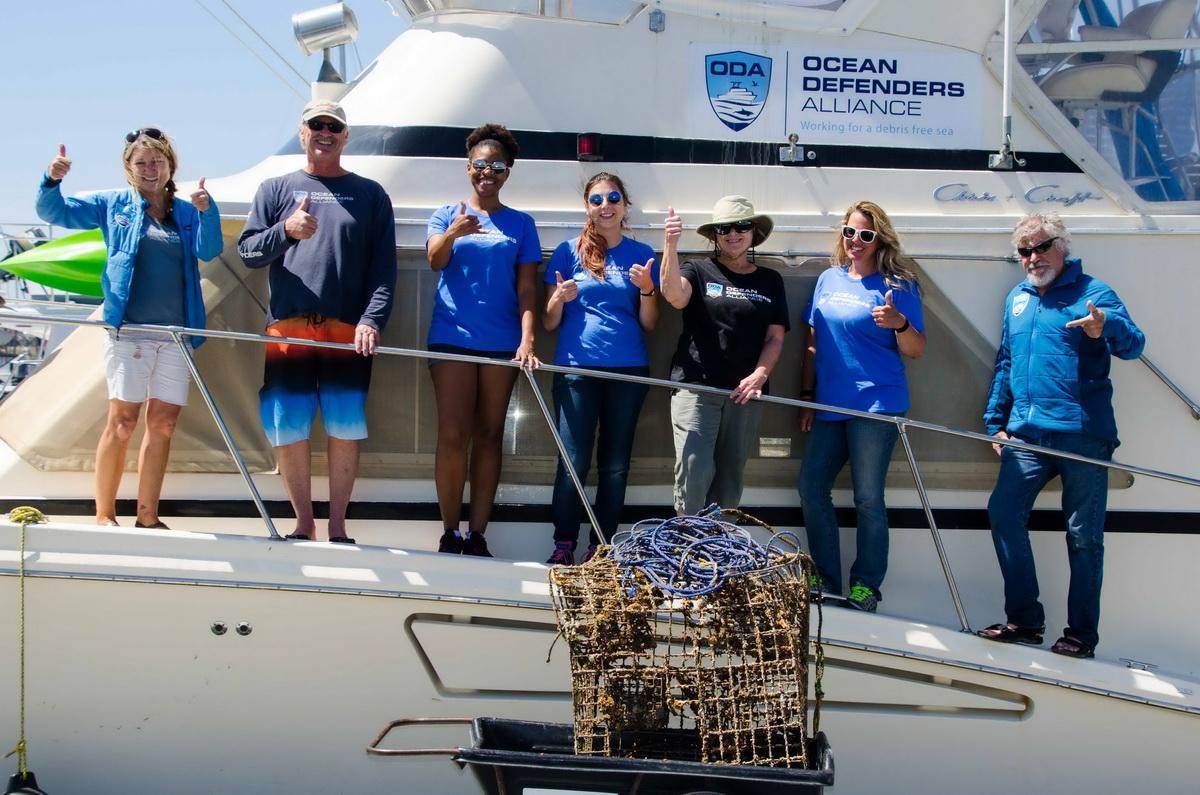 It was not just a challenging day on the water due to the rough seas and low vis.  The boat engines ran great, but our generator kept conking out.  Now, we have to get it diagnosed and fixed before we can resume operations.  Thanks to your financial support, we will get this fixed ASAP, and get back to doing what we love to do: Remove trash and ghost gear from our coastal waters to make waters cleaner and safer for marine wildlife!