We’ve been on a roll lately!

First, we removed five traps on May 20th (I’ll provide a link to our article Killer Traps Kill No More at bottom of this page) and so on May 30th we headed down to Laguna Beach to see if we could continue our lucky streak.

As we took off from our slip in San Pedro, we motored 32 miles down the coast to look for some traps that were reported to us as being abandoned. You can see on the map below: we headed south from San Pedro (A) to Laguna Beach (B). 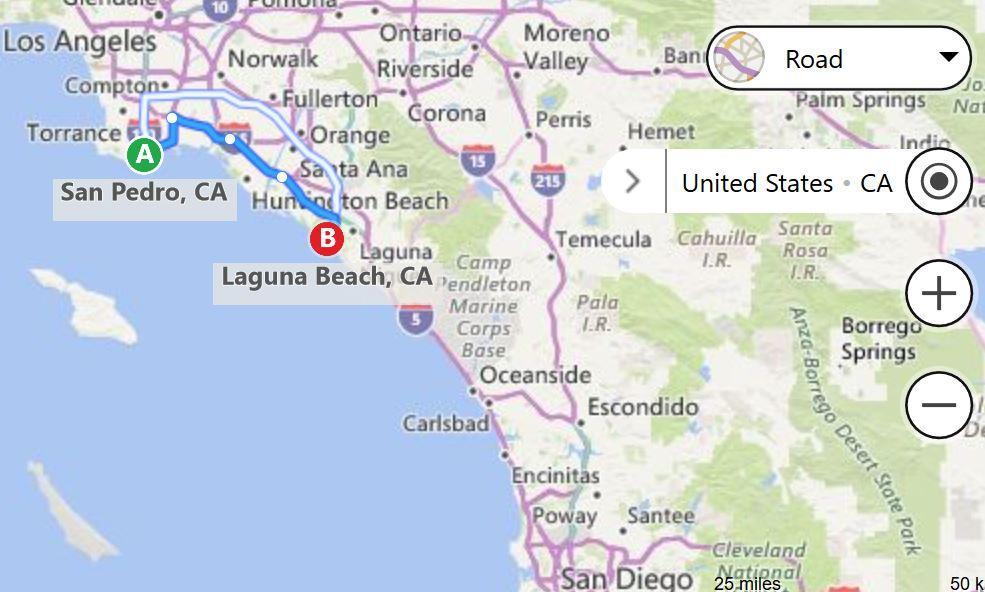 Thanks to our reputation and online debris reporting form, we received a report from someone who is a paddleboarder.  Thank you, Jeff!

From Jeff’s message, we learned that he had called the Department of Fish and Wildlife (DF&W) and left voicemails with them about two trap buoys he had come across on one of his adventures along the coastline.  After he hadn’t received a response from them, he contacted ODA to see if we could do anything about them.

I quickly called my main contact at DF&W and he said he would put me in contact with the officer who oversees the enforcement of the department in Orange County.  When we finally did talk one-on-one, I gave him the GPS locations that Jeff had given to me along with the identification (ID) number that was on both of the trap buoys.

The officer then told me that he would contact the owner of the traps and tell him to remove the traps or else face a fine.

I contacted the DF&W officer a few weeks later to see if the traps had been hauled out or not.  He told me the owner visited the site but could not find them.  So, we fueled up the LegaSea and headed down the coast.

The GPS numbers that had been provided indicated that the traps were on the far south end of Laguna Beach right on the border with Dana Point.  Only 32 miles away…

The divers for this outing were: Kim Cardenas and Bob Walls.  On the deck were Jeff Connor and myself. 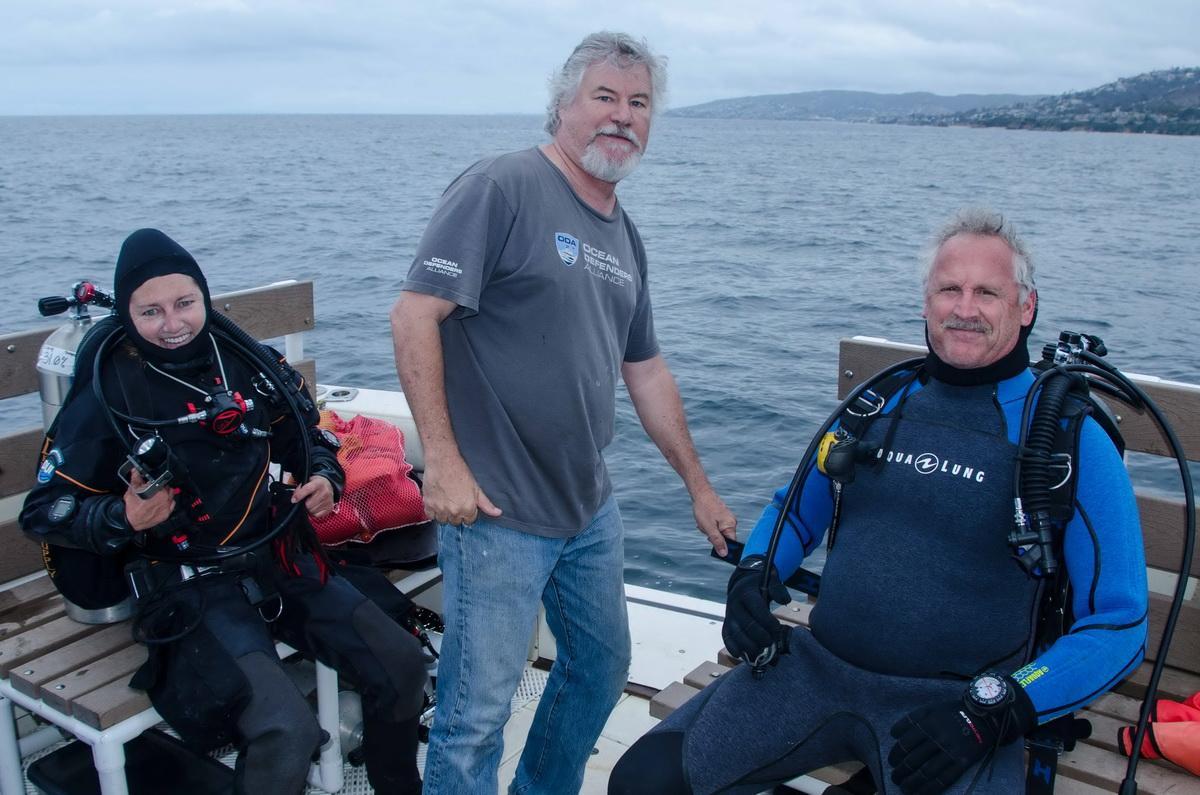 The day on the water was really nice; we had one- to two-foot waves and hardly any wind.  We got down there in about an hour and a half.  The LegaSea’s new engines are built just for trips like this, and we were moving right along at 18-20 knots.  That’s about 23 mph, screaming for a boat the size of the LegaSea, which is almost 50-feet long!

When we got to the site, we looked around for about a half-hour and couldn’t find them either.  Then we started to expand our range and patrol in areas where I had seen traps laid in the past.

Just as we had started to give up hope, we spotted the buoys.  I could understand why the owner wasn’t able to find them.  The buoys were only visible when at the bottom of the trough of a wave.  They had been in the water at least for three months, and there was a lot of growth on the line that was weighing it down and pulling the buoys under.

ODA’s Veteran Divers Do Their Thing

Kim and Bob were ready to jump.  This was the first time they dived together, even though both have been diving with us for years.  So, they had a good conversation on who was going to do what on this mission.  They coordinated the direction they would go with their compasses, grabbed their underwater scooters and took off. 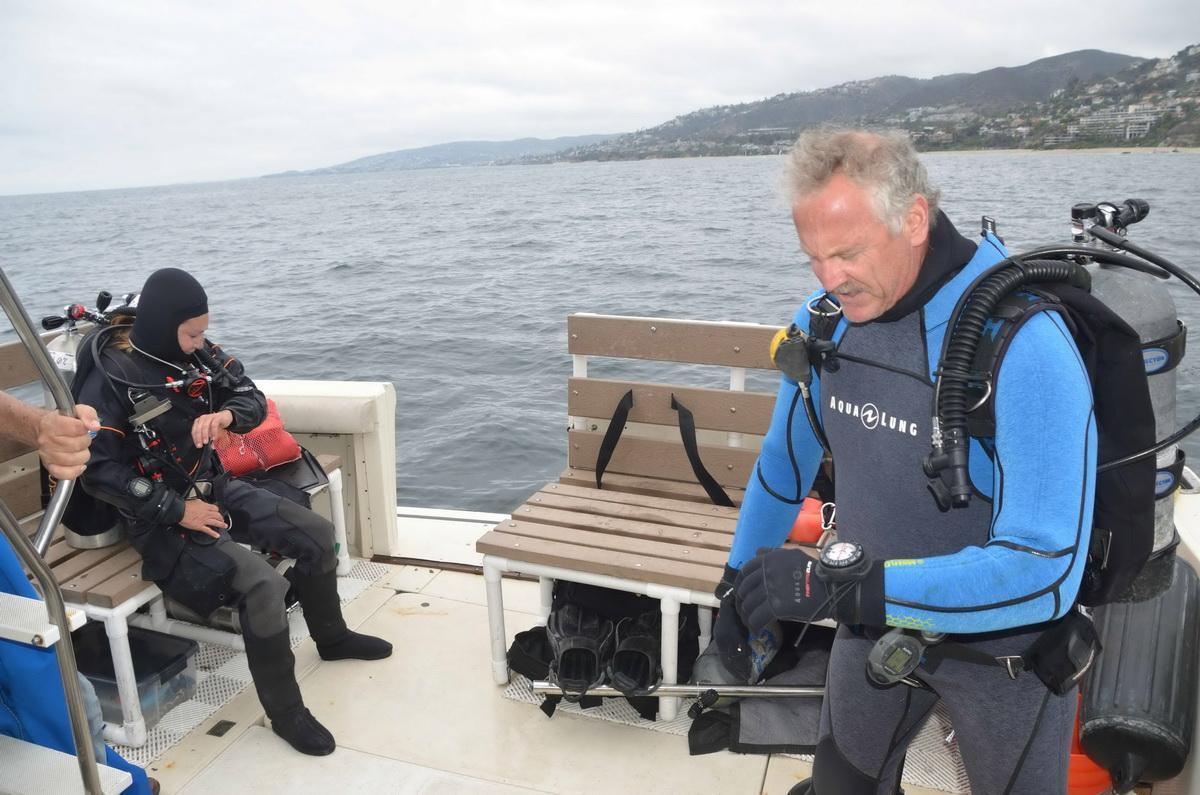 Turns out the underwater visibility (UW vis) was really bad, at less than five feet.  In order to be effective despite bad vis, we typically drop our boat’s anchor right at the GPS location of the reported debris. But even though today we had the anchor right next to one of the traps, they couldn’t find the second one. So, they attached two lift bags to the trap they had located and sent it to the surface.

Ten minutes later they surfaced and told us they needed to more instructions from us to find the second one.  We pointed them in the right direction and down they went.  Our experienced debris-removing SCUBA divers had the second trap at the surface in no time at all. Way to go, Kim and Bob! 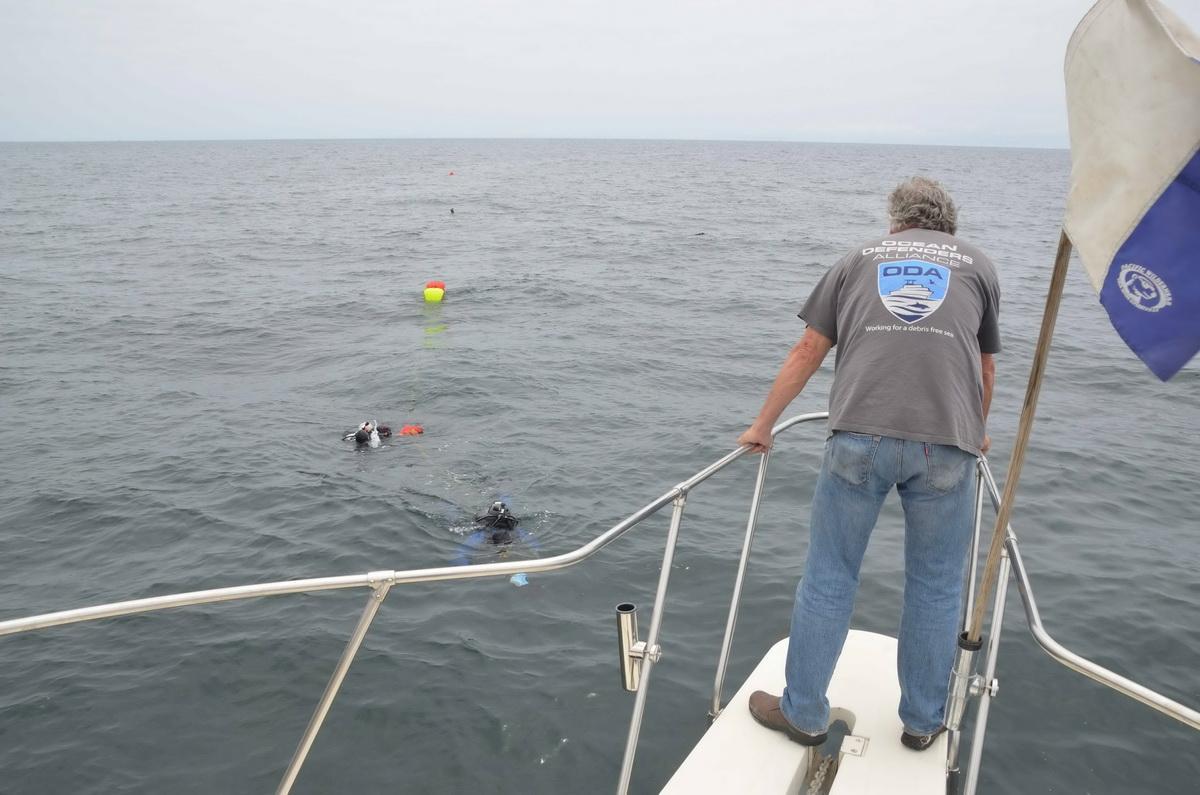 When they got back to the boat, we hauled the first trap up and onto the deck.  Lo and behold, there was a large rock crab in there!  They are about eight inches across and really neat, harmless critters. 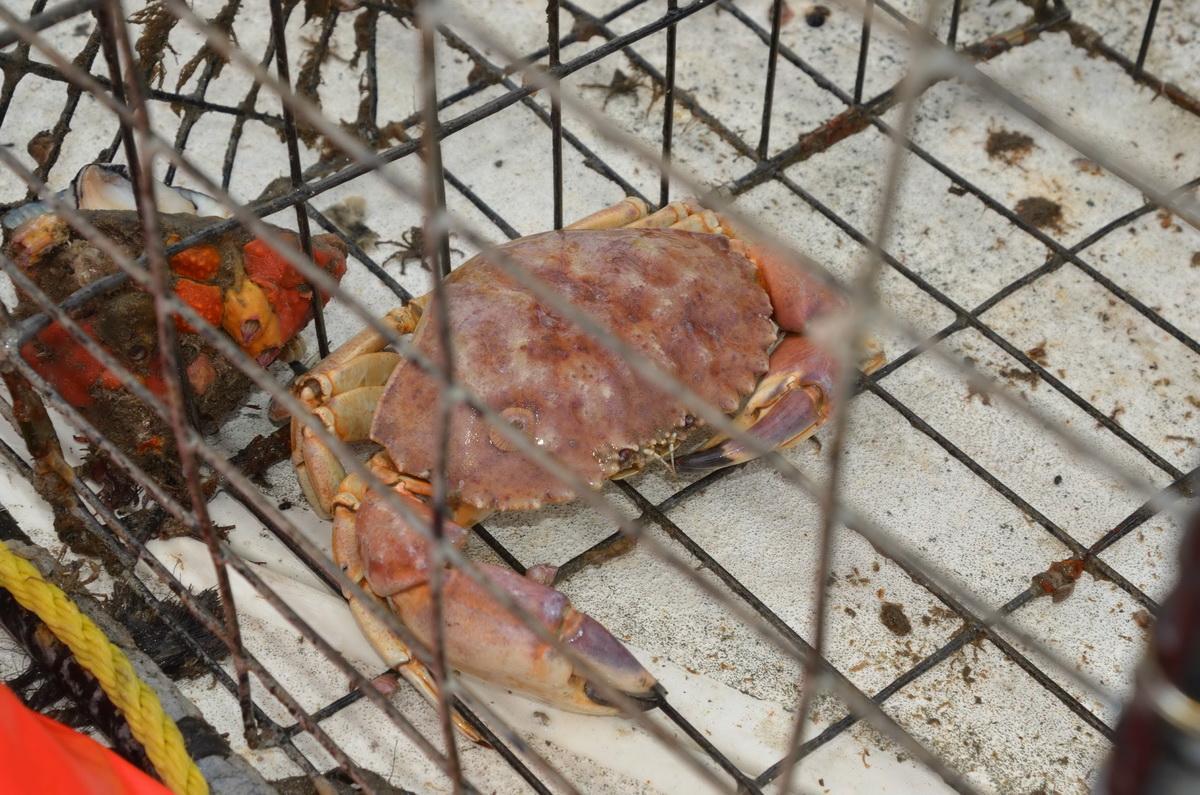 Kim and Bob climbed aboard and we pulled up anchor so we could get the second trap up.  This time there were two rock crabs in the trap.  Sweet!

As soon as we got the trap secured on the deck we posed for a couple of happy-to-be-freeing-animals pictures. And then over the side the crabs went, all paddling mightily to see who could get to the bottom first. ;-) 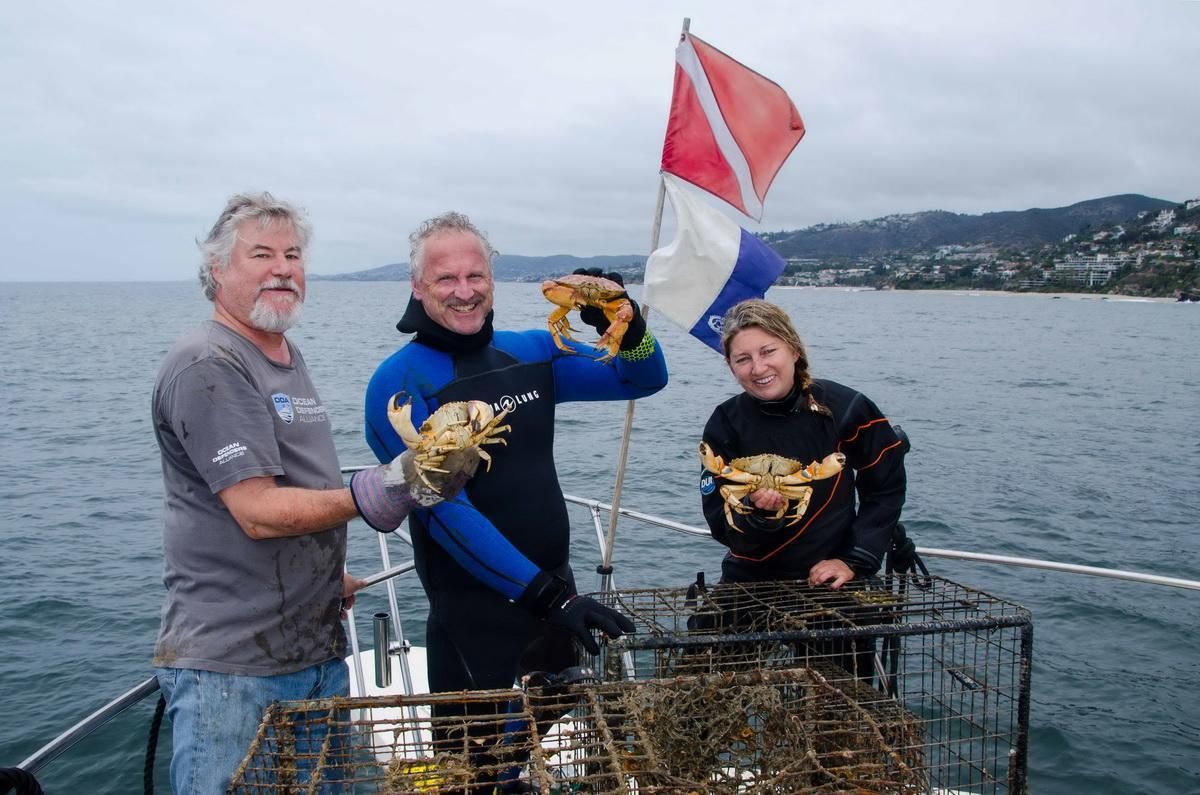 More Traps for Another Day

As we motored the 32 miles back to our slip, we saw dolphins in the distance, but wanted to get home and for a change we didn’t make the diversion to go see them.  Kim had another 100 miles (driving on the surface!) to get home once we got back to San Pedro.

While we were approaching LA Harbor, we spotted some trap markers that looked like they were for lobster traps.  Well now, isn’t that interesting?!  All lobster traps are supposed to be out of the water by now, as the lobster season had ended in March.

So, I marked the spot with our GPS unit. We planned to go back another day to investigate.

Back Out for Trap Reconnaissance

A few days later, on Monday, June 11th, Jeff Connor, Bob Walls, Vidia Walls, and I took the short ride out to the site and spotted the two buoys right away.  We took pictures of them, including shots of the ID numbers that were on the buoys. 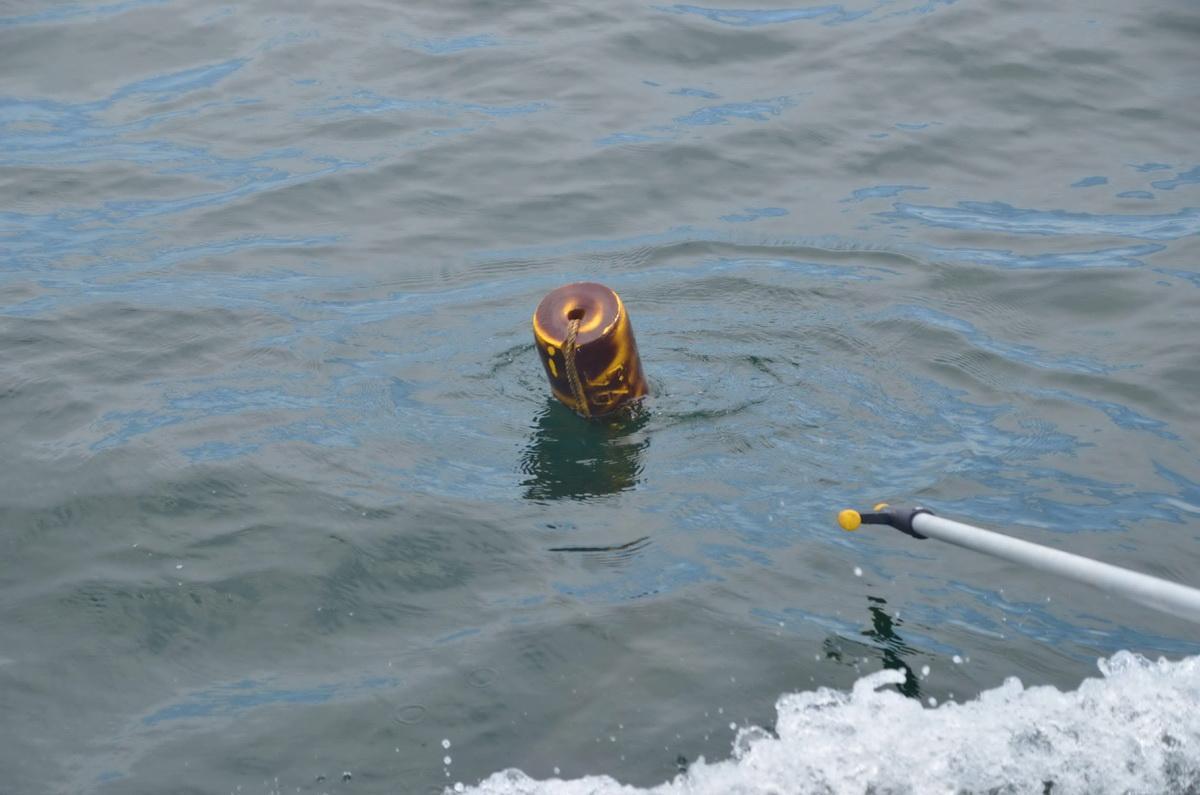 The DF&W issues each fisherman a number that’s required to be marked into each one of their buoys.  This helps the fisherman quickly identify his trap and allows the DF&W to contact the owner if there are any enforcement issues.

We continued on our way and then started seeing more and more of the buoys within roughly a 300-yard radius.  They all bore the same ID number.  We motored up to each one and marked them with our GPS.

While we were doing this, we saw dolphins a short distance away.  We were not going to let this opportunity pass us by this time and motored over to have a look see. Also, it was Vidia Walls first time out with us, so we wanted her to have the exhilerating experience of being amongst a pod of dolphins and having them ride the boat's bow. 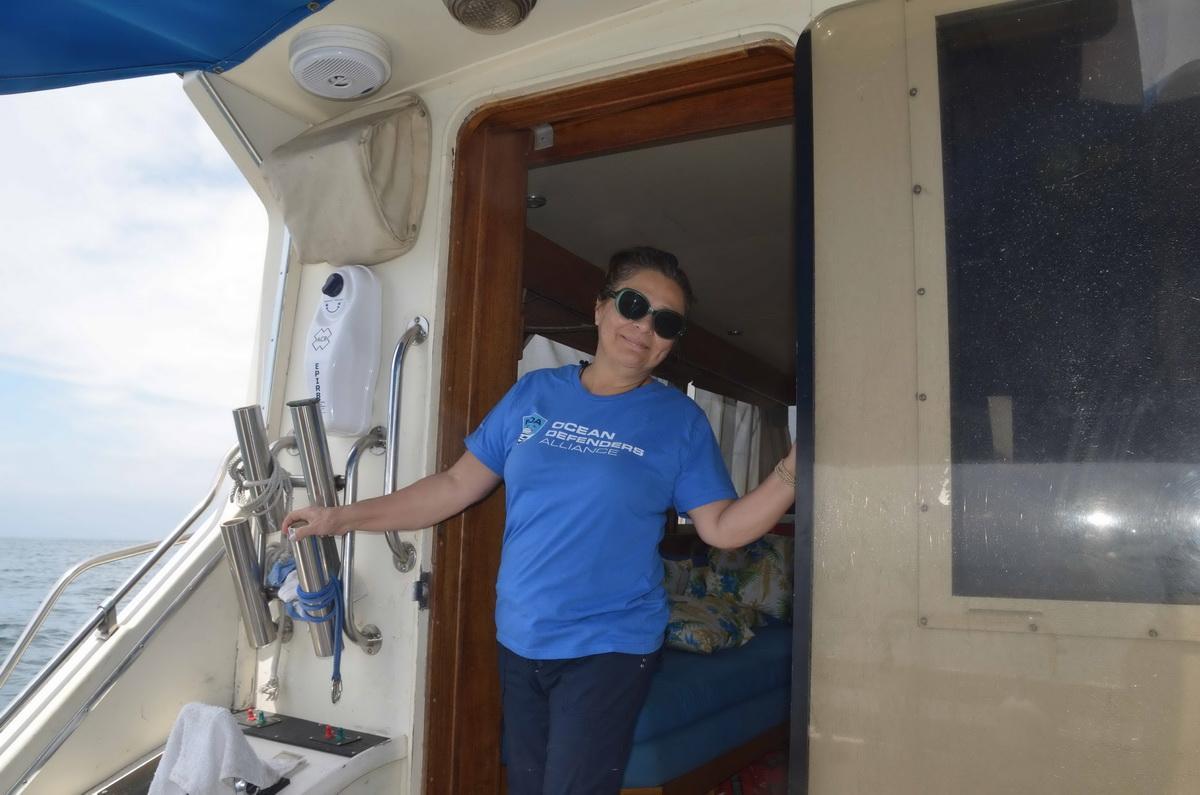 Bow riding is when dolphins surf in the wave created by the front point of the boat (the bow). Check it out below! 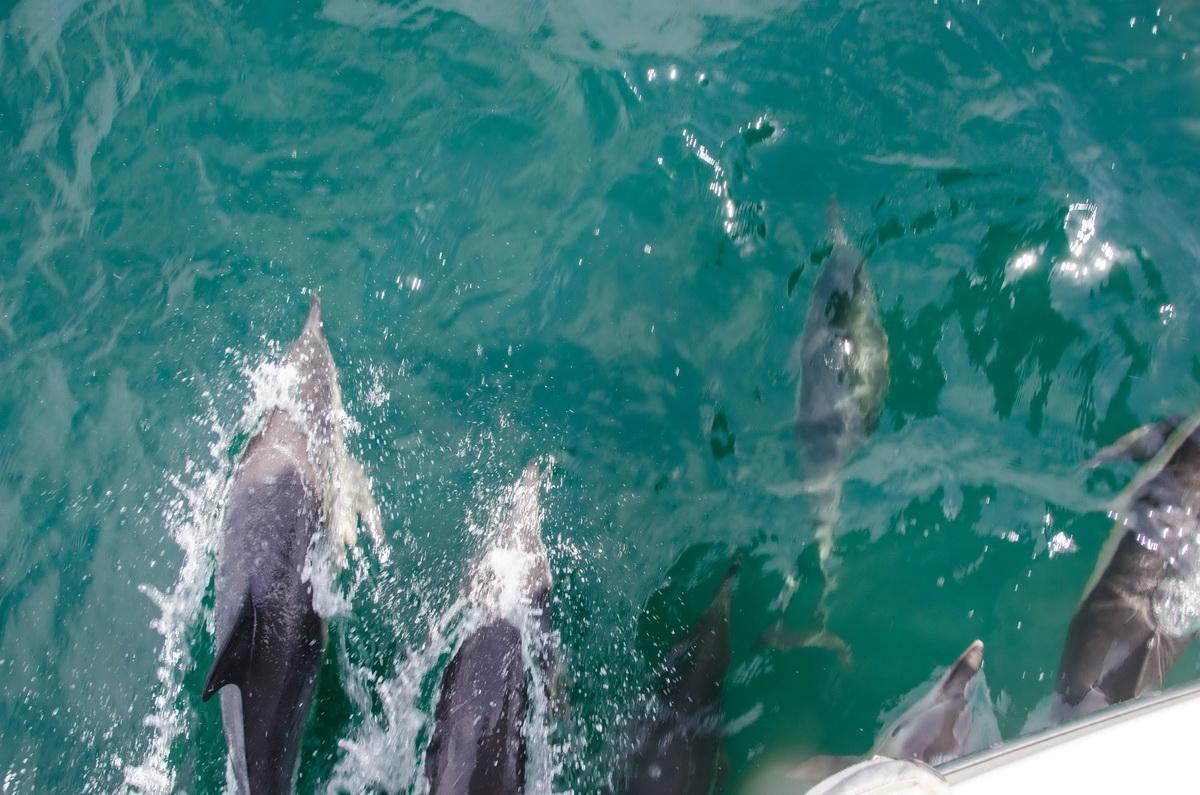 Then as we got closer we saw some whales in amongst the dolphins.  As one of them surfaced, its tail was lifted high and it went to the deep end of the pool.  We never did see those whales again, but I did see enough to make me think they were humpback whales.  In the meantime, we were being entertained by close to 1,000 common dolphins. 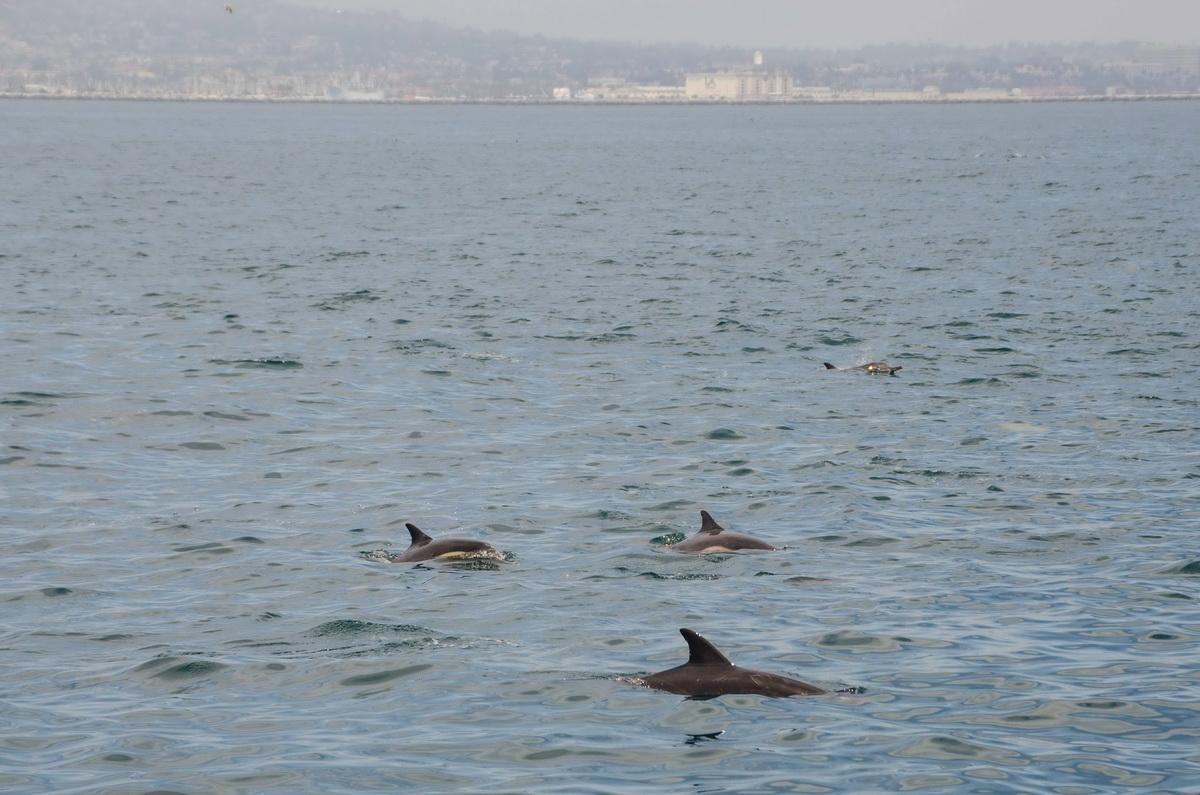 As we were enjoying this wildlife extravaganza, we were spotting mylar balloons all over the place.  Of course, we had to get them out of there before they get sucked out to the Pacific Garbage Patch, or an innocent whale or sea turtle ingest the balloons when they mistake them for a squid or jellyfish.  In all, we removed 16 of the balloons, and I have a feeling that was just the tip of the iceberg.

So, here we have whales, hundreds of (if not a thousand) dolphins swimming right near all these traps and balloons… 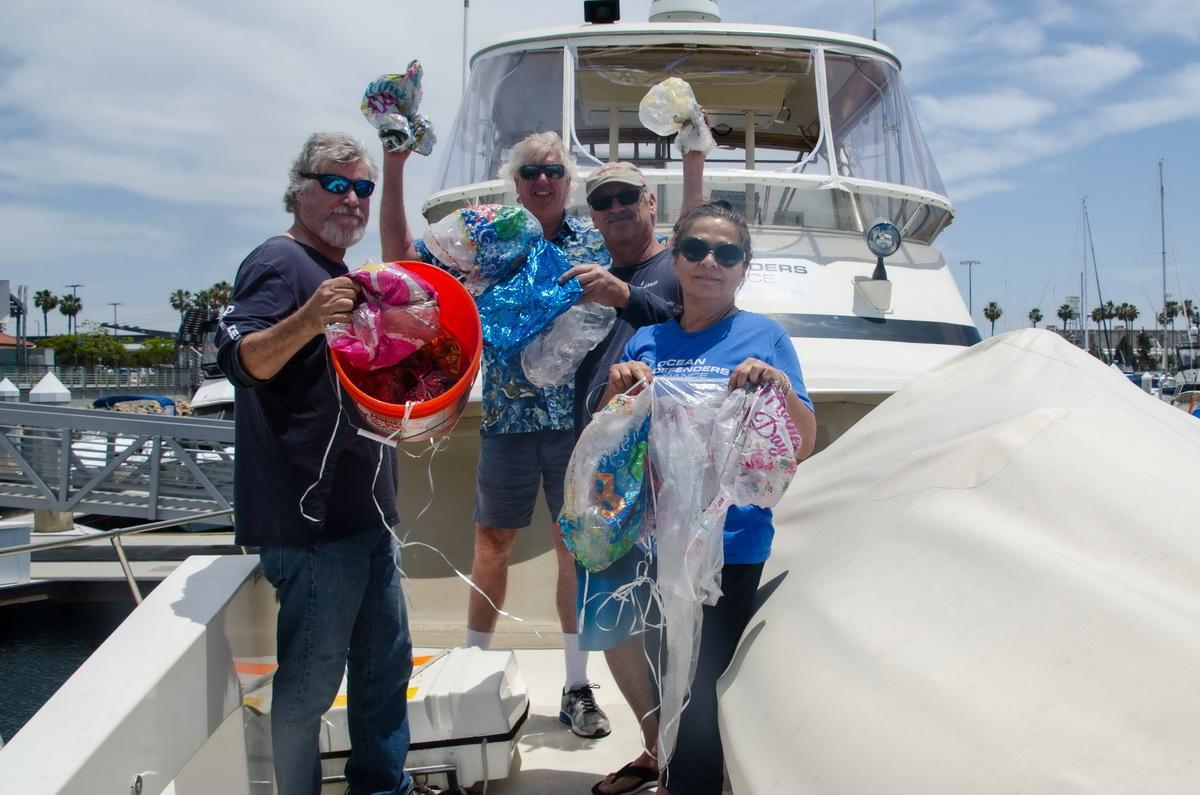 Knowing that five whales became entangled in fishing gear in just the month of May in California, we feel strongly that those traps need to be removed ASAP.

You may be asking yourself: “If those traps aren’t legally supposed to be in the water, why can’t ODA remove them?”  Answer: It is illegal for anyone to pull a trap that has a surface marker buoy attached to it.  If the buoy is not present, then it is considered abandoned, and ODA can remove it.

As soon as I got home I emailed my contact at the DF&W and sent him the GPS locations as well as the ID number.  I was told that ODA cannot remove these traps ourselves, but he will contact the owner and let him know he needs to remove them or face some fines.  Let’s hope a whale doesn’t have to pay the ultimate fine with its life in the meantime…

We will continue to monitor those traps and let you know when all of them are gone.  Stay tuned!

If you’d like to join the crew—to work on the deck or to SCUBA dive—please fill out our Crew Application and return it to . We’d love to work with you to remove ocean debris that’s harmful to wildlife and their habitat!

Seen any debris that needs to be removed? Please fill out our online debris reporting form.