New Ocean Defenders, a Reporter, and Thriving Wildlife Make for a Good Day for the Ocean

After having found a whole lot of abandoned lobsters traps last weekend, we had a boatload of volunteers show-up on a cloudy Sunday morning, August 28th.

Back to Shell Island

Despite the bad underwater visibility (UW vis) last weekend, we still removed four traps and saw about a dozen more that we had to leave behind due to that pesky three-foot vis.

Five divers and five deck hands made up the crew this time.  The divers were: Kim Cardenas, Richard Hoffman, Kendall Raine, Geoff Walsh, and Mike Wynd.  Helping out with all the deck duties were: Chris Bagon, Amy Raine, Abigail Sanford, Sue St. Sure, and Angus Yates. We were happy to welcome Richard, Chris, and Amy for the first time! 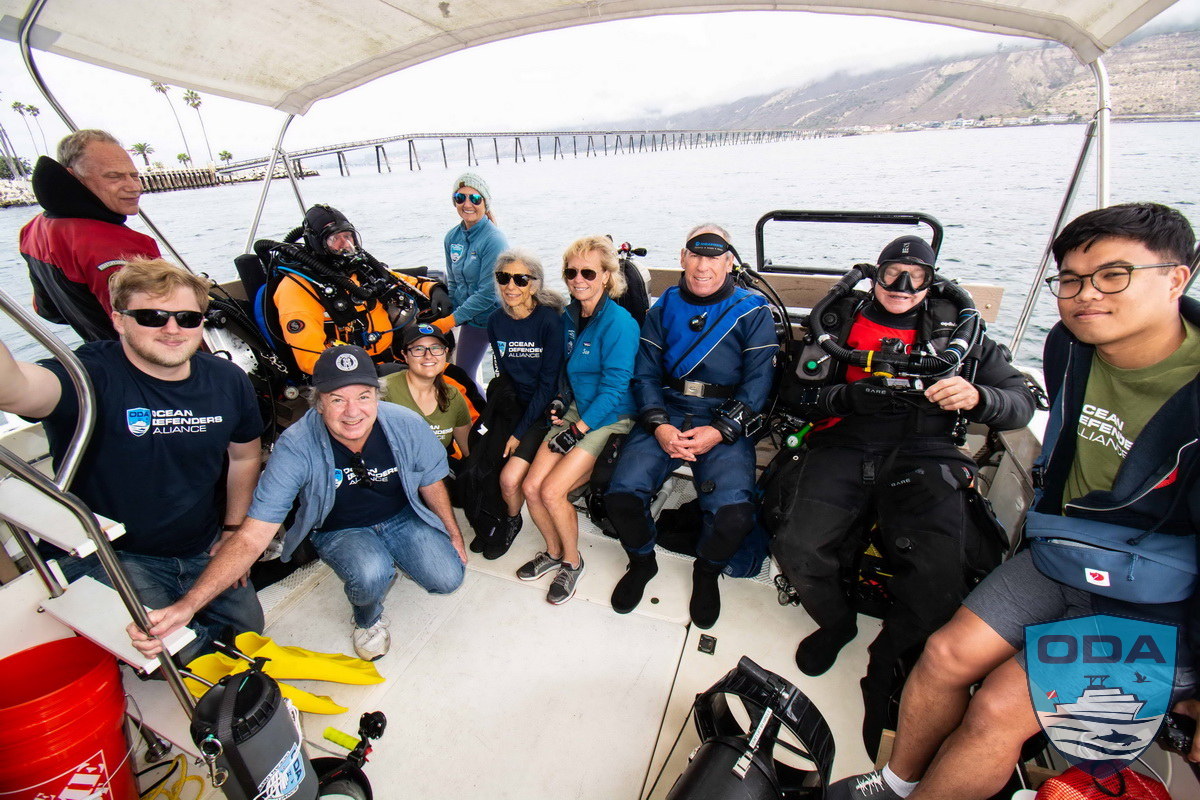 Also in attendance was Perry Van Houten, a reporter from the Ojai Valley News.  Perry came out with us a couple of times last year and wrote a great article about his experience with ODA.

We pulled out of our slip around 9:30am and headed north towards Rincon Island.  Some people refer to it as Shell Island, as Shell Oil used to run oil rigs there.  It’s about 16 miles from our boat slip in the Channel Islands Harbor.

The skies were heavily overcast, and the seas were predicted to be in the 2–4-foot range.  Not near as nice as it was last weekend, but doable.

Before we even left the harbor, we were treated to a fun site of roughly 100 California sea lions sunning themselves on a short stretch of sand inside the mouth of the harbor breakwall.  There were a few juvenile males jostling for dominance and fighting each other, but it was all just a ritual as they are too small at this phase of life to become the real deal – the “beach master!” 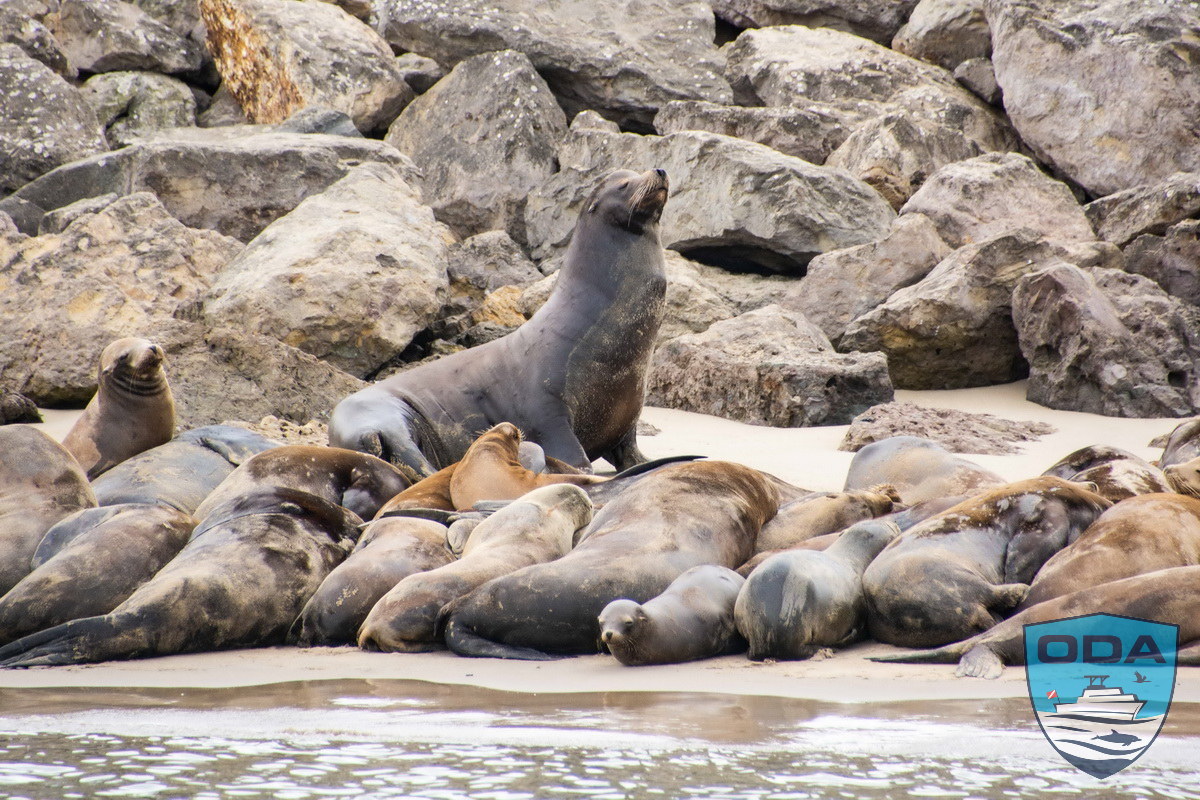 Even though the males reach sexual maturity around six years old, they don’t reach the "beach master” status until they are between nine and 12.  At that phase they can weigh up to 600 pounds!  We saw quite of few of them on the beach keeping a wary eye out to make sure none of the young ones got any ideas in their heads.  You can tell the mature ones from the juveniles by the bulb shape over their nose.

We got about 200 yards from that cool scene, only to see another rare sight. 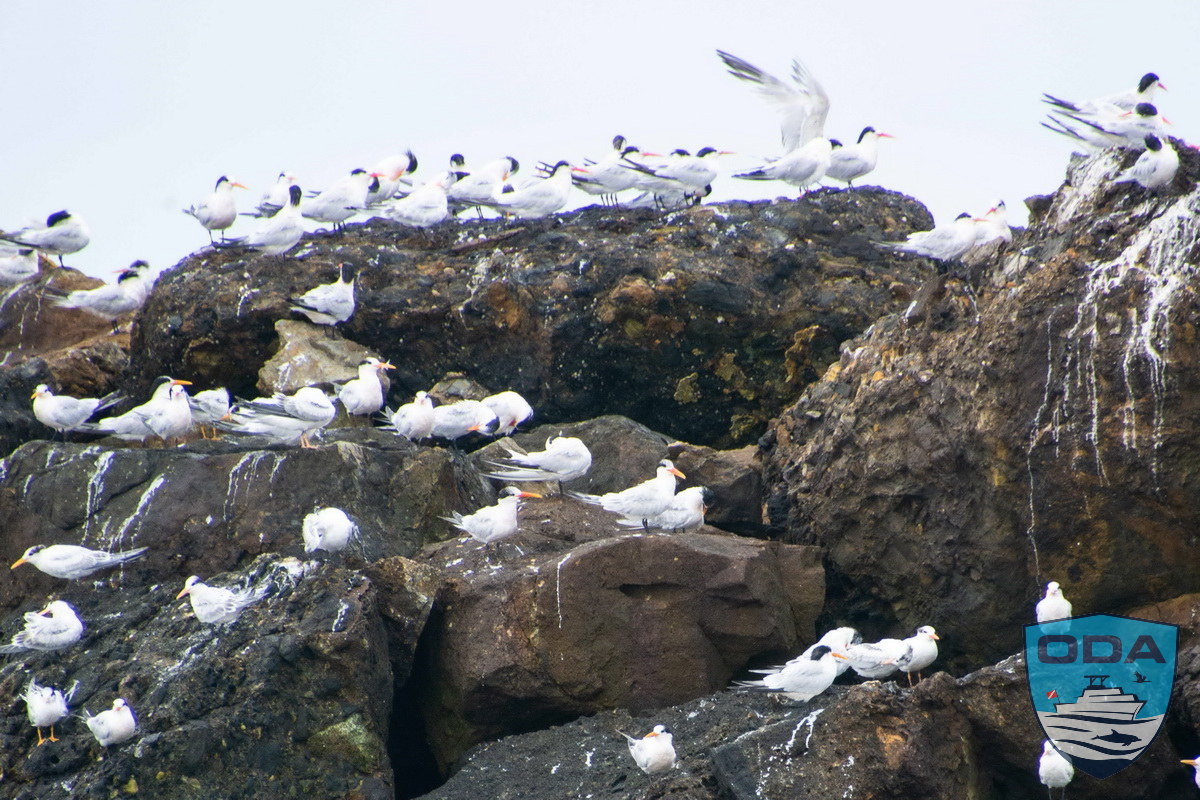 There were something like 1,000 terns on the breakwall.  One thousand!  I couldn’t tell exactly what kind of terns they were as I didn’t want to scare them off by having a big boat bear down on them.  But I think they were Caspian terns.  They are not endangered like the California least tern.  But still quite a thrill to see so many in one spot.

Next, we headed up the Ventura coast 16 miles to Rincon Island.  It took us an hour and 15 minutes to get there.  Once on the site, we decided to drop the divers off as close as we could to the area where we had seen all those traps before.

First in were Mike and Kendall.  They grabbed their scooters and headed for the island.  Geoff and Richard were right behind them and dropped down in the same spot. 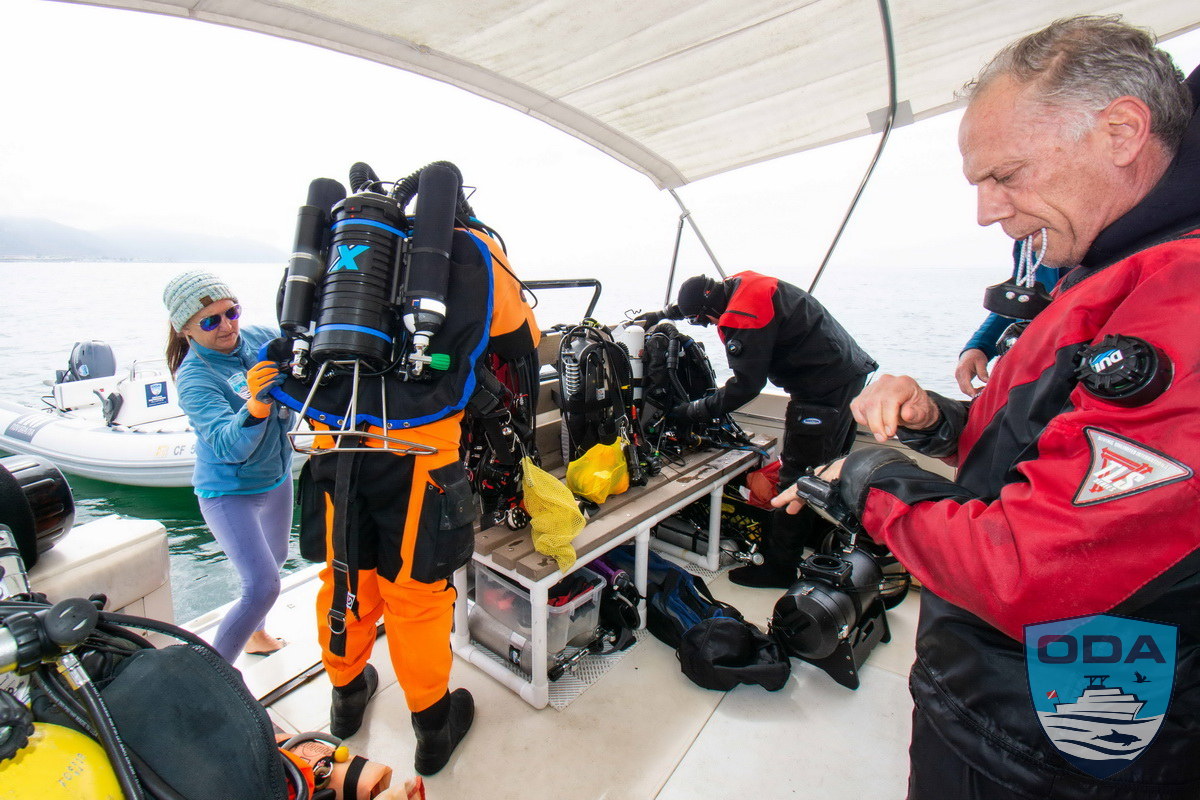 Within less than five minutes we saw Mike come up to the surface, with Kendall doing the same shortly thereafter.  They slowly made their way back to us on the boat.  Once they climbed up the dive ladder, we heard what had happened.

As they descended, they lost sight of each other immediately.  The vis was worse than last weekend, at about one foot!  Mike couldn’t even see the tip of his scooter.  He tried to make some headway, but then bumped into something.  When he tried to move around it, he discovered that he had wedged himself under a pier piling that was at an angle.  After a couple seconds of trying to figure out how he was going to extract himself, he calmly backed out of the wedge.

He could hear the motor from Kendall’s scooter but could not see him!  So, Mike ascended to the surface and Kendall did the same.  At that point they both decided to call the dive off.  No way to dive safely in those kind of conditions… 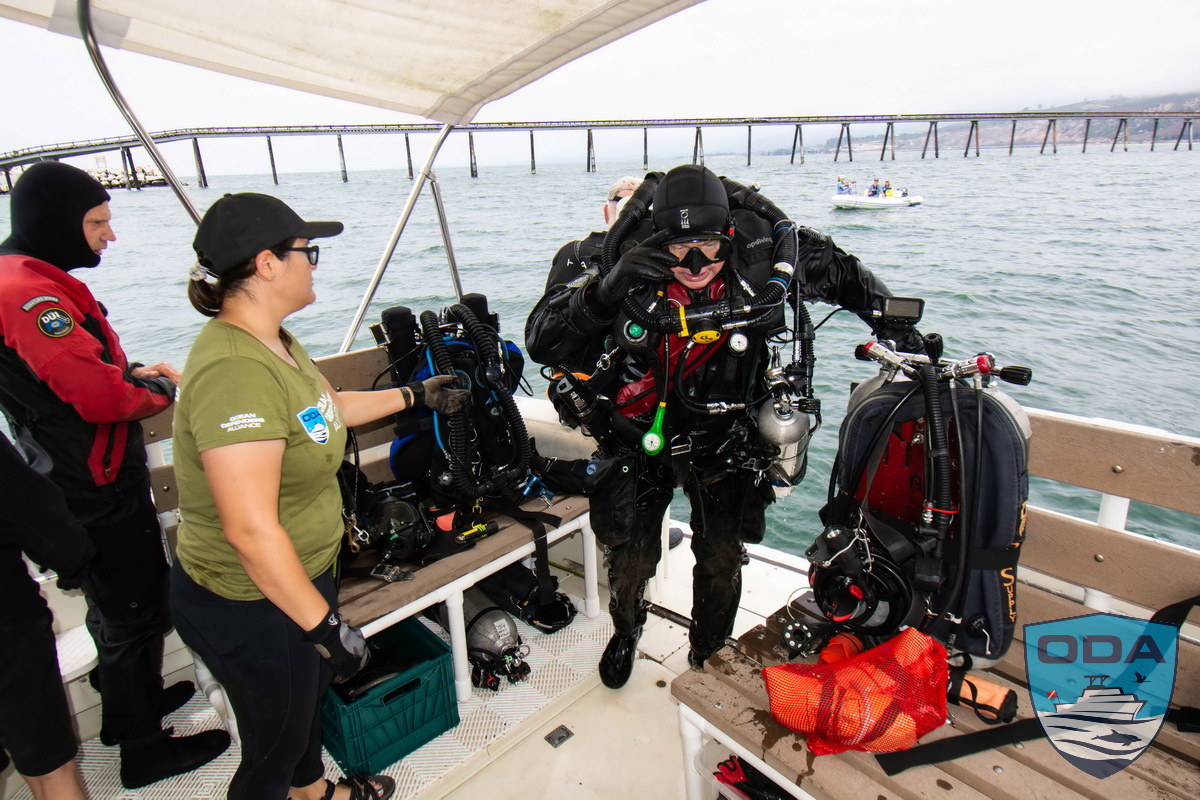 We fully expected Geoff and Richard to do the same, but they had other ideas.  We didn’t see hide nor hare of them for about 40 minutes.  Then we saw two lift bags pop up about 200 yards away.  Sue, Abigail, and Perry motored the RIB over to the bags and started to drag them over to us on our boat Mr. Barker’s LegaSea.

Because we saw two lift bags in close proximity to each other we thought that a trap would have been attached.  But it turned out to be a really heavy weight bar.  This is the bar the gets attached to the bottom of a trap and assures that the trap sits on the sea floor in the proper orientation, with the trap door on the top of the trap to make sure that as the metal parts deteriorate that the door breaks away first and the animals can get out (which they still often don’t). 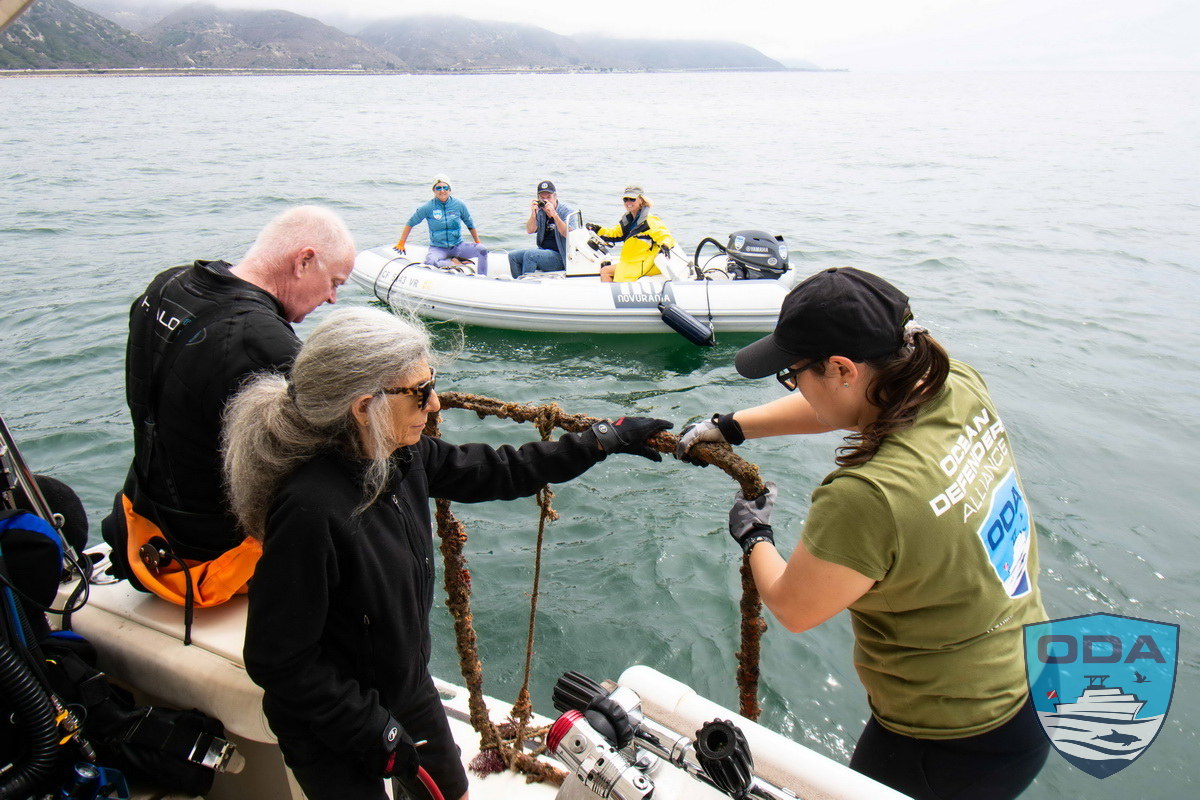 Geoff and Richard found their way back to the boat and said they could hardly see anything.  The only reason they found that bar was because they ran into it.

Here you can see Abigail holding a piece of a trap that is where the bait is located. 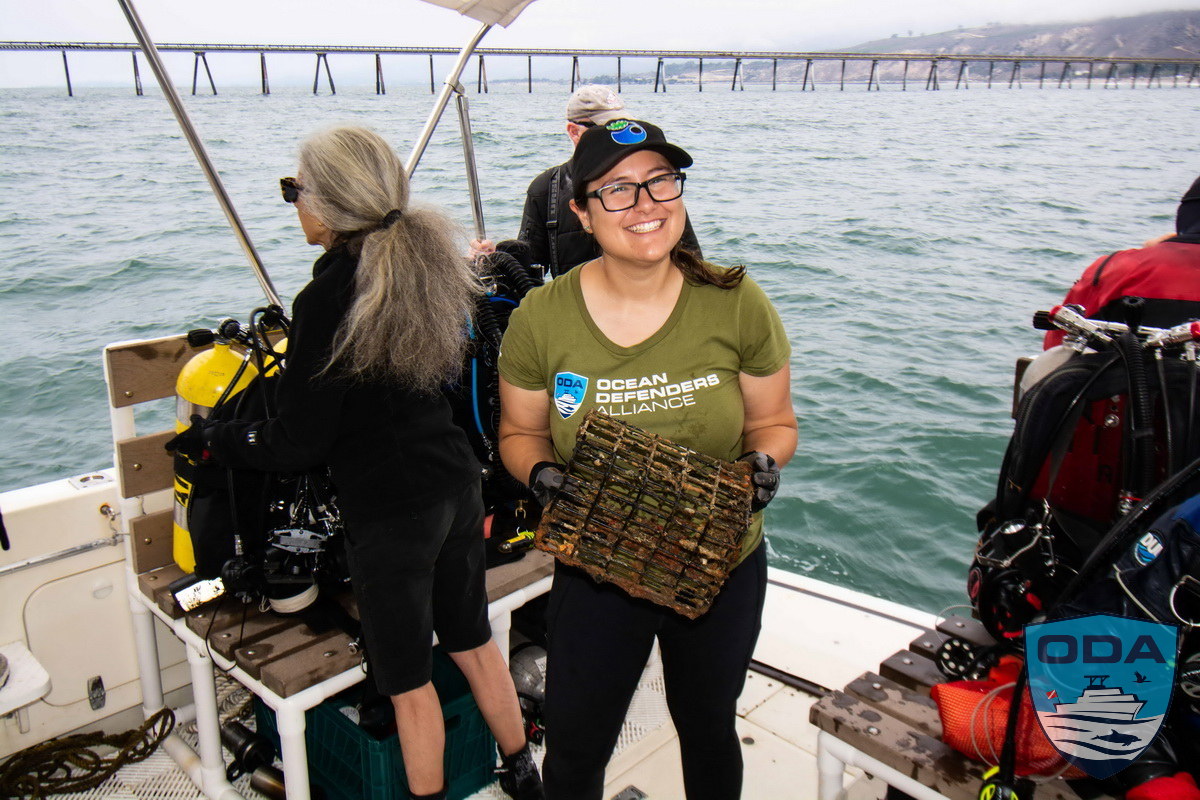 Needless to say, that was the end of our diving.  As we headed back down the coast, the seas were getting bigger and the winds were picking up. 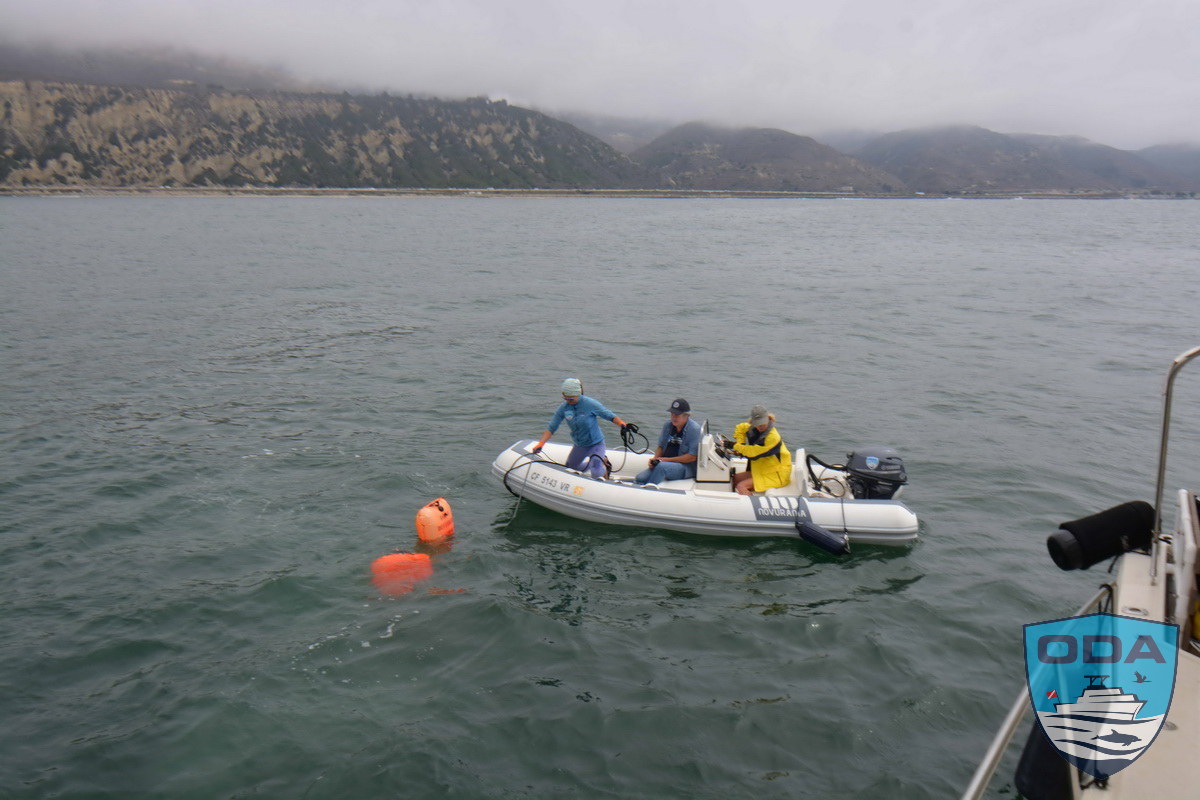 You can see the low-hanging clouds almost touching the cliffs. However, the skies finally cleared up around noon, and we had a nice view of the coastline.

Even though it was not one of our most productive days on the water, a few good things happened for the ocean:  We still got some marine debris out, including about 70 feet of trap lines; we hope locals will see Perry’s report in the Ojai Valley News; and we inaugurated three new crewmembers!

One thing you can count on, we’ll be back!

Check out our haul on the previous expedition to Rincon Island here.