Ocean Debris: Everything Including the Kitchen Sink! 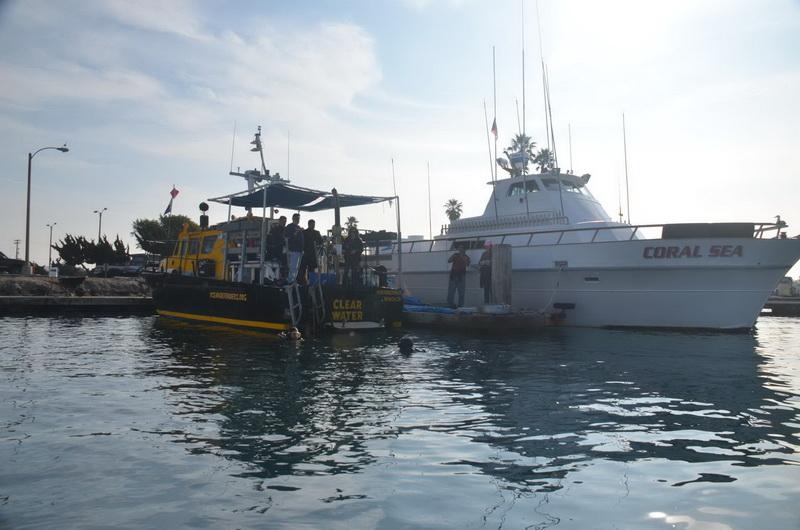 First, from our crew to yours: We hope you are having a good start to the New Year!

ODA has begun well, and plan to make 2014 another record-breaking year.

We started out the year with a new tactic.

I've been developing a great working relationship with the folks at the Channel Islands Harbor Patrol.

Sargent Tom Bazemore is a huge fan of ODA's, and has been championing us to his compatriots at the Harbor Patrol. Jack Peveler is the Harbor Master, and between the two of them I've been getting good advice on whom to talk to about ODA's Ventura County coastal work. 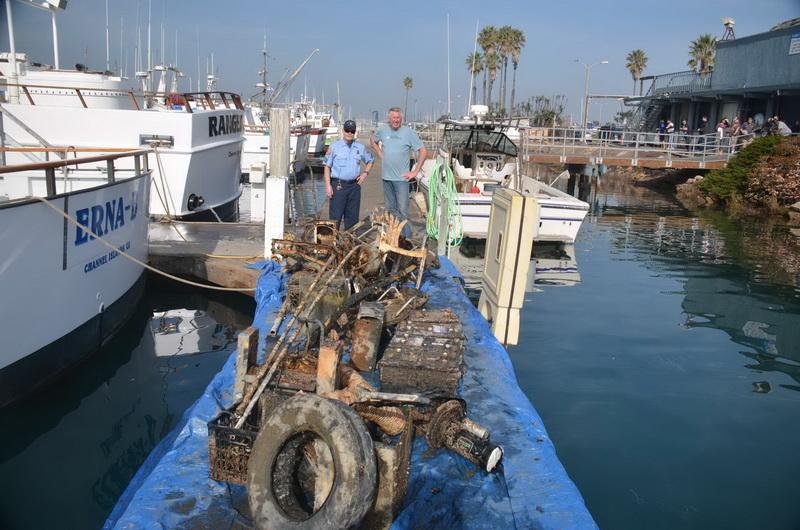 During one of the many talks I've had with Tom and Jack, they asked me if I would take some of our divers and look underneath some of the boat slips that are right outside their office.

This is an area where the "day boats" reside.  These are the boats that take recreational anglers out to Anacapa, Santa Cruz, Santa Rosa, and San Miguel Islands to hunt for fish for the day. These are large boats, anywhere from 65- to 100-feet long, and can hold up to 50 people.

ODA Volunteers Kevin Augarten and Jeff Larson took a quick dive to look under two of the boat slips in December and saw that there was a lot of junk under those slips.  So, I organized a cleanup for January 4th.

Rex Levi volunteered to captain our flagship vessel the Clearwater, while Kevin Augarten, Jeff Larson, Trevor Fulks, and I put our tanks and masks on and jumped in.  We had a great topside crew to haul up what we found. Lisa Davis, Peter Fulks (video), Jim Lieber (still photographer), Caleb Padilla, Herman Padilla, Christy Parker, Leila Parker, and Tim Pearson rounded out the day's awesome crew. 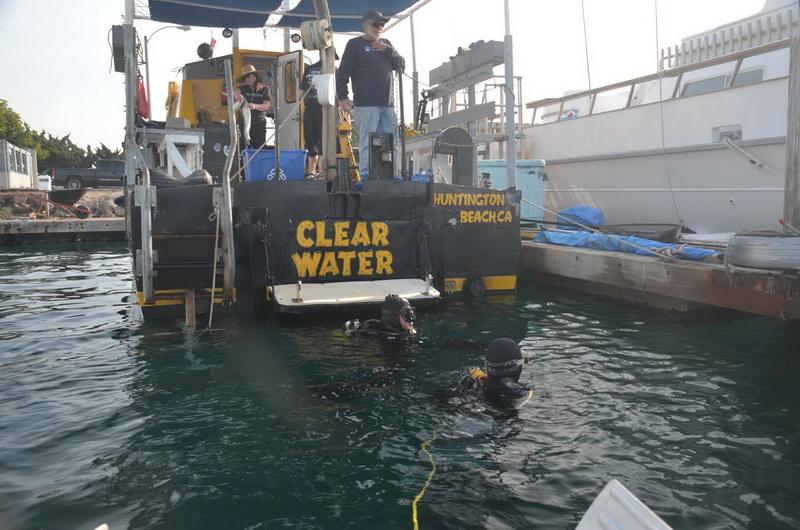 Trevor and I dropped down first so he could shoot some video of the area before we started removing anything, as the silt would reduce the visibility and render the camera useless.  The visibility was excellent for a marina, at something like 20 feet.  At first it looked like a nice underwater habitat, there was a nice sandy bottom with 4 inch tall tube anemones standing like beautiful flowers, their orange or white tentacles dancing with the ebb and flow of the waters.  Here and there you'd see crabs and fish darting around.

Then we made our way to just under the dock walkway.  At first I saw a pier piling and there was a handcart…standing upright, like someone was about to grab it and load some stuff onto it.  …a very odd sight.  On the pier piling were a couple of absolutely huge scallops, about 10 inches in diameter!

From there we kept moving forward and it got downright ugly.  First, we found some electrical fans, then a microwave oven, another hand cart, two sets of wheels and axles from a wagon, even (literally!) a kitchen sink…then we came upon something I was hoping we wouldn't see: batteries.

Charged up for destruction 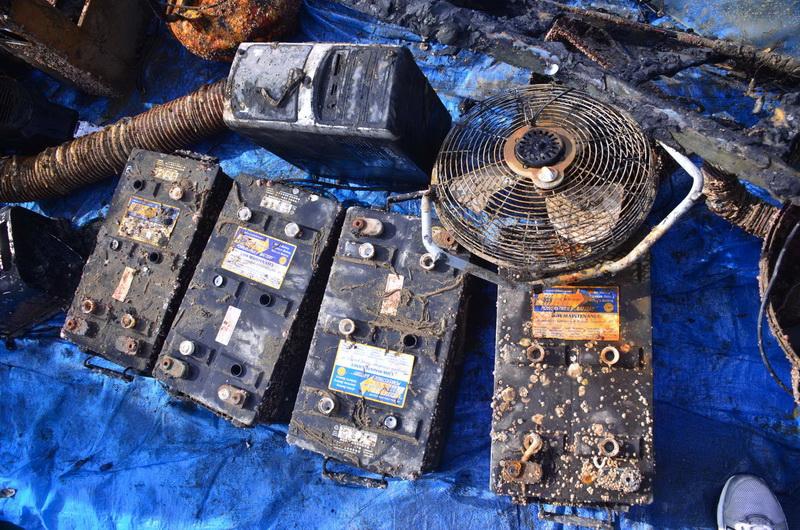 There were four of them stacked right next to each other.  These are NOT car batteries but the ones used for very large engines.  They are called deep cycle batteries and weigh about 100 pounds each.  They are filled with lead and acid, and are seriously hazardous waste.

Another disturbing aspect of having all those batteries in the water is that there is a bait barge 200 feet away from the ones we found.  Then another 100 feet from there is a netted pen that is being used to raise white sea bass.  Those bass will be released when they are big enough to make it on their own.  Those same bass will be on the end of the fishing line of some unsuspecting fishermen. And then on the menu on some unsuspecting diners. "Yes, waiter, I'd like some white sea bass."  "Okay sir, but you might want to take an antacid pill with your order." 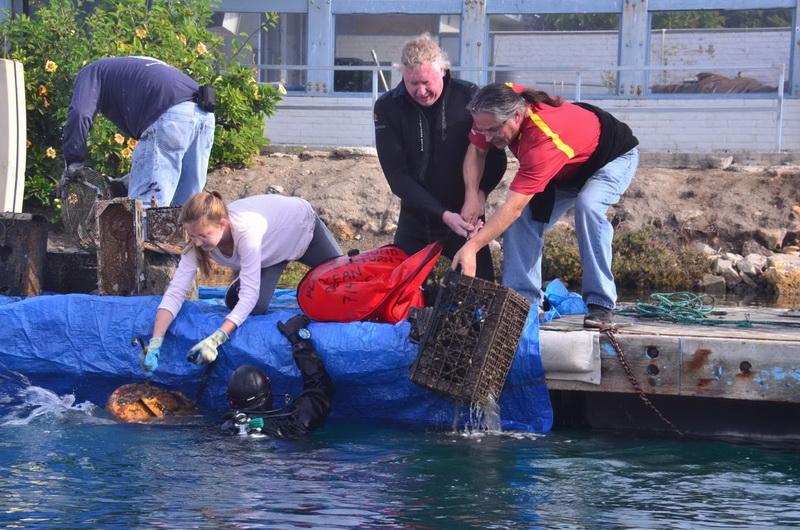 After that discovery, Trevor and I quickly got to work.  Kevin and Jeff joined us and we all started attaching lines to whatever we felt could be hauled up.  On the docks our crewmembers were dropping one end of a line down to us, we'd attach our debris and they would haul it to the surface.

That is where the real fun began! Imagine trying to haul a one hundred pound battery up on a single line.  Then once you wrestle it to the surface, you have to maneuver it out far enough to clear the underside of the dock.  This wouldn't be easy for a 300 pound football player let alone our dedicated teenage volunteers.

We were happy to have these young people help us out with a cleanup.  And they stepped right up and volunteered with smiles on their faces.  Caleb Padilla (8th grade) and Leila Parker (6th grade) both love the oceans and want to help ODA do our job of helping to restore marine ecosystems. They did a fantastic job!  Thank you to Herman Padilla and Christy Parker for bringing your kids with you for this cleanup party! 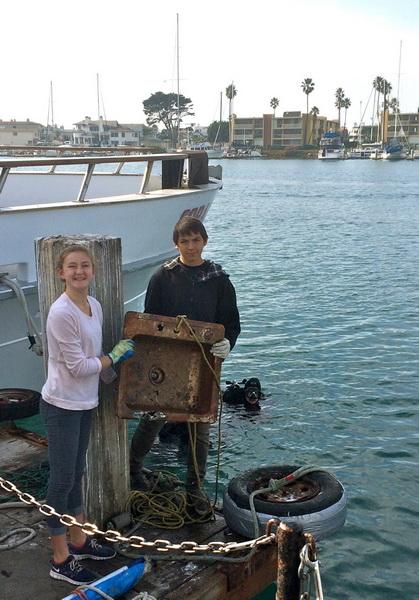 We removed as much debris as we could, and then hauled all the stuff to a waste disposal bin that the Harbor Patrol let us use.  They took the batteries to be properly taken care of at a hazardous waste site.

In all, we estimate this mess of junk had to weigh at least 1,000 lbs.  The site we worked in was about 40 feet long by 80 wide.  We removed about half of what was down there.  There are a total of 16 slips here that we plan on working on over the course of the next year or so, on this day we just covered one.  Operation Deep Sweep will continue in the Channel Islands later this year, but until the weather settles down we have a great place to do good work for the ocean in a relatively protected settling-and wonderful local support to help us as well!

Just before Kevin and Jeff surfaced from their dive, they found many more batteries. 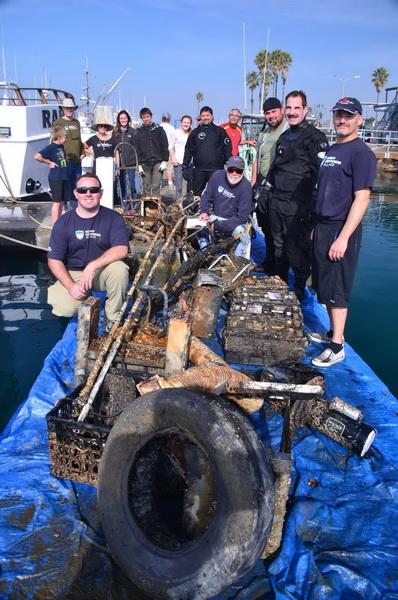 I promise you we WILL return soon!

We are looking forward to a productive 2014 with you by our side.