UPDATE: Watch this 3-minute video to experience the lobster release and understand the reasons for doing it!

Sunday July 11th started out like most of our weekends for ODA volunteers.  We had five divers and three deck hands all set to show up early and head 25 miles down the coast from Oxnard to a place called Countyline Beach, in Malibu.

Rob Broesemle, one of our most recent volunteers, was going to meet us down there with his boat and show us where he had previously located ghost fishing gear and other marine debris.

Darrel Lee was our deckhand, and Kim Cardenas, Al Laubenstein, and Geoff Walsh were going to be three of the divers. However, Kim had to cancel at the last minute.  Then as we were just pulling out of our slip in Oxnard, I got a phone call from Rob.  He said that there was a VERY large shark at countyline and the Coast Guard had a helicopter in the air warning everyone to keep out of the water…

I thought about it for about five seconds, and then we switched to a Plan B.  Even though that shark had been spotted for days, and wasn’t harming anyone, we all know they are attracted to things splashing in the water.  This usually indicates to them that some animal (lunch) is in distress.

When our divers are working on removing anything from the water, we make splashing sounds.  Exactly what a hungry shark seeks out.

Plan B in Action

Our Plan B was to head to a place along the coast of Oxnard, just outside the Channel Islands Harbor, where we’ve removed ghost gear in years past.  We hadn’t been there for five years, so we decided to give it a try. 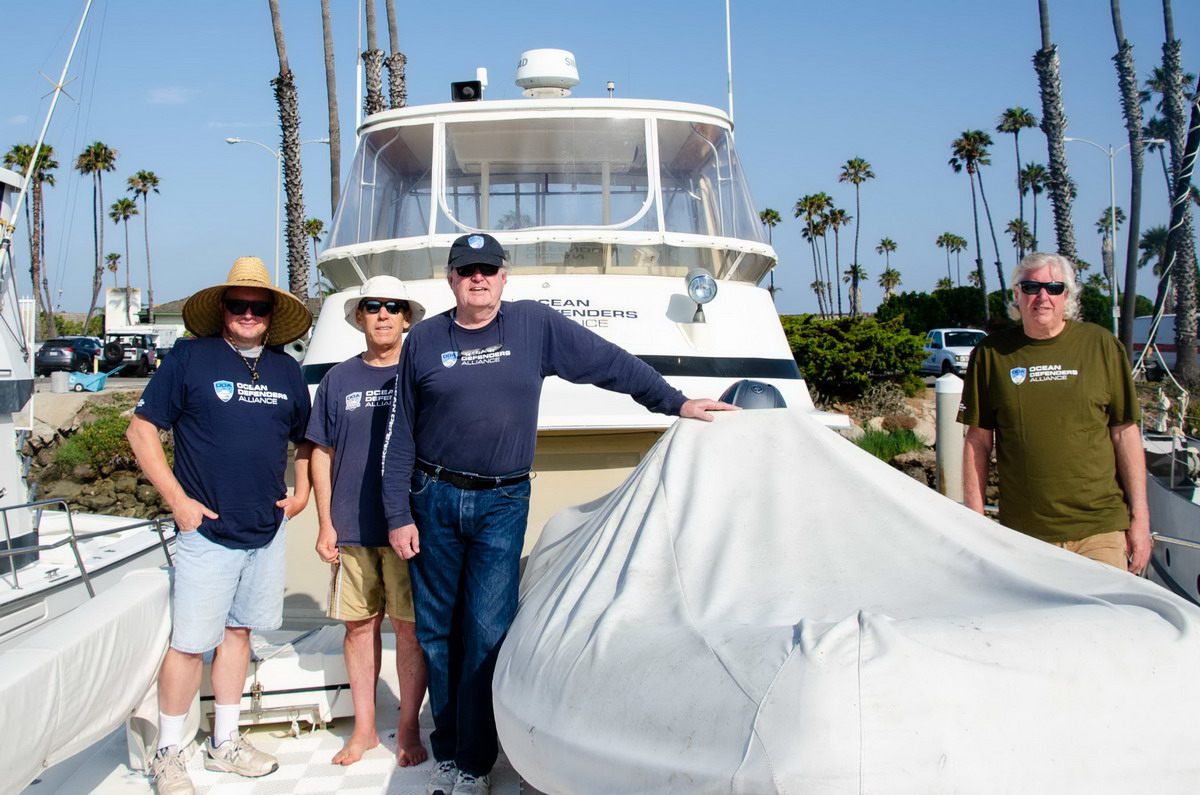 I phoned Rob and told him about the change in plans and he said he and his friends we meet us there in an hour.  He had two other people onboard his small boat – his dive partner and someone who would handle the boat while they were diving.

As we pulled up to the dive site, the waves weren’t very big, but it was quite choppy with a strong wind blowing in from the northwest.  Al and Geoff’s plan was to grab their underwater scooters and cover a lot of underwater terrain to hunt for abandoned lobster traps. 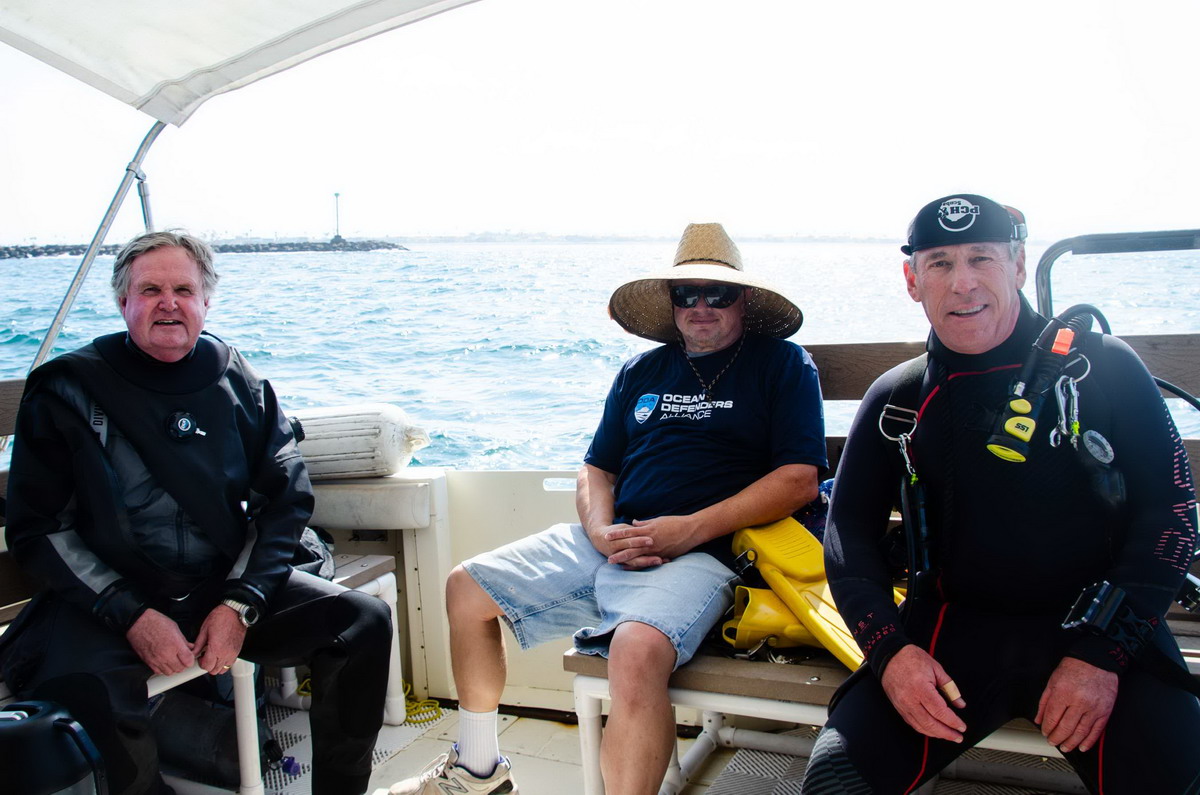 They jumped in the water around 10:30, while Darrel and I followed them around in the LegaSea.  Although Darrel and I quickly lost sight of them because of the choppy waters, we had a rough idea where they were heading and moved in that direction at a slow enough speed to make sure that we didn’t overtake them.

We didn’t see them for the next 50 minutes.  But then we saw Al surface. 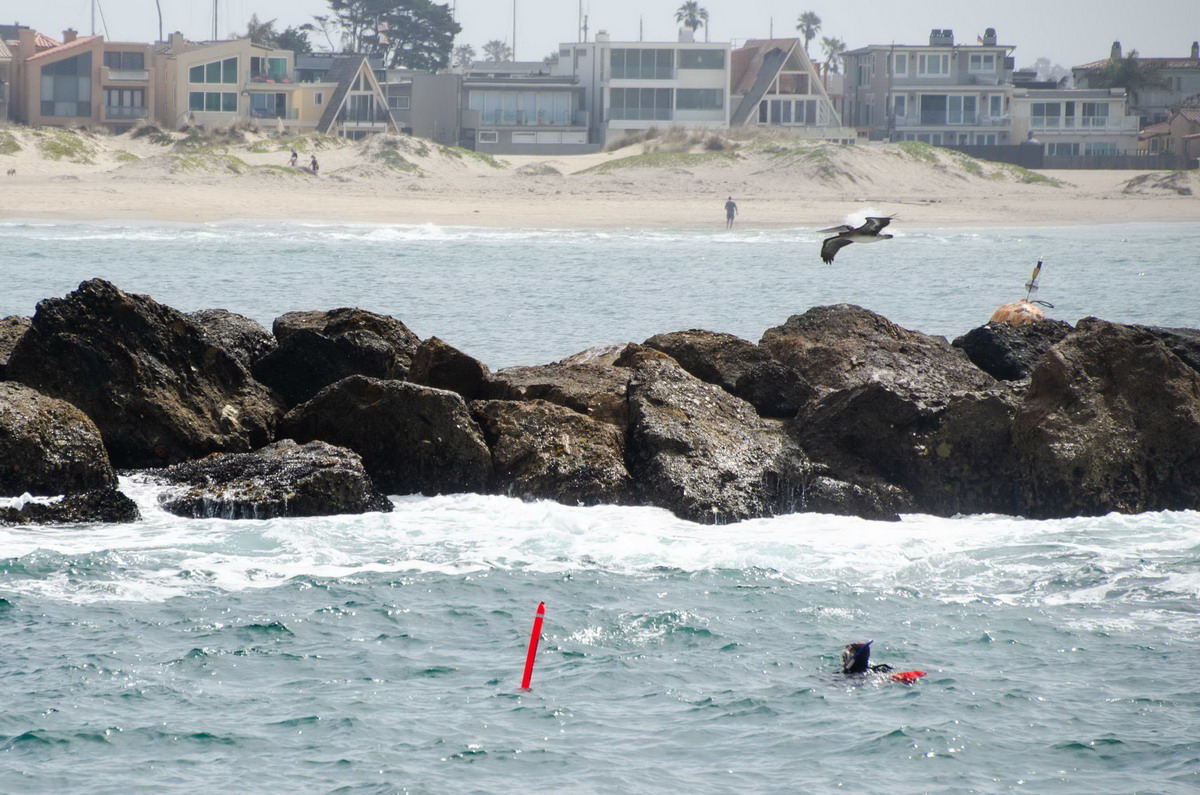 He was about 100 feet from us on the LegaSea.  Within two minutes we saw an orange SMB (Surface Marker Buoy) pop up 20 feet away from Al.  Geoff had located two abandoned lobster traps, and had attached that SMB to it, so we could head back to it after the two divers climbed back aboard our boat.

Once they were on the back deck they were about jumping out of their wetsuits with excitement.  Geoff said that there were at least 30 lobsters in two traps! 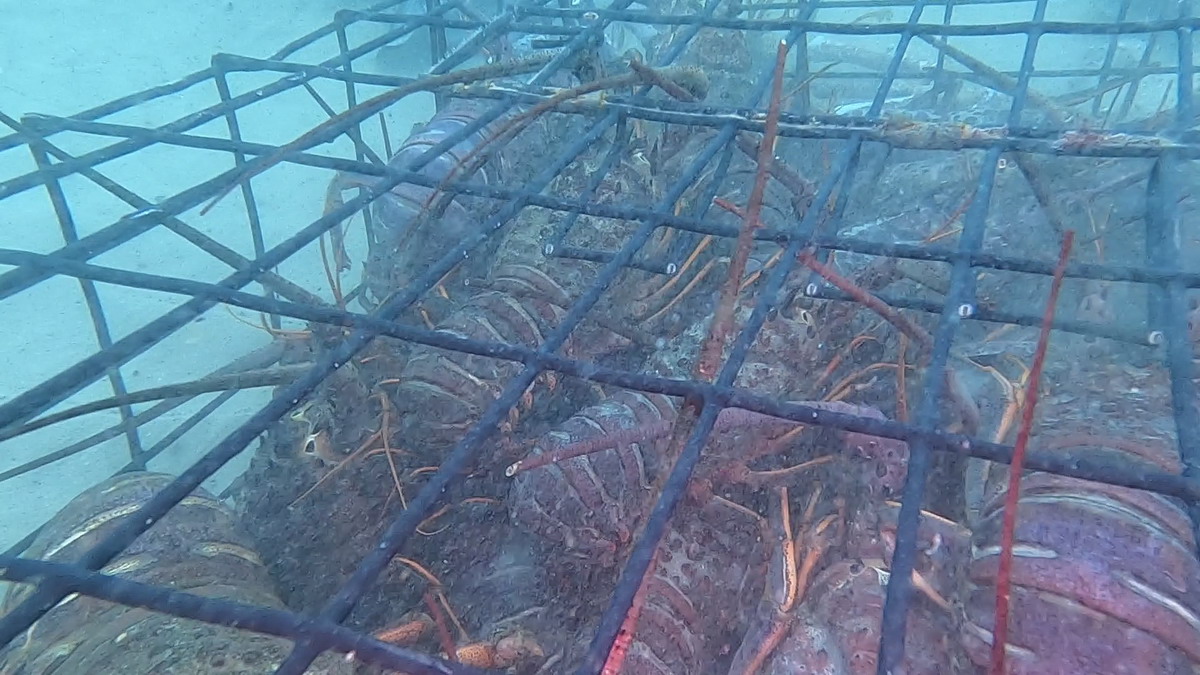 Unfortunately, the traps were too buried in sand to be able to pull them out, so we decided the only thing we could do was to cut the traps open and let the lobsters loose to live another day.

I quickly called Rob on the phone to see if he could help us.  Nope, his dad was being rushed to the hospital and he had to head back to shore to be with him…  No worries Rob, and we all hope things turn out best for your father, John Broesemle.

Then, to make matters worse, Al’s dry suit had flooded, and he was soaked to the bone.  He was purple from the cold.  So, he couldn’t do anymore diving.  Now we were down to only Geoff being able to dive…  But we just had to get those lobsters out of there!

Super Woman to the rescue!

I called Kim to see if there was any way she could save the day and grab her dive gear?  We needed a second diver so we could document our work releasing the animals. She didn’t hesitate to say yes, and within an hour we picked her up at our boat slip. 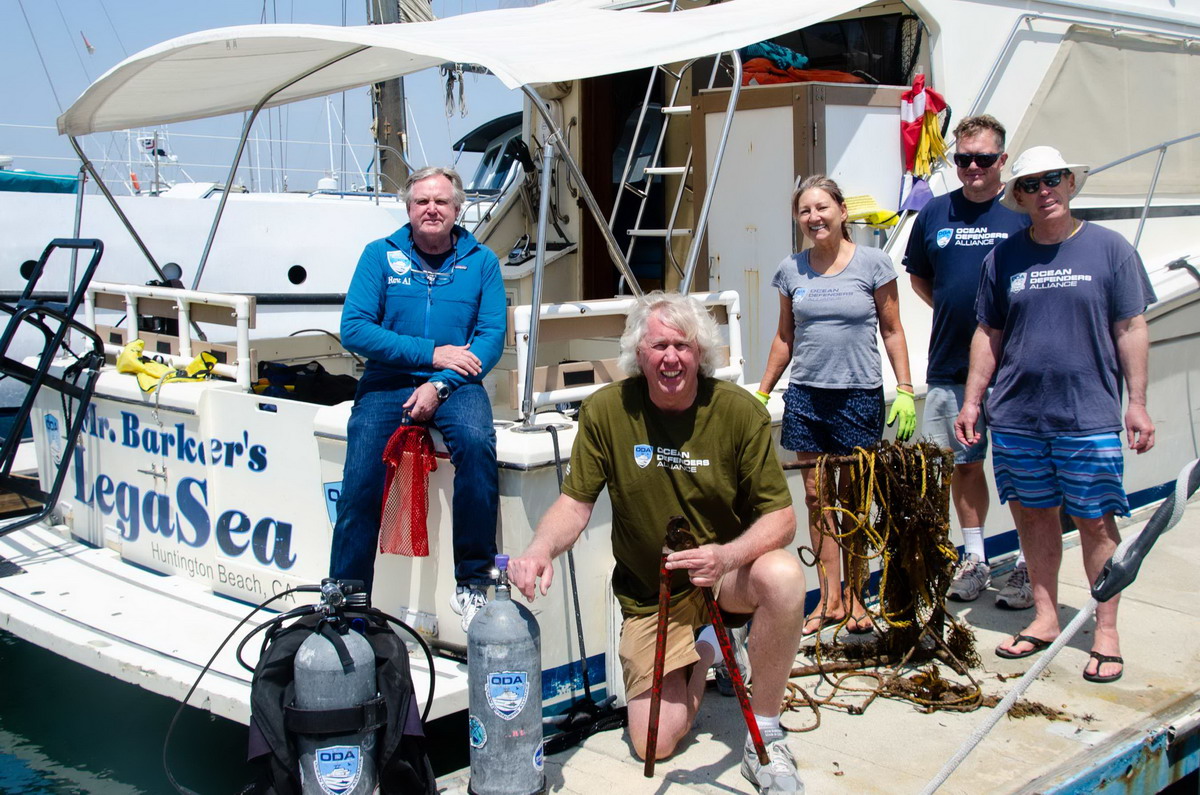 Around one o’clock Kim and Geoff jumped in and headed to those traps.  By now the afternoon seas were starting to get bigger and less predictable.  Because we were working so close to some rocks, I didn’t want to drop the anchor for fear of it not holding in the sandy bottom and decided to keep the boat running while they worked on cutting the tops off the traps.

Cutting the traps turned out to be easier said than done, as the surging water was throwing the divers back and forth while they tried to manipulate the cutting tool in place long enough to cut through the wire mesh. 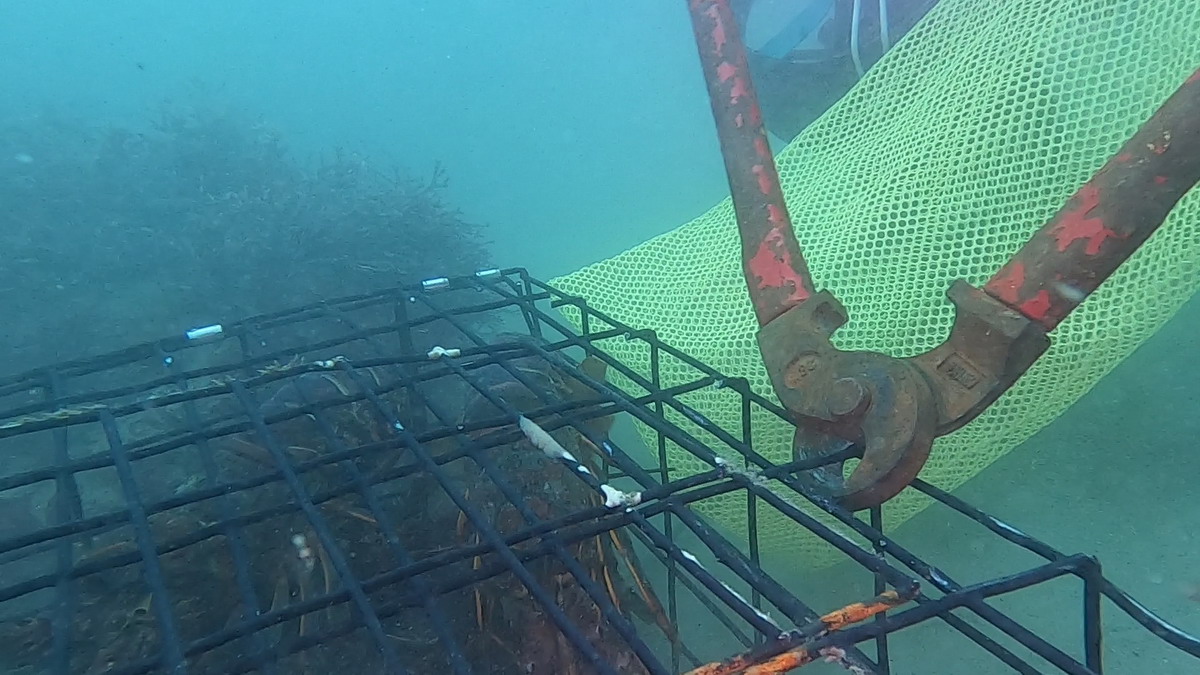 We estimate between 30 to 40 lobsters, one sheep crab and several small rock crabs. 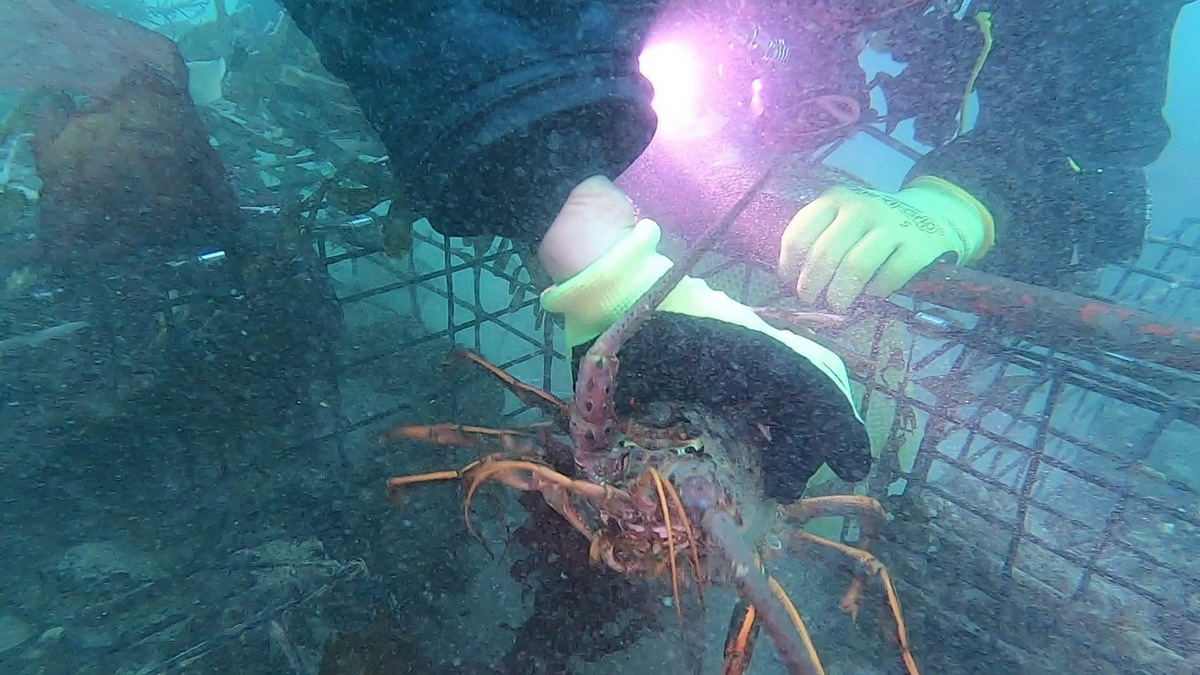 The animals needed a little gentle assistance getting to freedom!

Luckily for us, Geoff had brought his UW (underwater) camera with him, and we'll all get to see how many animals were stuck in those two traps.

We'll release a short video within the next couple days, but in the meantime enjoy these pictures.  All these underwater images are ones I pulled out of the video clips that Geoff and Kim took.

This is an especially joyful shot of this lobster taking a first glimpse of his newfound freedom: 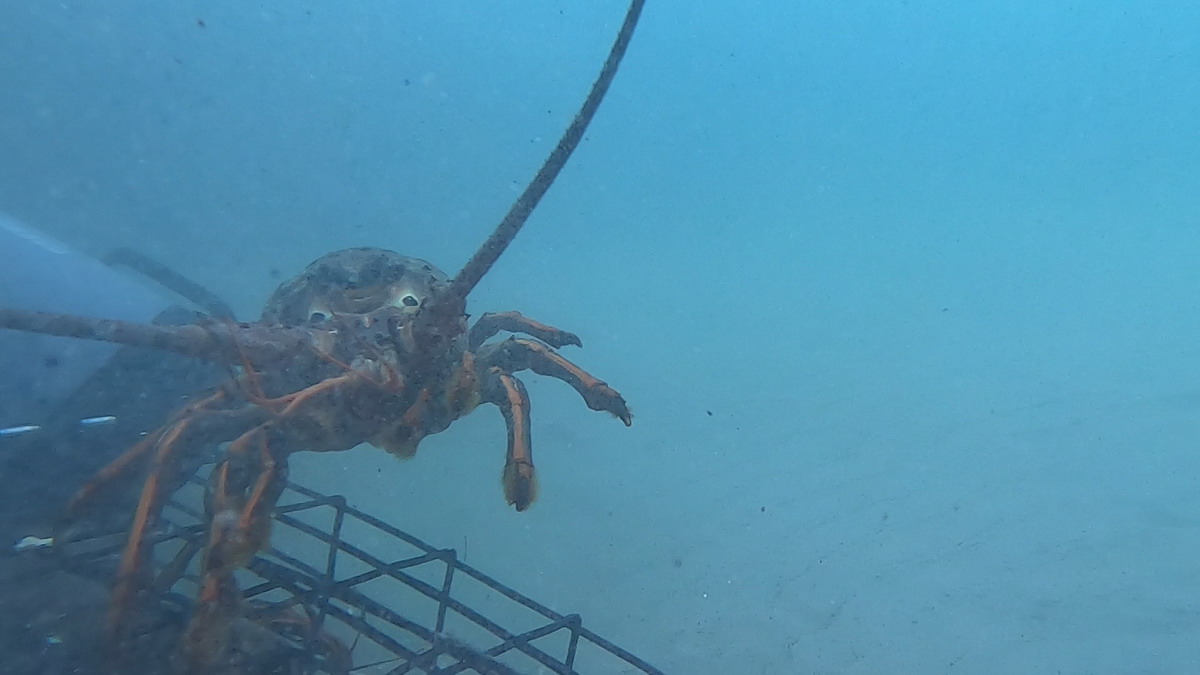 It was quite the undertaking, and it took us over six hours before we pulled the boat back in the slip.

All those animals were destined to die in there.  If not by other predators, they would have died from cannibalism.  When lobsters are confined in small spaces, they will eat the smaller ones to keep themselves alive.  We could already see that happening as many of the animals had missing limbs.  Now that they are back in the wild, they can still go on with their lives despite missing a few appendages…

Here's another lobster swimming away as fast as possible! 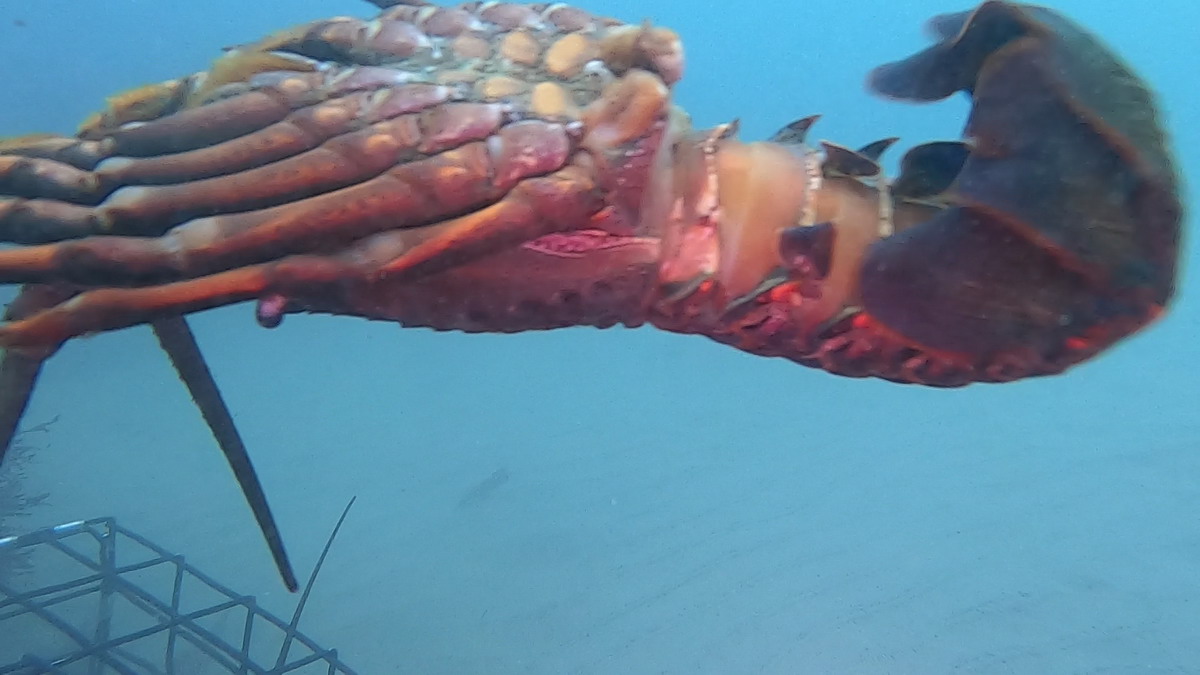 But all those lobsters are now free, the trap cannot trap animals anymore, AND because the majority of the lobsters were bigger than we normally see, we’re confident that they will add greatly to the release of hundreds of thousands of baby lobsters.

Wouldn’t you like to be part of saving marine wildlife? You can do it from home by supporting our cause or join us on the boat!