Having just moved the LegaSea up to the Channel Islands Harbor last weekend, several of us took advantage of some great weather, and headed out to Santa Cruz Island on Sunday, June 27th. 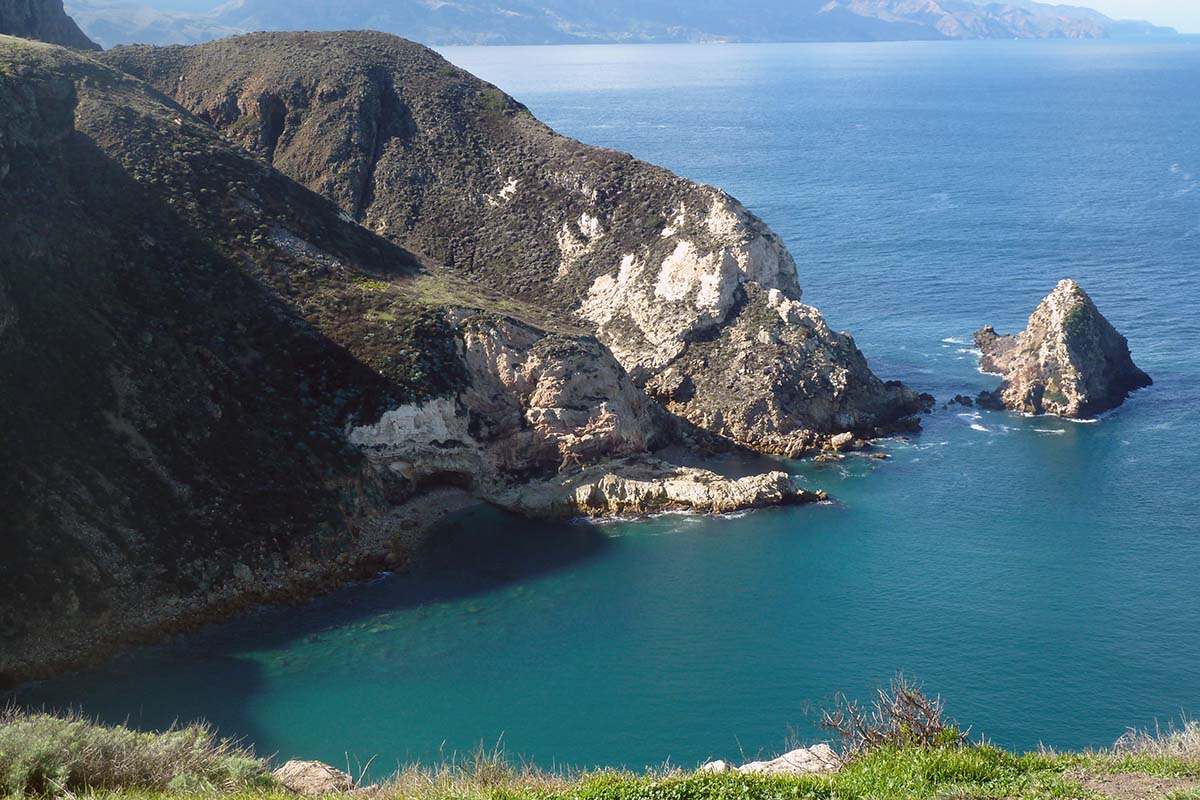 Longtime crewmembers Kim Cardenas, Rex Levi, Dave Merrill, and I left our slip earlier than we normally do, in order to get a jump on the good seas and avoid getting hammered on our way home in the late afternoon.  Turned out to be good thinking.

The weather patterns are slightly different up here off Ventura County (as opposed to off the more southern Orange County), and the winds predictably pick up in the afternoon.  This usually makes for a miserable return trip, with bigger waves and stronger winds giving the boat a pounding on our way back home.

We had received a report that someone saw three abandoned lobster traps around Santa Cruz. With a whale entanglement still fresh in our minds, we wanted to get that hazardous ghost gear of harm’s way before one more whale becomes entangled.

Speaking of the poor whale…

The NOAA Whale Entanglement Team (WET) never did get that humpback whale un-entangled.  It was last seen in the waters off Laguna Beach, CA on Wednesday, June 23rd.  No known sightings since then.  NOT good…

Back to the traps

The report gave us the GPS numbers for one of the traps, so we headed there first.  Those numbers led us right to the spot of the trap, which was on the north side of the island.  When we got there the seas were nice and flat, and Captain Dave maneuvered the boat so close to the trap’s buoy that Rex was able to snag it with our boat hook and pull it up to Kim and me. 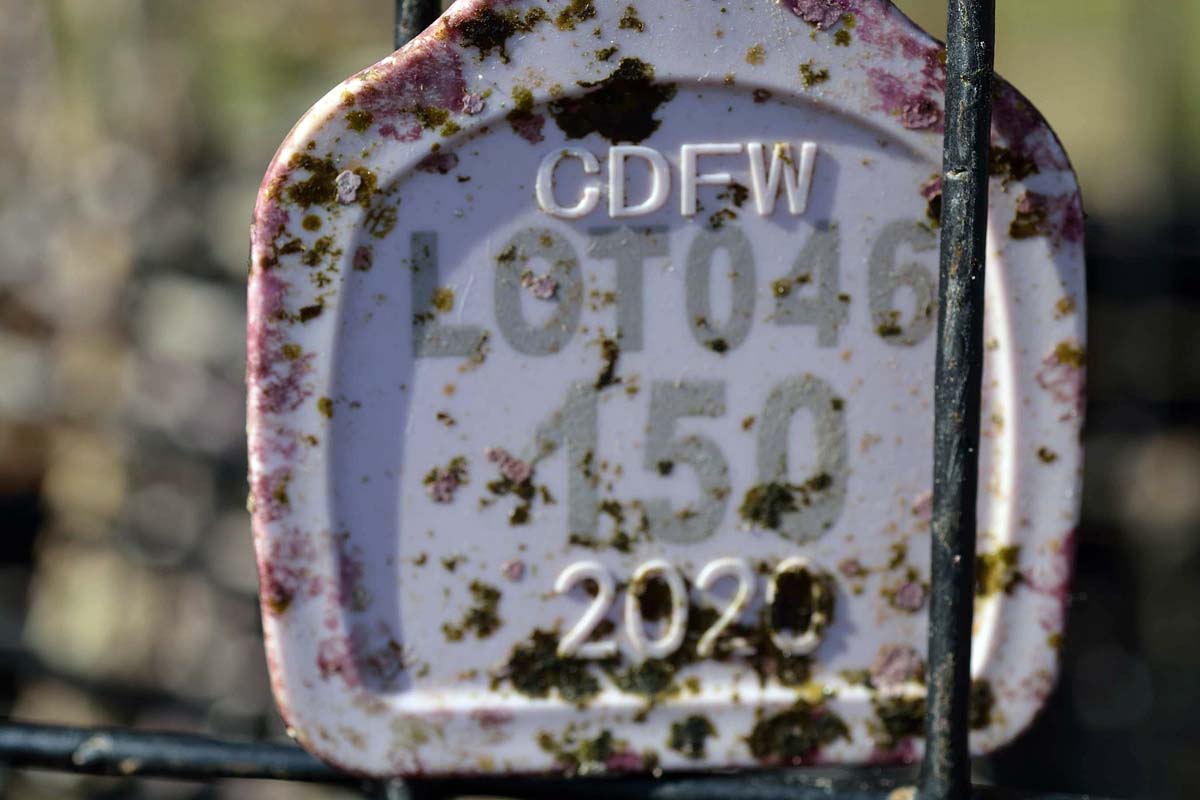 We tried pulling the trap up by hand, but it felt like it was stuck in the sand.  So, we wrapped the trap line around our windlass (i.e., turn crank), and let the motor do the heavy lifting.  Sure enough, within a couple of minutes we had the trap pulled up close enough to the bow that we were able to attach the davit line to it and haul it aboard the boat that way. 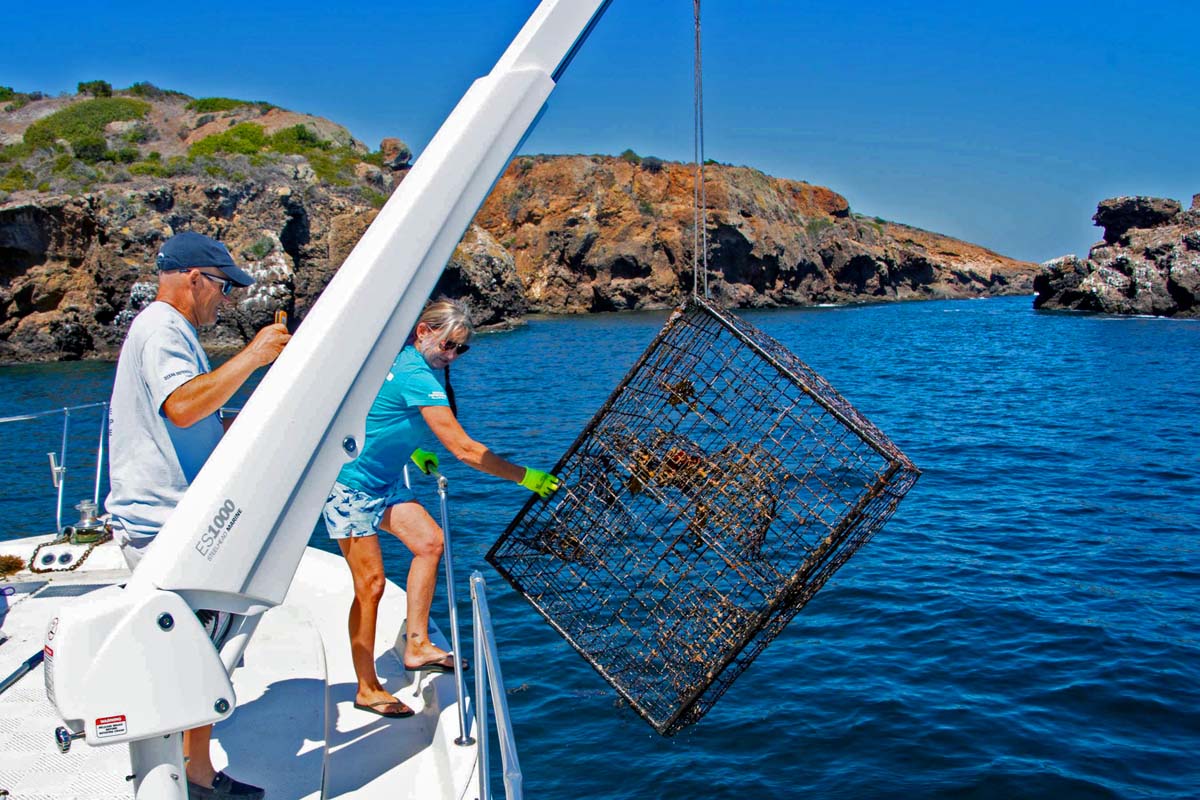 The trap was in relatively good condition, and the tag that identifies its owner revealed that the trap was from 2020.  This was one of those really big traps, about 5 feet by 4 feet by 1.5 feet.  Because we used the boats mechanical features, we hardly broke a sweat getting it on the front deck.  SWEET!

We then saw another trap buoy that looked like it was newer and might have a trap attached to it as well.  It was about 100 yards away.

When we got close enough to the buoy, I didn’t see any markings on it like the other one, that would have revealed whether it was a lobster trap or not.  Being suspicious, I decided to pull it up and see what it was.

When we got it up to the boat deck and out of the water, we could see it was a lobster trap.  We then hooked it up to the davit line and started hauling it aboard.  As it got closer, I saw a couple of lobsters in it.  Kim soon saw that there were more in it.

Well now, they wouldn’t be in there for long!

As soon as we got it aboard, Captain Dave backed the boat up a safe distance from the shoreline and we got the lobsters out of there one by one.  As we posed for pictures, we could see one of them was a female.  How could we tell?  Just look at all those bright orange eggs! 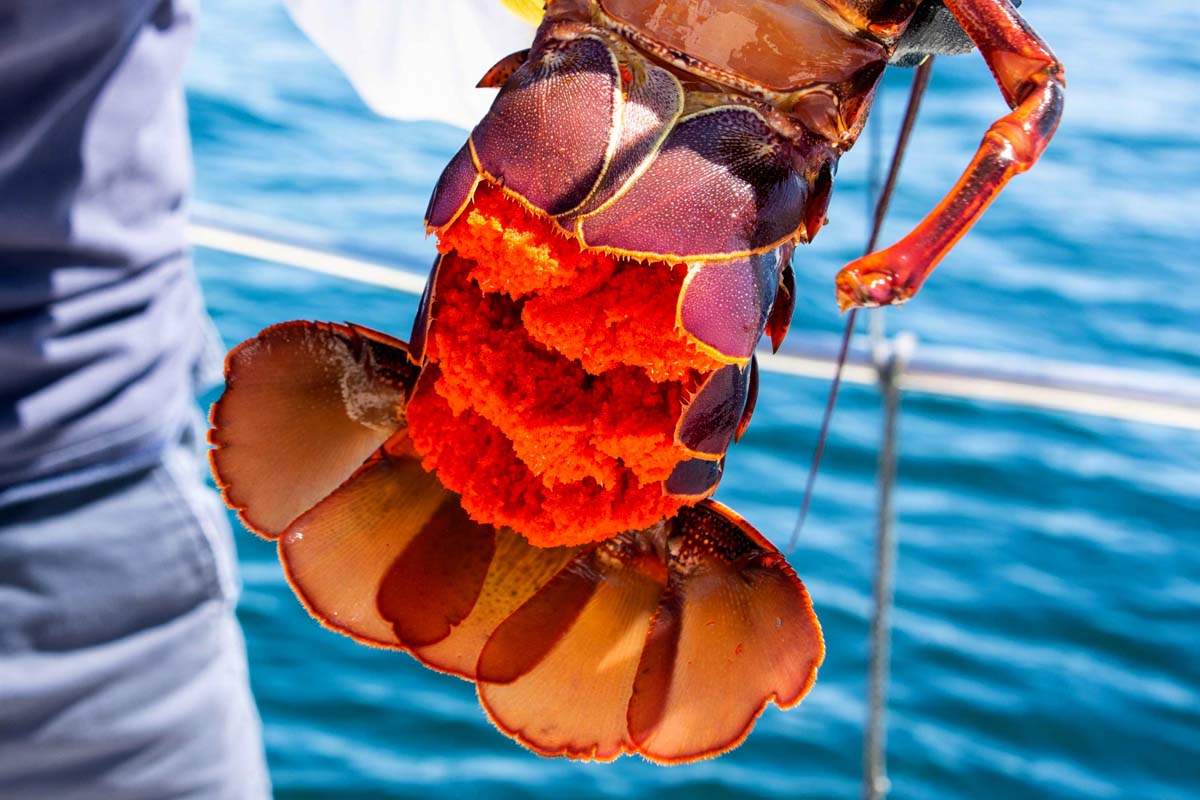 All these lobsters were big ones, except for one.  This means that they were in the prime of their breeding lives.  The older the animals get the more eggs they have.  A mature female, say about 15 years old, releases over 600,000 eggs.  Man, that is a LOT of baby lobsters!

While I have no idea how many eggs this gal was carrying, suffice it to say we all felt like proud parents knowing this lady was going to live to see those young ones go out into the world. 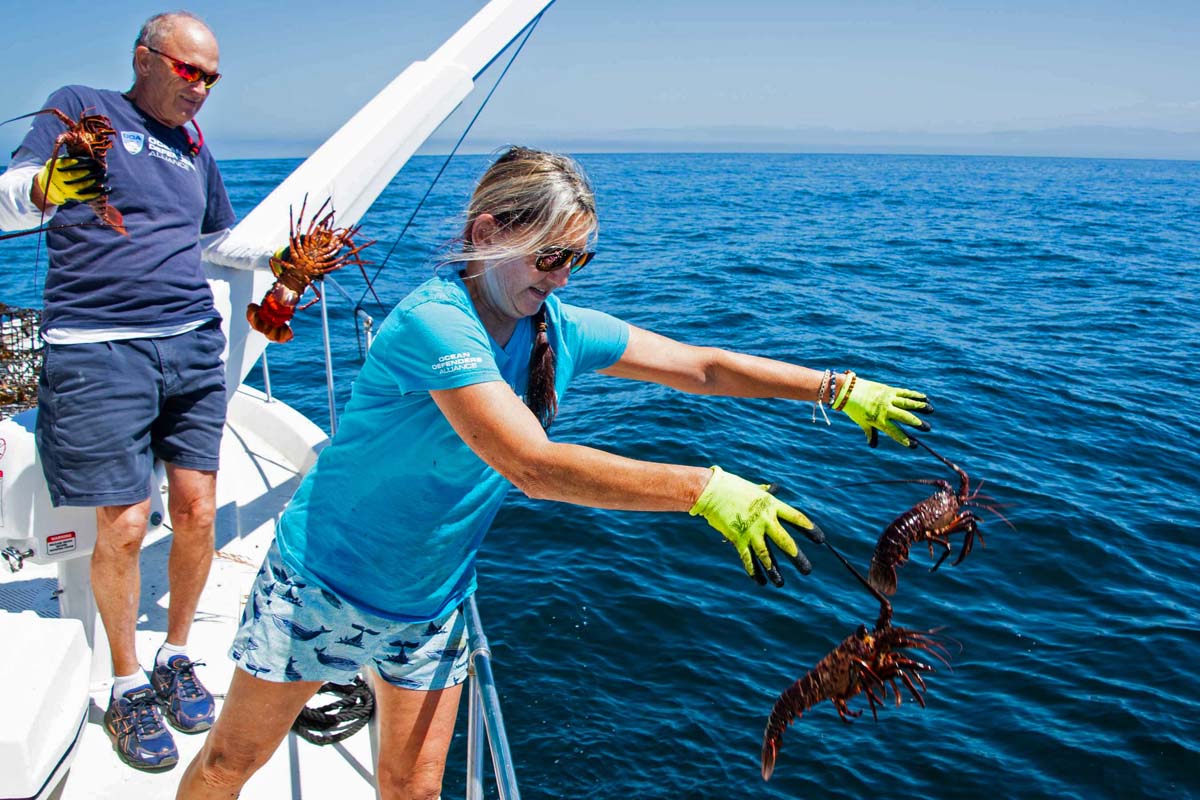 In all, there were seven lobsters that we released, as well as one sheep crab.  I think you can tell by the smiles on everyone’s face how we feel about giving these animals a second shot at life.

We then started to head towards the area where two other traps had been reported.  But as we kept going west along the island the seas were becoming bigger and bigger.  After 30 minutes of heading into six-foot waves, we decided to turn around.

On our way back home, we saw the patrol boat for the US Park Service.  Since we haven’t been out here in several years, I was hoping to get a chance to talk with them.  Sure enough as they headed our way, they pulled up alongside and we got to talk about traps. 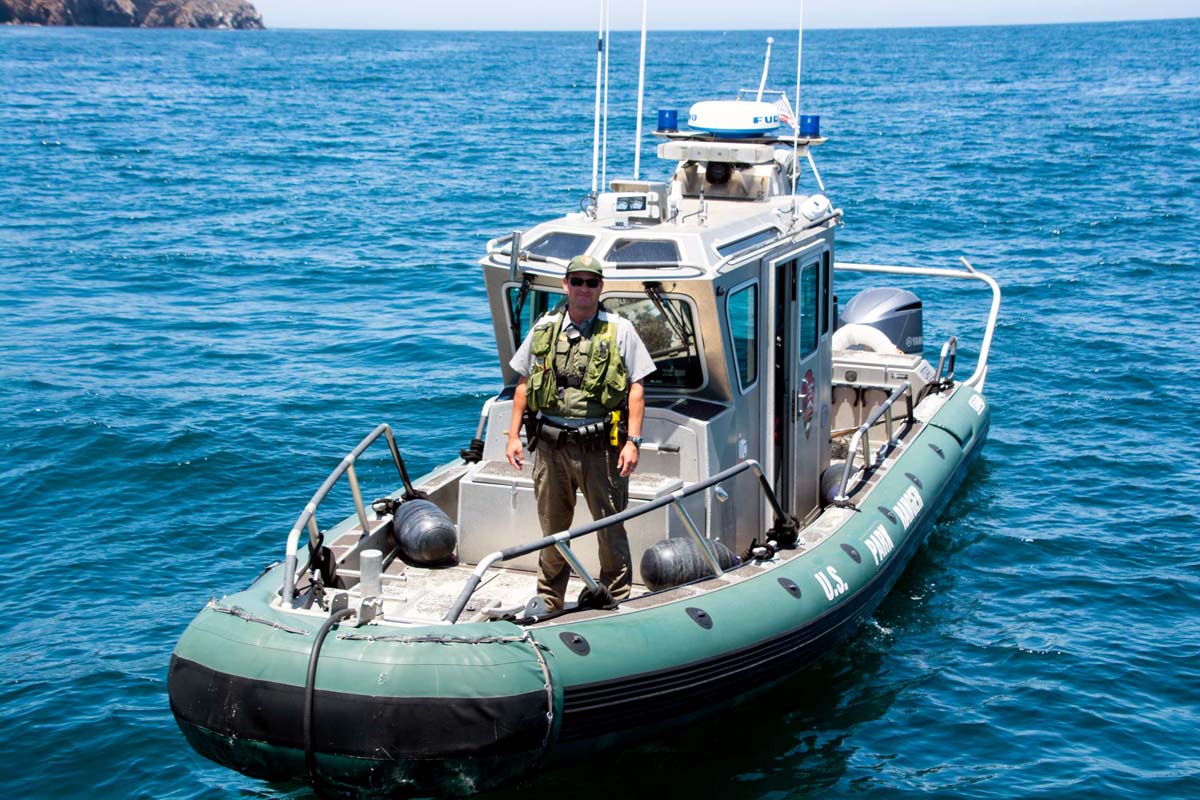 They were very supportive of our work and told us where they had seen one earlier in the day.  They asked us if we could remove that one as well.  You don’t have to ask us twice!

Yet another trap to go after

This trap was off the west end of West Anacapa Island.  It was not far out of our way to head there before we made the nine-mile voyage back to our slip at the Channel Islands Harbor.

As we got near to the spot, we saw several dozen, if not 100, brown pelicans in the water, right off the tip of the island.  I was dumbfounded to see that they were all juveniles.  I guess this is some kind of training ground for them.  We could see hundreds of the birds flying all over both islands, and Anacapa has the largest number of breeding pelicans in Southern California. 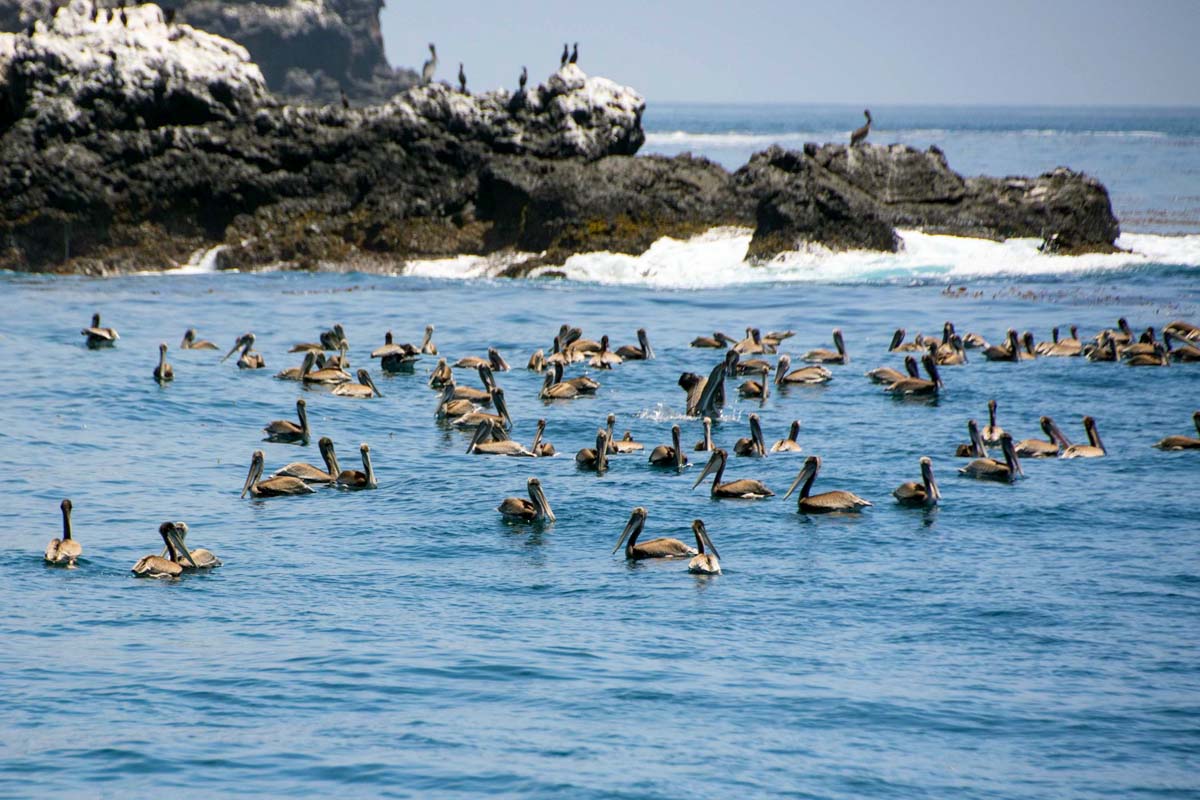 It was great to see so many of these once endangered birds soaring all over the islands, riding the winds, and give meaning to the phrase: The skies are alive!

We searched for that trap for about 30 minutes but never did find it.  We’ll be back next weekend, weather permitting.

It was so nice to be back in the waters of the Channel Islands National Marine Sanctuary. 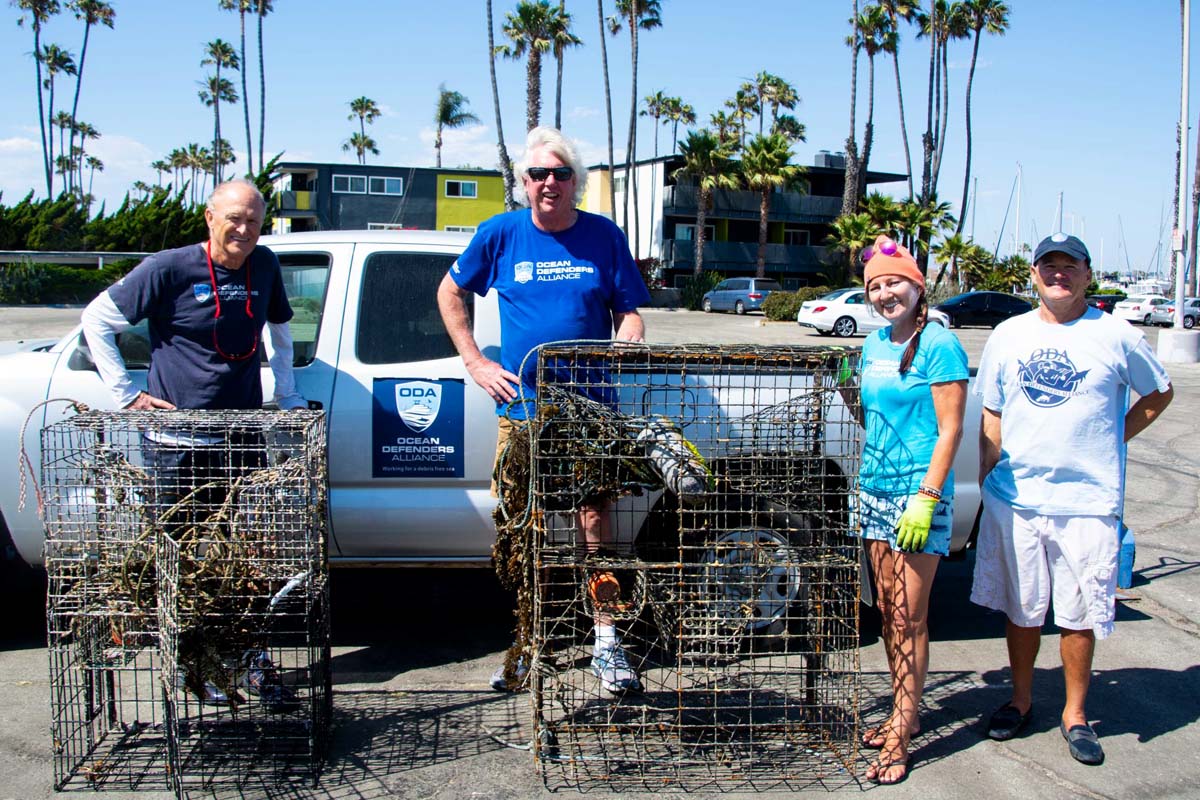 Seeing the islands and all the thousands of animals that thrive here, reinvigorated us all.  Hope it does you too!

If you want to be part of the clean-up, donating funds for fuel means you are a part of this work. Please visit our donation page now. We thank you!