Sunday, October 17th, turned out to be a rare but wonderful day for ODA: We had debris removal dive crews out in Hawai’i AND California at the same time! 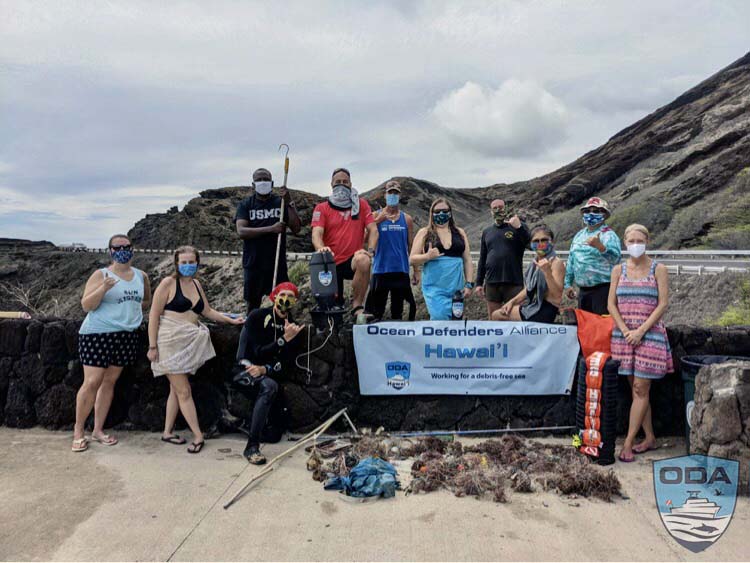 In Hawaii: Glenn Roberts organized 14 other ODA volunteer divers to cleanup an underwater reef that is really hard to dive because most of the time it is battered by waves that make the site inhospitable to even the most seasoned diver.  It’s on the south east side of Oahu.

Halona Blowhole is not very far from Hanauma Bay, but unlike that bay, Halona is more exposed to the waves - which hit the cliffs with such tremendous force that the water can shoot 20 to 30 feet into the air.  There is a small crevice in the cliff that acts a kind of funnel, and blows the water straight up into the air in a spectacular fountain.

Drawn by its beauty, many an unwary photographer or thrill seeker has lost their life here trying to get too close to the blowhole.  The locals know all about its history and stay a safe distance away.

As with all areas around Oahu, fishermen use the steep cliffs to cast their lines into the deep waters, knowing there are fish below.  This area has been used this way for eons.

Christine Pang has been diving with the ODA cleanup crew for years now, and after hearing one of her friends talk about the fishing here, came up with the idea that there was probably a lot of discarded fishing gear on the corals and rocks that surround the area.

Because the government has been shutting down a lot of the dive boat operators due to the pandemic, as well as several beaches, Christine brought up the idea of doing a cleanup dive there to Glenn Roberts and Ken Staples.

Glenn took the lead and gathered experienced ODA divers and coordinated a Sunday cleanup dive – 15 of them altogether.

They selected a day that turned out to be perfect for dive conditions, at least initially.  They even had a new device that Ed Sisino had designed and built. 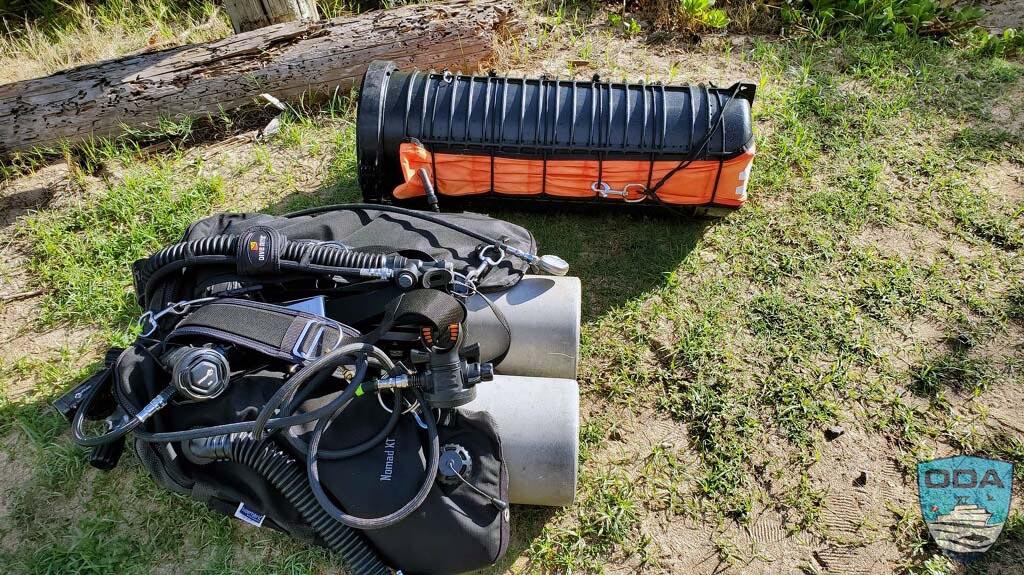 We’ll call it Ed’s Lead-n-Line Eater.  It’s basically a long tube with a cap on both ends that lets water flow through but not the debris that you put in it.  It can be attached by a line, to a scooter, and towed to and from shore, or a boat.  The vents at either end allow you to put the lead weights and line in, but will not allow the debris to get out until you remove the caps when you are safely back on land or on the boat.  GREAT idea Ed!  Thank you, and yer’ hired!!

There is a beach entry to the dive site, but once you kick out a few yards the bottom drops away quickly, down to 40 - 50 feet.  This beach was featured in the movie “From Here to Eternity”, and is thus called Eternity Beach.  Everyone made it in safely and got to work quickly.

There was fishing line all over the coral heads and cliffs, and lots of other miscellaneous marine debris - including this spark plug that had 3 nudibranchs grazing on it. 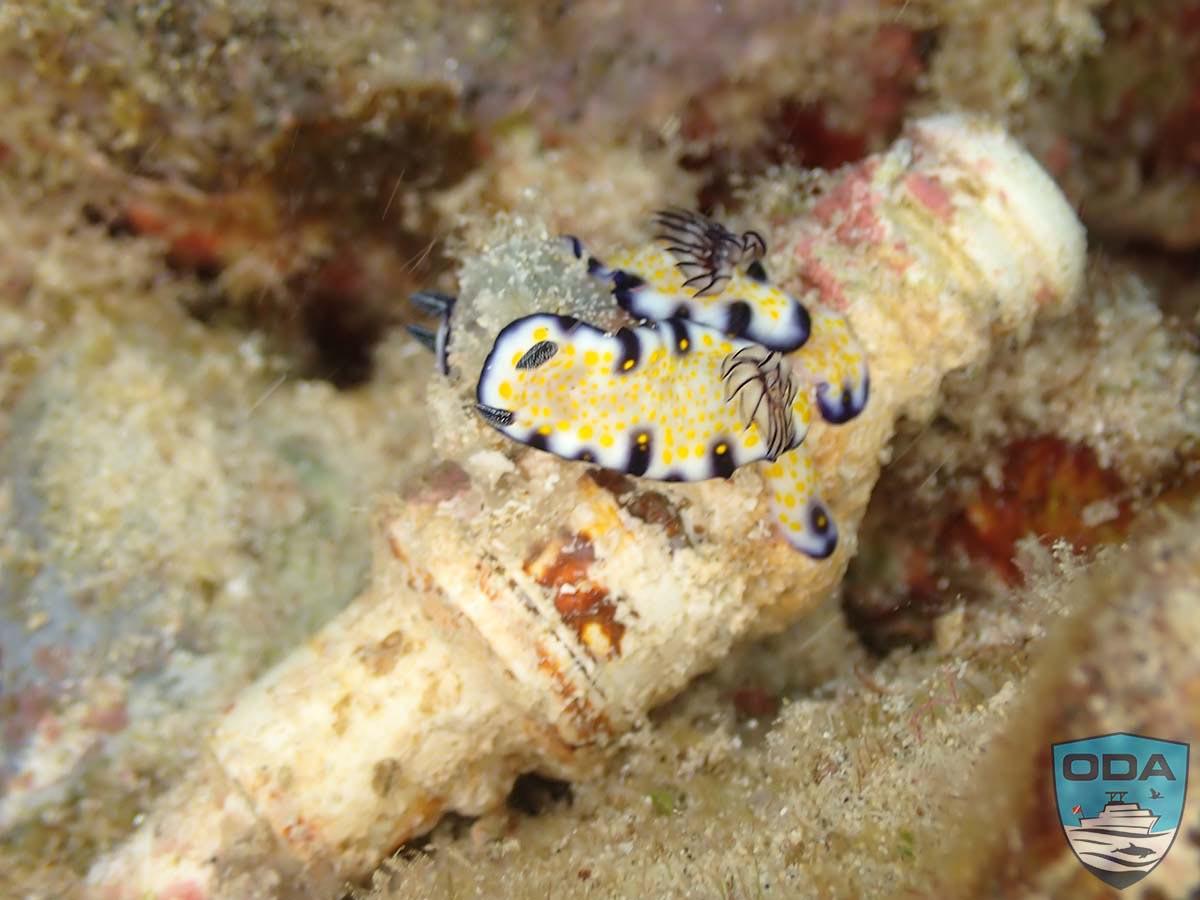 Cindy Staples took the shot.  Even though that plug looks benign, the body of it is made out of plastic and will leach the toxins that are used to manufacture it, in to the water (and the animals on it) for decades.  It is especially harmful to any animals that might lay their eggs on it, which is what the nudi’s in this picture are doing.

The divers were down for about an hour, and by that time the current started to really get strong.  Realizing this, the crew made the decision to head back to shore.  Knowing that there is still a lot of fishing line to remove, they will come back another day.

One diver was unable to get back to the beach because of the ripping currents and did the smart thing.  He let the current carry him to a spot where he safely climbed up some rocks and exited the water.  He had to take a long walk back to the parking lot, but as they say: DISCRETION IS THE BETTER PART OF VALOR (and safety first, ALWAYS!)!

Thanks to everyone who participated, and to Christine, Glenn, Ken, and Ed for all the planning that it took to make this a very fun and successful cleanup dive.

Roughly 2,400 feet of toxic, entangling fishing line is now free from the corals, along with a variety of poisonous lead weights and deadly fishing lures.

You may have already read about our California activities on the same day, but if not, here you go: https://www.oceandefenders.org/index.php/news-and-media/beautiful-coastal-waters-become-a-dangerous-jungle-for-whales.html 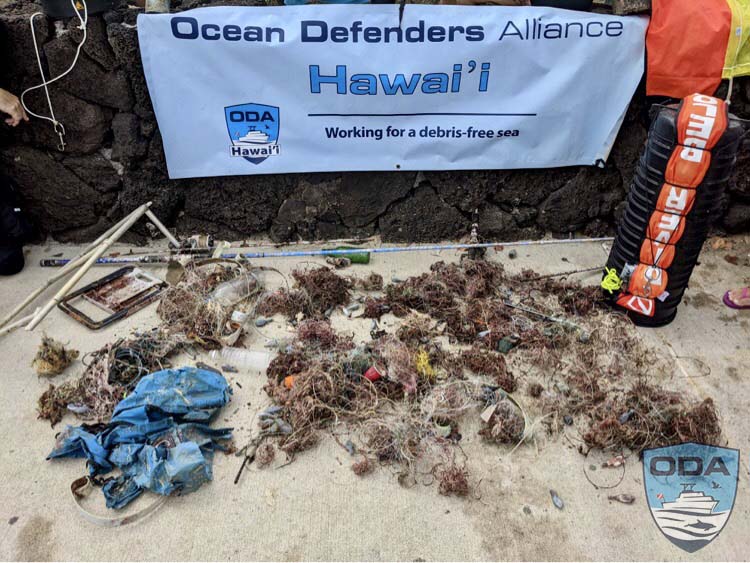