I used to hitchhike as a teenager. Well, here I am now “hitchhiking for a cause”! You see, in early October I had sent around an email asking if anyone had a boat who could take me out to the Channel Islands to help ODA with our Trap Trackers program with a goal of protecting whales from being entangled in lines (as you see in the example below).  A few people responded that they could possibly help us out. 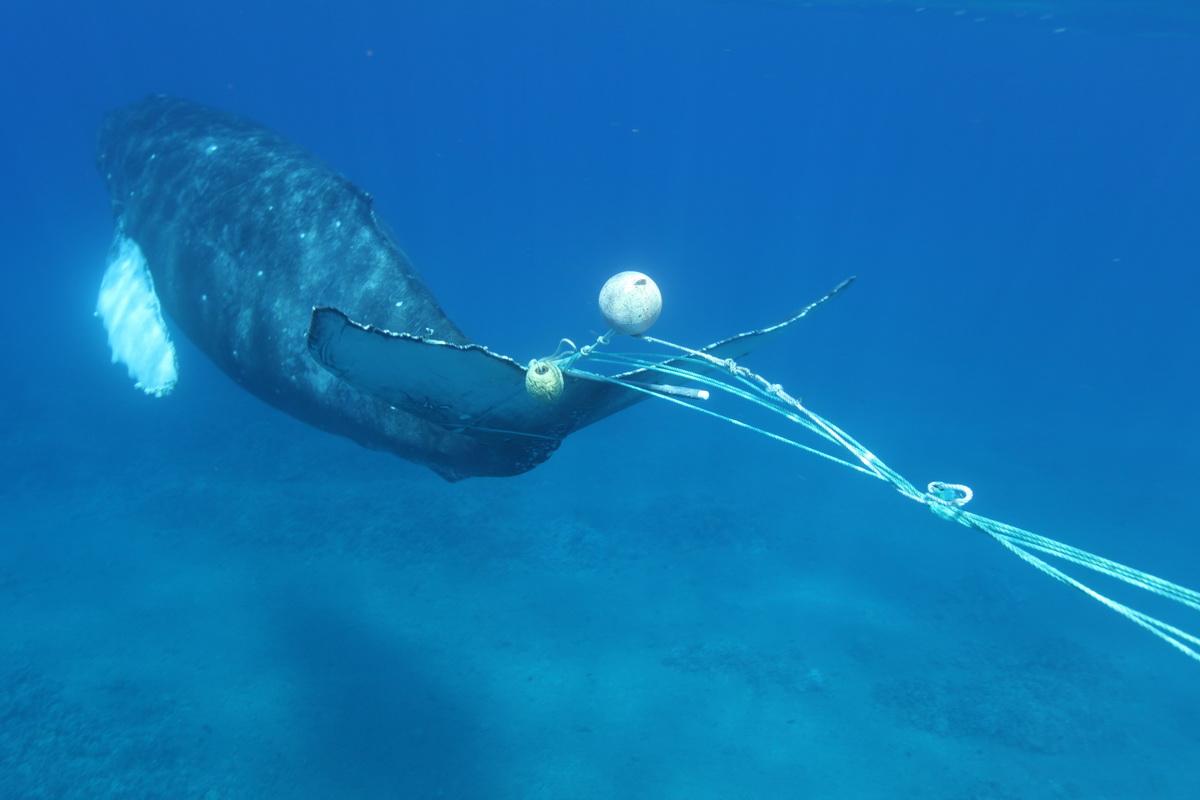 After a few false starts, I finally got a call from David Comden.  David is a reporter, lives in Ventura, and knows just about everyone in the city.  He had asked a friend of his, Nolan, if he would oblige.  He did, and on Saturday, October 31st, we boarded Nolan’s 24-foot boat and motored from Ventura Harbor to Santa Cruz Island.  There was a total of five of us onboard: Nolan, Mike (his father), Jarek (his brother), David, and me.

It was a strange weather day, with the seas mildly flat, but there was a noticeable swell coming from the northwest.  So, even though the seas were calm, we were taking a pounding by some 2-3-foot swells.  It wasn’t an unpleasant ride, but you did have to hold on as the bow would rise up and slam you down on the back end of the wave.

In addition to that, there was a thick blanket of fog that we had to cut through.  The fog never really lifted, all day.  Luckily, Nolan had a radar unit, so he could “see” if there were any boats or navigational hazards in front of us.  It took us about an hour to get to Santa Cruz, and when we got there, we really had a hard time making out where the island was, visually due to the fog. 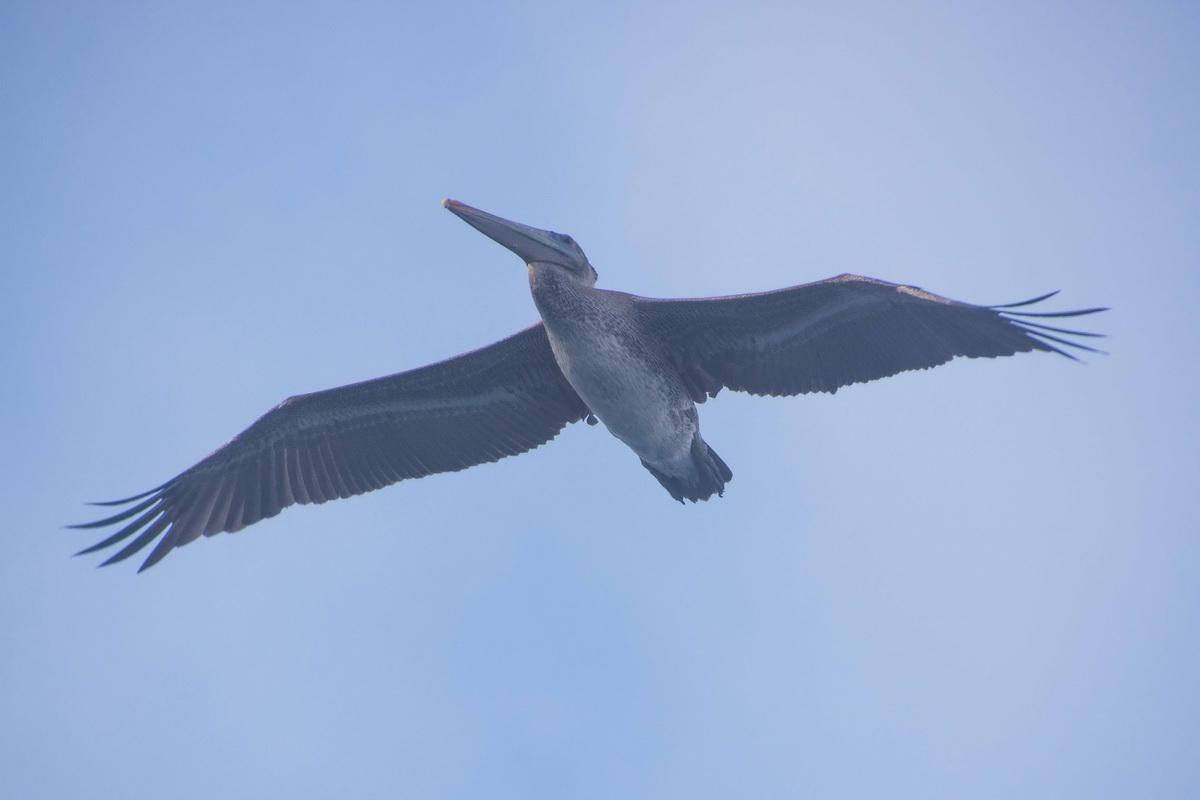 The Borders of the MPAs are Dangerous for Whales

I was trying to locate a spot called Scorpions.  This is a Marine Protected Area (MPA) and a NO-TAKE zone.  The fishermen set their traps right on the border of the MPA, legally, knowing that there are lots of lobsters that move in and out of the reserve all day long.

With so many lobstermen hoping to get their share, they invariably set the traps really close together.  This can create a kind of wall of vertically hanging lines – they’re attached to the trap on the ocean floor and the trap marker (buoy) on the surface.  This is where we see a potential for whale entanglements.

The goal of our program is to inform the government, enforcement agencies, and the public about these trap sets, to allow them to make more informed decisions to reduce the likelihood of a whale becoming entangled.

We headed first to the far west side of Scorpions to see if there were any traps set there.  After motoring around for 10 minutes we didn’t spot any.  Hmmm…

Then we headed to the east side of Scorpions about 15 minutes away.  As soon as we reached the boundary, we saw lots of traps set there.  By this time, the fog wasn’t as thick, so we could see the trap buoys from just outside the surf zone near shore, out to the last buoy, something like a half mile out.

We documented all those traps, about 75 of them, and then headed east, to Anacapa Island.

Onto Another Spot Familiar to ODA

The gap between the two islands is about five miles and whales are frequently seen here, although we didn’t see any this day.  I wanted to see if any traps were set here as well but didn’t see any.

Until we got to the tip of Anacapa; a spot called West End.  Over the years, we’ve removed lots of abandoned traps from this area after the end of lobster season.  So, I already knew that we would find legally set ones here.  Nolan maneuvered his boat around the area as I gathered the GPS numbers. 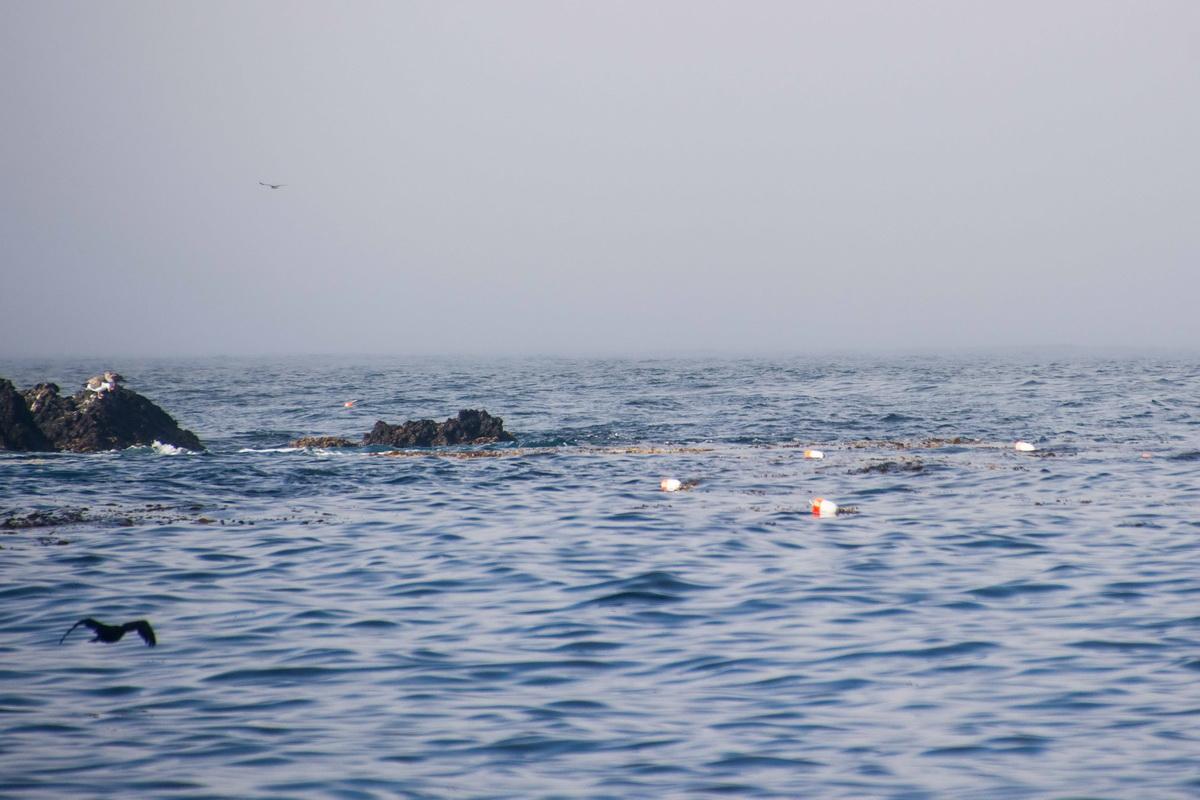 We kept heading west, along the northern side of the island, heading for another MPA called Anacapa Island State Marine Reserve.  This is another NO-TAKE zone.  It lies on the north side of the island and encompasses the offshore waters from Frenchy’s Cove on the west to Arch Rock on the far east.

As we motored very slowly towards Frenchy’s, even though we were only 200 yards offshore, we could hardly see the island at all due to the fog.  We saw dozens and dozens of brown pelicans swooping all over the place.  We even, kind of, got to see a small pelican rookery on one sheer cliff face. 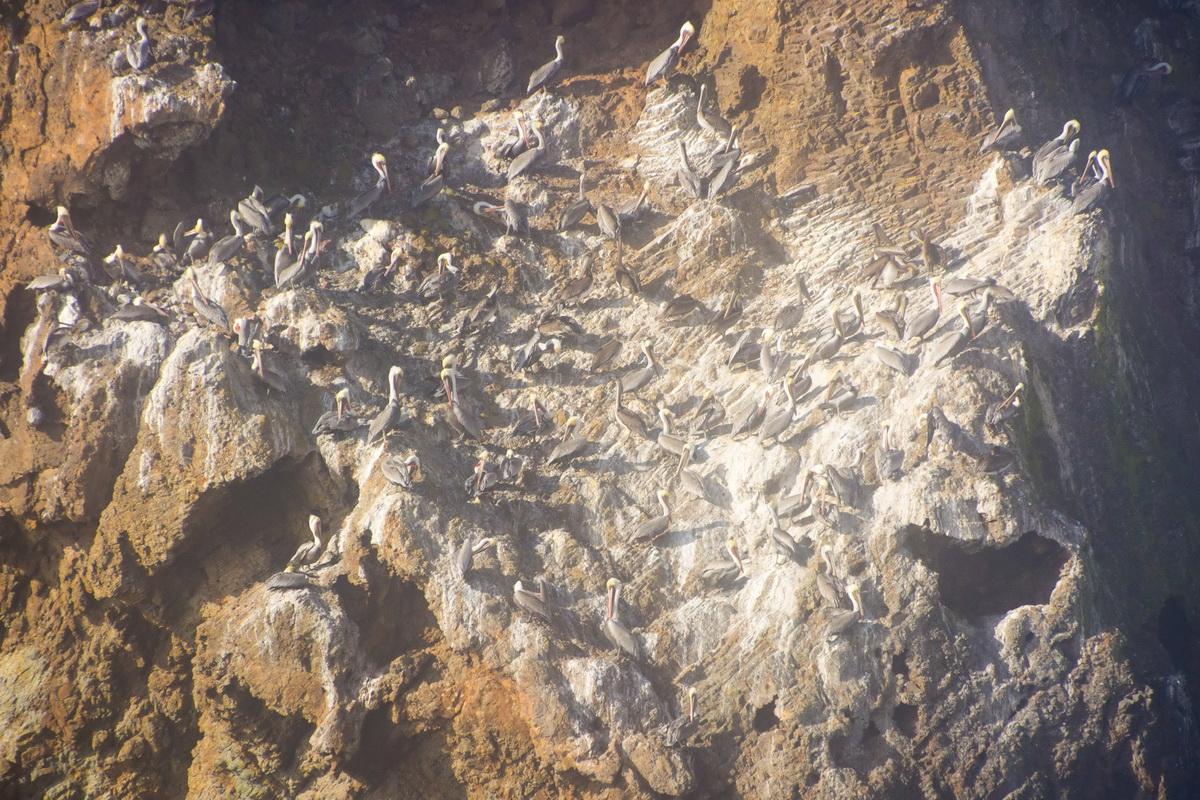 We were still able to see the trap buoys, so I continued getting the GPS numbers for them.  When we arrived at Frenchy’s, I had expected to see a line of traps set there.  Nothing but a few scattered traps.  Feeling that there weren’t enough to be a problem for whales, we made our way to Arch Rock.

By this time, the fog was REALLY thick.  When we got to where we thought the Arch should be, you had to have night vision to actually see it…We got within about 100 feet and there it was!  Or was that an apparition?  It was Halloween after all! 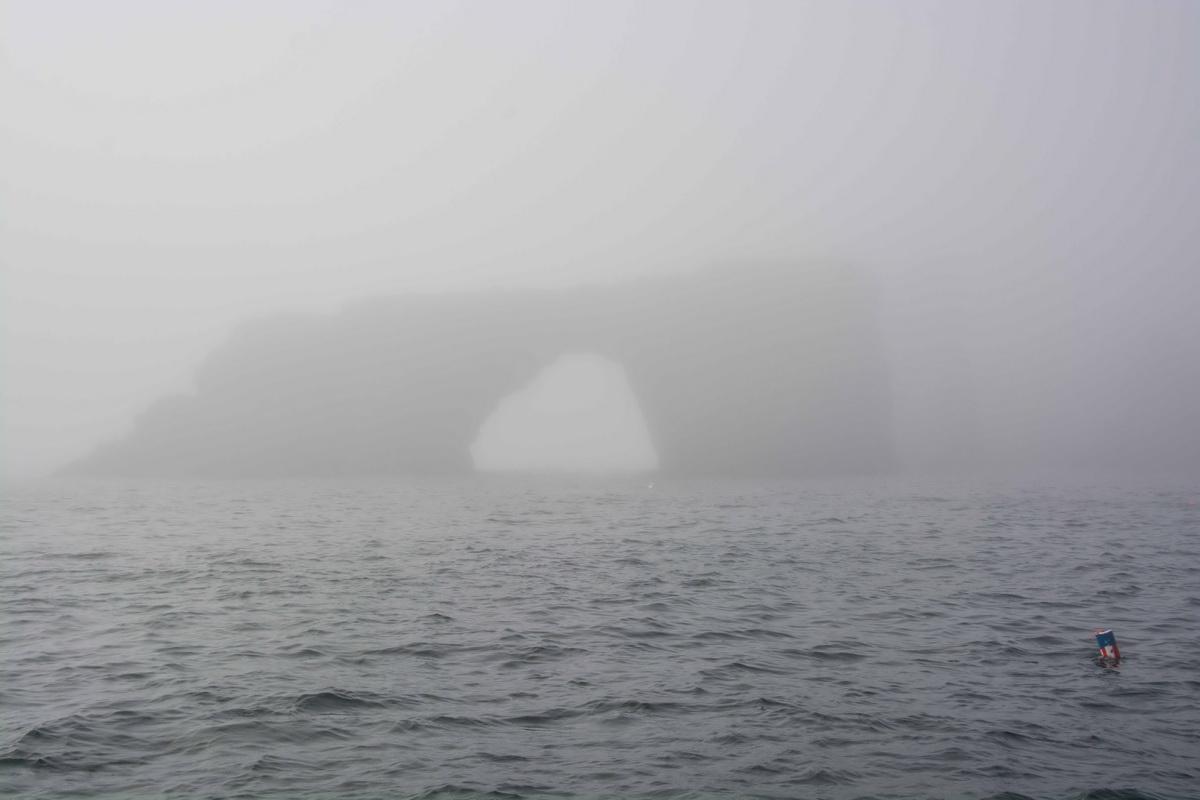 We now could see a line of traps set, so as we recorded GPS locations, we motored away from shore and got the numbers that I came for.  Phew!

Been there, cleaned that…

As we finished that, Nolan decided to go to the other side, south of Anacapa to do some fishing.  As we rounded the corner and headed along the back side of the island, it was like night and day.  The fog was nowhere to be seen and blue skies abounded.

He headed to a spot called Cat Rock. 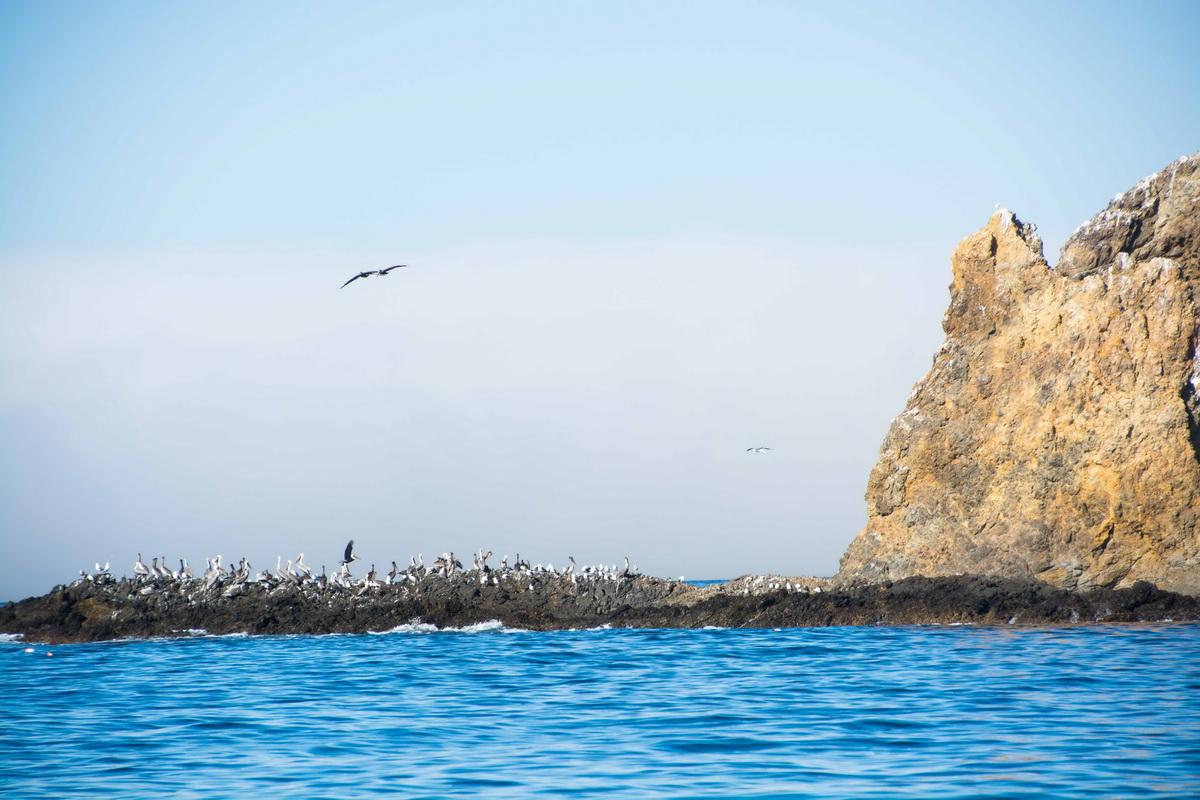 I know the spot well, as we have removed dozens of abandoned traps from the area in years past, as well as thousands of pounds of nets.

As we made our way, we were treated to a sight, the likes of which I have never witnessed before.  The fog was covering the island like a coat of cotton.  Probably 30 feet thick, but once it cascaded down this side of the island it magically dissipated.  Wow.  Very eerie…AND cool! 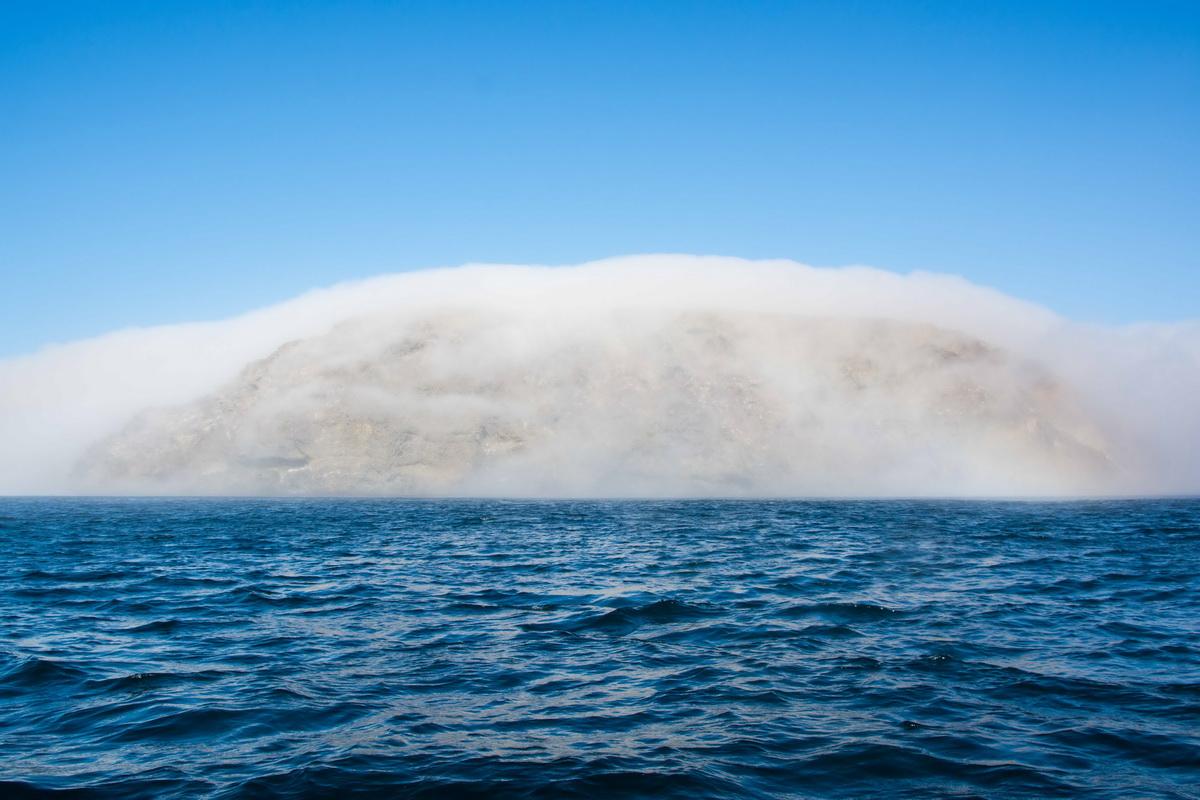 Nolan dropped anchor near Cat Rock and stuck some baited hooks in the water.  Including a couple of hoop nets to catch some lobsters.  After 30 minutes or so, they all came up empty.  Yeah!

As he was leaving the site, I saw hundreds of trap buoys, so I asked him to let me get the numbers for those as well, and he obliged again.

We then headed back to the port of Ventura.  On the way back it was fog, fog, and more fog.  So much so that the entire 17-mile ride back we couldn’t see more than 100 yards in front, on the sides or behind us…

We clean the oceans for these and more

At one point we did chance upon a pod of dolphins near us.  So, Nolan slowed down enough to let me get a few shots of them.  Although these are not the vibrant shots you normally get off “sunny Southern California” it did convey the way the day went. 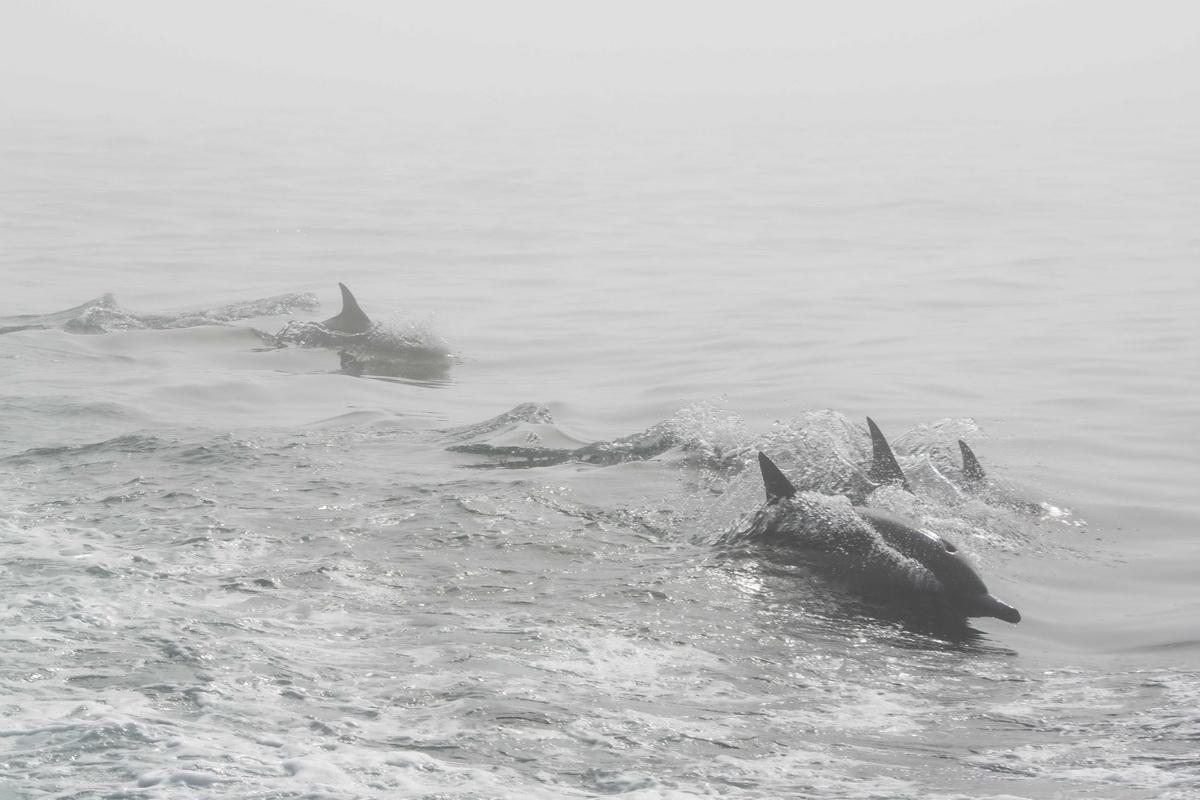 Encased in nothing but fog for the majority of the day, but beautiful, nonetheless.

It was a very beneficial day for our Trap Tracking program.  We got the GPS locations for another 374 traps.  Not bad for hardly being able to see anything!

If you value this citizen science that will protect whales, please join us by making a donation towards our efforts to track traps and make the seas safe for whales and all ocean wildlife. Thank you!