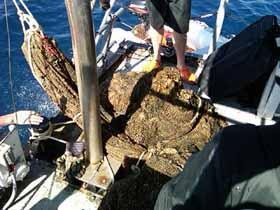 Oct. 11 - Orange County, CA -- When I picked up Jim Lieber to head out to the Clearwater early in the morning, it was still dark outside. We were scheduled to meet up with 3 divers from the Ocean Adventures Dive Club. This was the rebreather team, which consisted of Mike Wynd, Richard Graff and Terry Anderson. Jim was 1st mate and Jeff Conner came along as navigator and my dive partner.

As we motored out beyond Angels Gate the seas were as flat as they were in the harbor, very unusual. As we headed to the Caissons you could see nothing but blue water underneath us. Catalina Island looked like it was a couple of miles away, even though it was 20 miles in reality.

When we got to the site we made a couple of passes over the Caissons before we felt good about our position over the structures and dropped anchor. Thanks to the navigational skills of Jeff, the anchor laid about 20 feet away from our target.

Mike, Richard and Terry quickly (well, Richard not so quickly) got suited up and headed down the anchor line to the sand at 150 deep. We watched them descend at 10:15am, and were amazed at how clear the water was. The plan was for them to cut up some net, roll it up into a tube shaped configuration, wrap some ropes around it in several spots and then attach a line from the middle of it to a float bag that they would send to the surface. This would allow us to pull up the whole bundle while the divers were safely on the boat.

The plan allowed them to be at that depth for about an hour and a half, with a one hour decompression stop. Jeff and I were going to go down after they were at the site and had started their work. Just as we were starting to put our dive gear on we saw the float bag come to the surface. Jim, Jeff and I sat there scratching our heads; it had only been a half hour since they had gone down. What the heck was going on...?

We quickly went to the bow to see if they were coming up the anchor line, and sure enough, they were. So Jeff and I decided to wait until they surfaced to make sure they were alright before we went for our dive. About an hour later Terry surfaced and told us that all was well and that they had gotten their job done.

What?!! How could they get all that done in a half hour? It turns out that they cut the net, tied it into a tube and sent to float line up with no problems. Since this was Terry's first time out with us, he didn't know if this was a good haul or not. But when Mike and Richard came aboard, they said it was a pretty good size chunk of net.

Jeff and I decided to go ahead with our dive and then lift the net later. As we descended I was amazed at how clear the water was. When we reached 110 feet I could see the top of the Caissons, which were about 50 feet away from us. I'd have to say visibility was something like 70-80 feet! Unbelievable for California.

We only have 12 minutes at this depth before we have to begin our ascent, so Jeff and I did a quick swim around the site. I was stunned by the beauty. The Caissons are concrete structures that are sitting up vertically in the sand, and rise straight up 40 feet from the bottom. They are about 50 feet in diameter and have life on every square inch of surface area.

Anemones are the dominant species (pink, red and orange), with gorgonians standing 2-3 feet tall, starfish, crabs, shrimp, lots of scallops and thousands of small fish schooling around. As a bonus I saw a sight that I rarely see, about a dozen large male sheephead. Terry said he saw a Mola Mola on the inside of the Caissons that was about 5 feet long.

As we made our way back up the anchor line, I was thinking how fortunate I am to be able to go see this type of man made structure become a garden for so many animals.

We started hauling it up from 150 feet and used our newly installed electric winch that Jeff and Don Robarge had recently installed on the rear deck. This turned out to work out extremely well. Thanks you two! As the net broke the surface I could tell it was big, but had no idea how big until we tried to wrestle it aboard. We had a helluva time getting it into position to be pulled onto the deck. It took us probably half an hour to finally get it all on board.

Jim and I spent the better part of the ride back cutting the net into pieces that we could haul off the boat to bring it to the dumpster. It was a messy job, we were covered in slime and we smelled like.....well you fill in the blank.

One really disturbing thing about this net is that the mesh size is only 1 inch. What we removed probably covered an area of 30 x 80 feet (2,400 square feet). No fish could escape this thing. This is just one section of one net that is on the Caissons and it weighed somewhere between 500 to 700 pounds, wet.

This was one of those days that everything went right, except for Mike bringing up several gallons of water in his dry suit that was not so dry. We all came home safely and smiles were on everyone's faces as we headed back to port. What an end to a glorious day of diving.

The New Age Cowboys of the Sea were treated to the best dive conditions of the year!