This is a letter from paradise, or what looks like paradise, until you look a little deeper…  Like right under your feet. 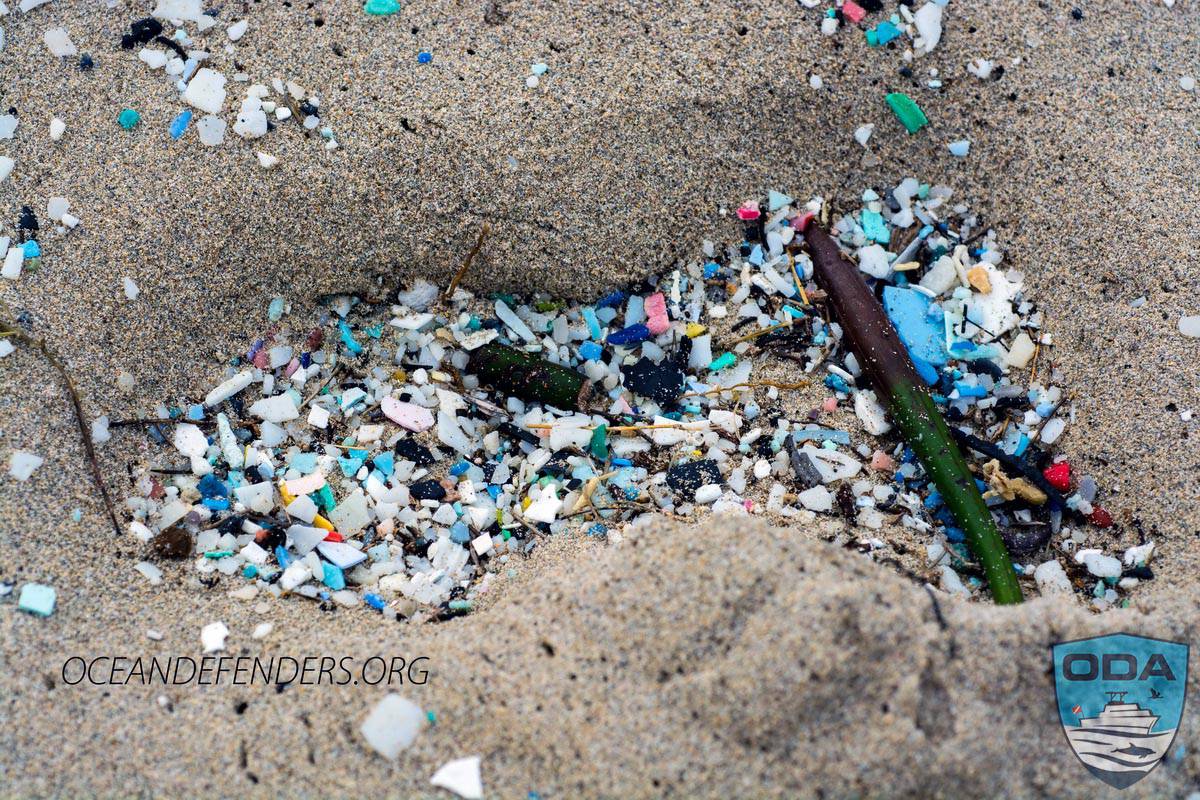 I took this shot last week on Oahu, at a place on the east side of the island, called Kailua Beach.  This beach has consistently been rated one of the top ten beaches in the world, for its beauty and remoteness.

But it has been in the press recently due to a massive amount of microplastics that have been inundating the place.  Volunteers have come from all over the island to do as much as they can to help remove thousands of pounds of the stuff.

I went there with ODA volunteers Ken Staples and AJ Jaeger after seeing video and pictures of what it looked like after the recent storms had washed this debris ashore.  We got there 2 days after folks had removed over 1,000 pounds of the debris.  But when we arrived it looked like nothing had been done.  There were plastic pieces everywhere you looked, along the high tide line.  As it turns out, each new wave that hits this beach brings in another smattering of microplastics. 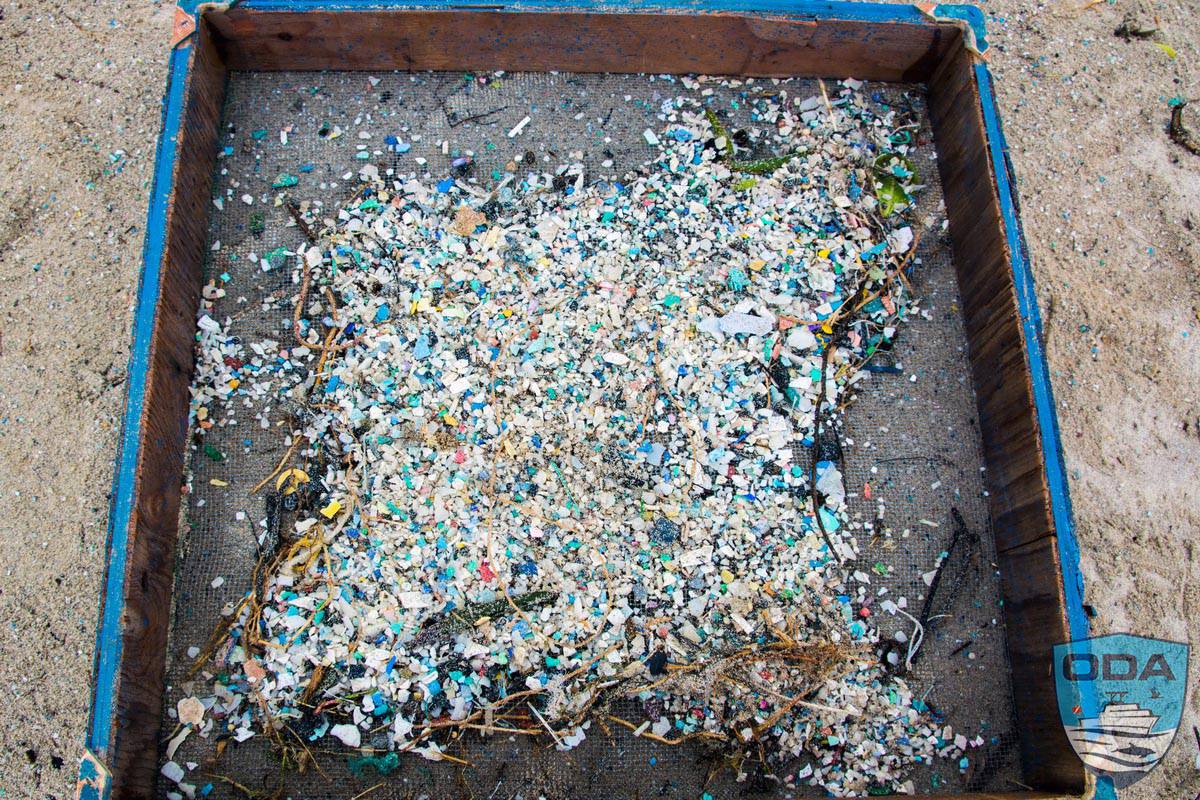 ODA has been removing plastics from the oceans, rivers and wetlands for years now.  Up until now, it has been debris that is mostly intact, and easy to pick up with trash grabbers.  But this stuff was smaller than your fingernail.  Impossible to remove with the grabbers…

The people who had been there days earlier, left behind the tools that they used to remove the debris.  I met a guy there who was with his young son, and they were removing some of the debris by themselves.  As I talked to the guy, he told me he’s lived there all his life and learned how to surf here.  When I asked him if he had ever seen the beach this overrun with plastics, he started crying as he said “no, and I can’t even fish here because of all the plastic in their guts”.  He was fearful of the world his son was going to grow up in.  They had been there for a couple of hours and left shortly after we met. 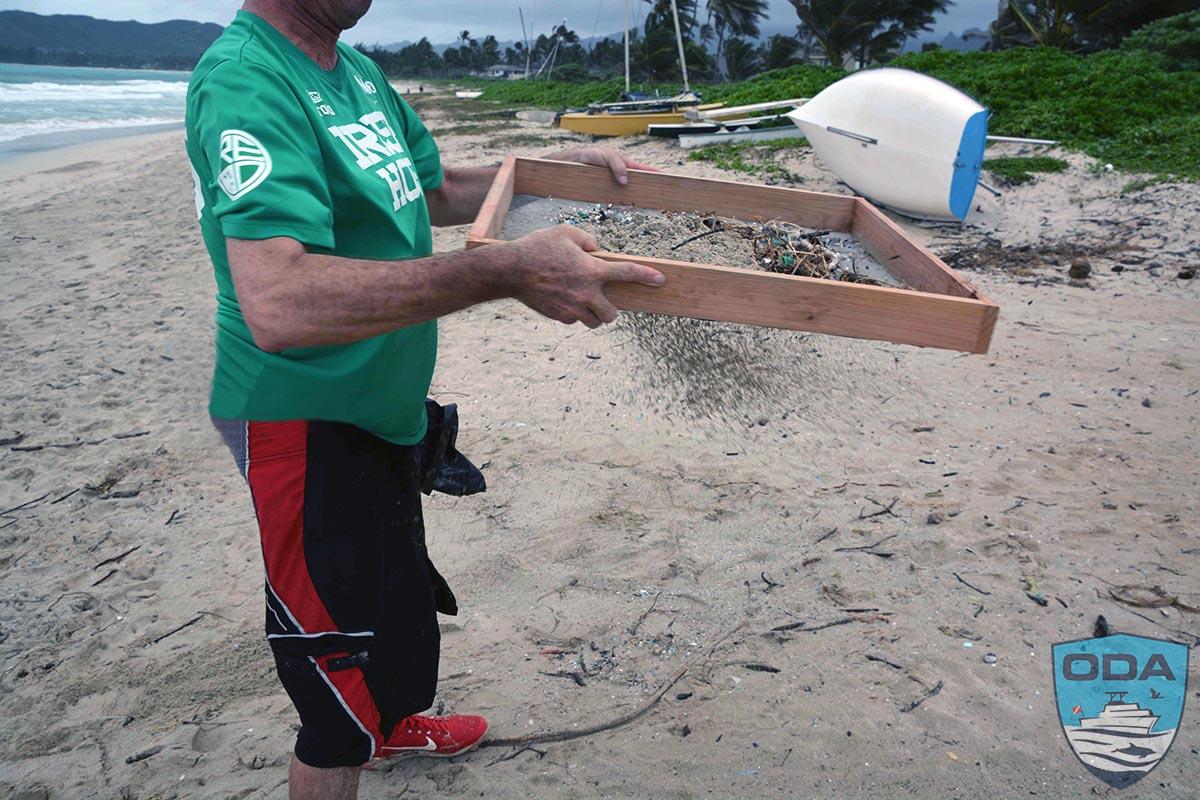 So I picked up where they left off, grabbed a small bucket and started skimming the plastics off the sand.  Then when I had about 15 pounds in the bucket, I dumped it into a sifter, just to see how much plastics would be left behind.

Much to my astonishment there was about 7 pounds of plastics remaining.  I repeated the process for about another hour and called it quits.  There was no way one person could make a dent in the never-ending pile the waves were leaving behind.

While this particular event is a one off for this site, episodes like this are happening all over the world, AND under the water… 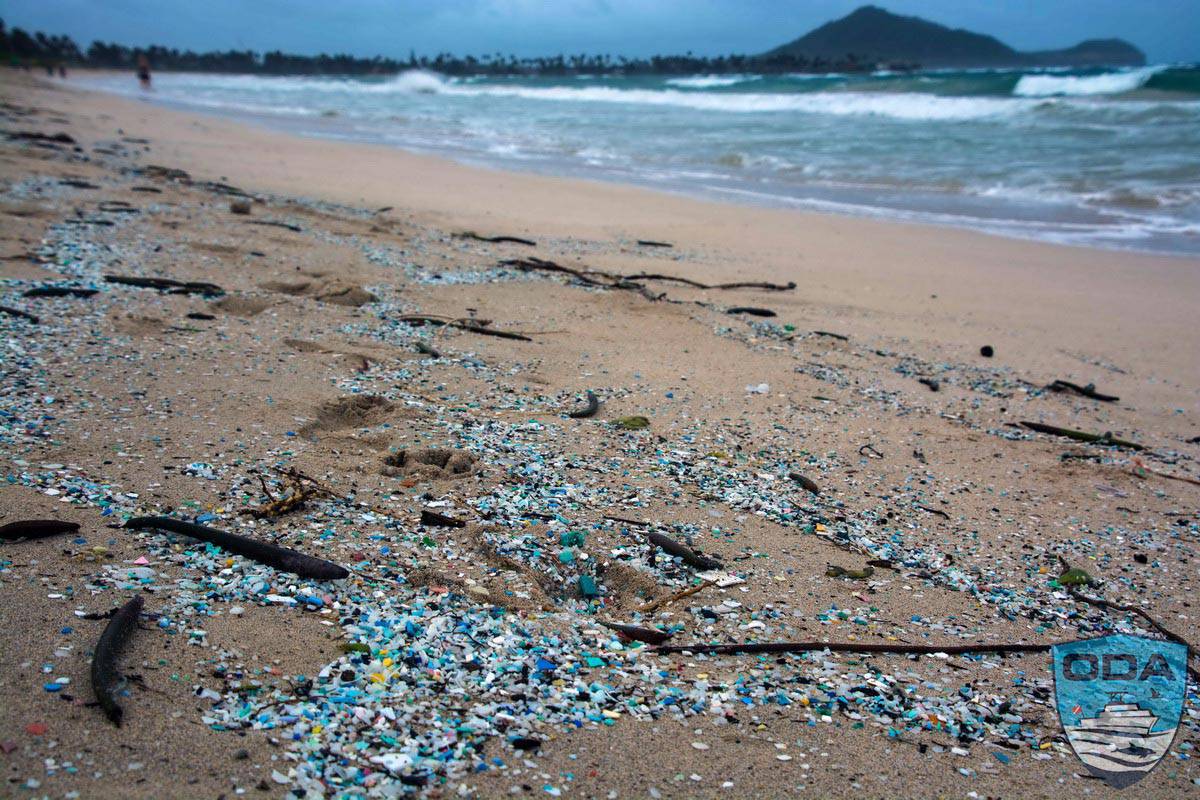 The Problem of Plastics

This speaks to a much larger problem: how do we stop this from happening in the first place?  These cleanups are just like a band-aid on someone who has been in a car wreck.  It might make the person applying it feel better for having done something about it, but it does nothing for the patient: our oceans.

Plastics are made from petroleum products, the same stuff that oil and gas are made out of.  Here in the US the oil and gas companies are finding new markets for their products by putting more efforts in to marketing and selling to plastic production companies.

Because of the global drive to move away from internal combustion engines in our transportation sector, these oil companies are looking for more diverse ways to sell their products.  Hence they are shifting their focus to plastics.

Because plastics are so cheap to produce, you can bet the industry will come up with new ways to market and sell it to us.  Even if we don’t want it.  But it is only cheap because they are not required to do anything about the stuff once it is used.  One thing to keep in mind as we go down this avenue, the cost of disposing of the product should be included in the selling price.  It’s what I call the true cost of doing business.  Cradle to grave.

Most of the landfills in the US are filled to capacity, so much so that for years we have been exporting our garbage to places like China and Vietnam.  But both countries have stopped accepting the “product” because they are now filled to capacity too.

So now we have come up with a brilliant way of getting ride of it, with 12% being incinerated…  which releases all kinds of toxins and greenhouse gasses into the air.  The agencies that do this are selling us another bill of goods by calling the process, waste to energy, a renewable energy source.  Because they can create electricity in the process.  Conveniently forgetting to mention all the toxins that are released in the process.

As far as I know, there is currently no way to dispose of plastics that do no environmental harm.  Although there are some promising scientific experiments going on.  None have been implemented on a commercial scale.  This is a universal problem, and it is all due to human greed and indifference.

We are choking the planet with this stuff, and in turn we are unwilling participants in this global scale experiment.  It is now in the food we eat, the water we drink and in the air we breathe.  A study released by the United Nations, just revealed that we are ingesting the equivalent of one credit card worth of plastics every week.

One thing we can do as individuals to stop this, or at least slow it down, is to not let these companies create new manufacturing plants in the first place.  And not allow the expansion of the existing ones.

One of the most highly polluted area of this country is Louisiana.  A Taiwanese company called Formosa Plastics just got the approval from the US Environmental Protection Agency (EPA) to go ahead with building 14 new plastic production facilities in St. James Parish, which lies between Baton Rouge and New Orleans right on the shores of the Mississippi River.  What could go wrong there?

This area is already known as “cancer alley” due to the high concentrations of oil and gas refineries.  If these facilities get built they will constitute the largest and most toxic polluters in the world!

What You Can Do To Help

If you care about this issue, please inform yourselves about where these facilities are going to be built, then start attending the meetings where the industry hacks will try to convince the local citizens how they will be good stewards of the environment and create hundreds, if not thousands, of good paying jobs.  While they completely skirt the issue of poisoned people, fish, rivers, lakes and lands.

Also, our government protection agencies are currently run by people who have worked for the industries they are supposed to regulate.  If you’ve been paying the least bit of attention to how that experiment is going, you know we need to vote these people out of office.  Vote with your fingers at the polls, and your feet at the meetings and protests.

As I reflect on my walk along the Kailua Beach, I can’t help but think that the footprints we humans have been leaving along the shores for millennium have always been erased by the tides of time.  If we don’t change our ways, those same footprints will forever be encased in plastics…