To save our salty ocean friends! 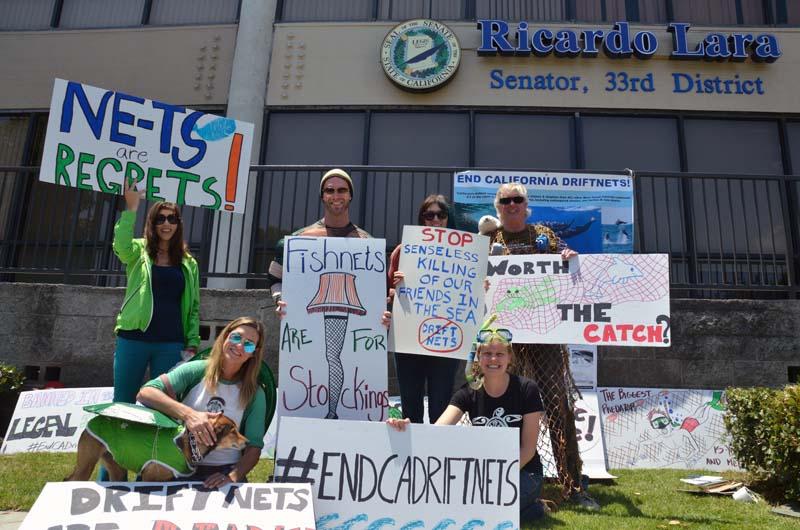 I attended a small, but energetic, rally on Tuesday, May 24th to show our support of California Senate Bill 1114.  This bill, if passed, will put an end to the driftnet industry off the coast of California.

Oregon and Washington have already abolished this extremely destructive fishing practice that has a bycatch rate of 60%--as has the entire European Union!  Normally we Californians are on the leading edge of this kind of chance, but in this case we are lagging behind. WE, you and I together, now have a chance to change that!

The rally I attended was in front of the office of State Senator Ricardo Lara, in Long Beach, CA.  Senator Lara is the head of the Appropriations Committee for this bill.  The rally was organized by Cassie Burdyshaw, of Turtle Island Restoration Network.  Thanks Cassie! 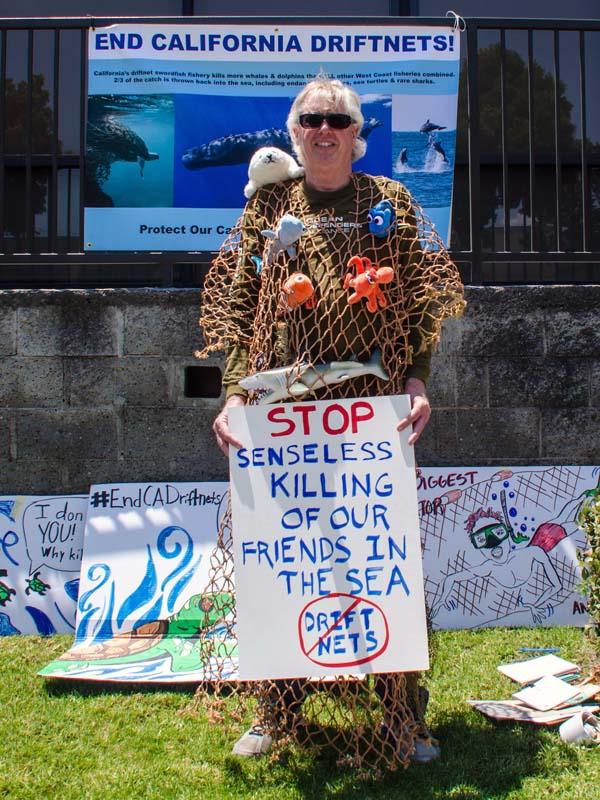 We held our banners high and talked with several people as we were standing outside the office building.  I was amazed at how informed some of the people were about how the entire bill passing process works.

At around 1:30 we went inside and met with Senator Lara’s district director, Nick Jiles.  Nick was very enthusiastic about us being there, and took time to fill us in on where the senator stands on this bill.  Here is where my learning process begins…

What exactly does “Appropriations Committee” mean?  This is a group of people that decide whether a particular bill is financially acceptable.  We were told that SB 1114 has been labeled “ON SUSPENSE.”  Which means they have determined that it will cost over $150,000 implement.  Because of that “high cost,” they want to shelve this bill.

When I asked Nick if any consideration is given to the economic and environmental gains that will come from halting the driftnet fleet, he said no.  They do not factor in such economic benefits, only the costs of the program itself.  To me, this is absolutely crazy.  How can you not factor in the cost benefit?!?!  (so much for an informed government?)

I then asked Nick what we could do to convince Senator Lara to not shelve this bill and get it moving forward, and he said letters and emails from people within his district would REALLY help.

So, if you are in California Senate District 33, please take a minute and send him a short note. This includes YOU if you are in the Los Angeles County cities and communities of Cudahy, Bell, Bell Gardens, Lynwood, Maywood, Signal Hill, Paramount, South Gate, Vernon, Walnut Park, Huntington Park, Long Beach, Lakewood, Los Angeles, and Paramount. For more district boundary information, please go here: http://sd33.senate.ca.gov/district.

Your note can be just 2 sentences—and will still make a difference!

Please also note: this bill does NOT put these fishermen out of work.  It allows them to keep fishing, but it will not allow any new licenses to be issued.

With our diminishing whale, dolphin, turtle, and fish populations, we need to do all we can to give these animals a fighting chance at survival.  SB 1114 does just that.

Please write to Senator Lara right away, as the determination is going to be made this Friday, May 27.

Thank you for being a part of our active Ocean Defenders Alliance!