Tracking Ocean Wildlife Traps by Air and by Sea

As part of ODA’s annual Trap Trackers program, a short while ago we had scheduled a flight with another non-profit called LightHawk, to fly along the coastline looking for areas where whales could potentially come in contact with the lobster trap lines.

However, two months ago, the 25,000-gallon oil spill off the coast of Huntington Beach affected a 45-mile stretch of the ocean where no fishing was allowed.  This included the commercial (and recreational) lobster fishery.

Due to that area being shut down in Orange County, we had to re-schedule our flight for a later date.

That day finally arrived on Wednesday, November 17th after authorities had re-opened the affected areas.  I met up with pilot Wayne McClelland at his hanger in Santa Barbara Airport.  Wayne volunteers his time, expertise, and plane to help scientists and researchers get a bird’s eye view of places that are of environmental interest. 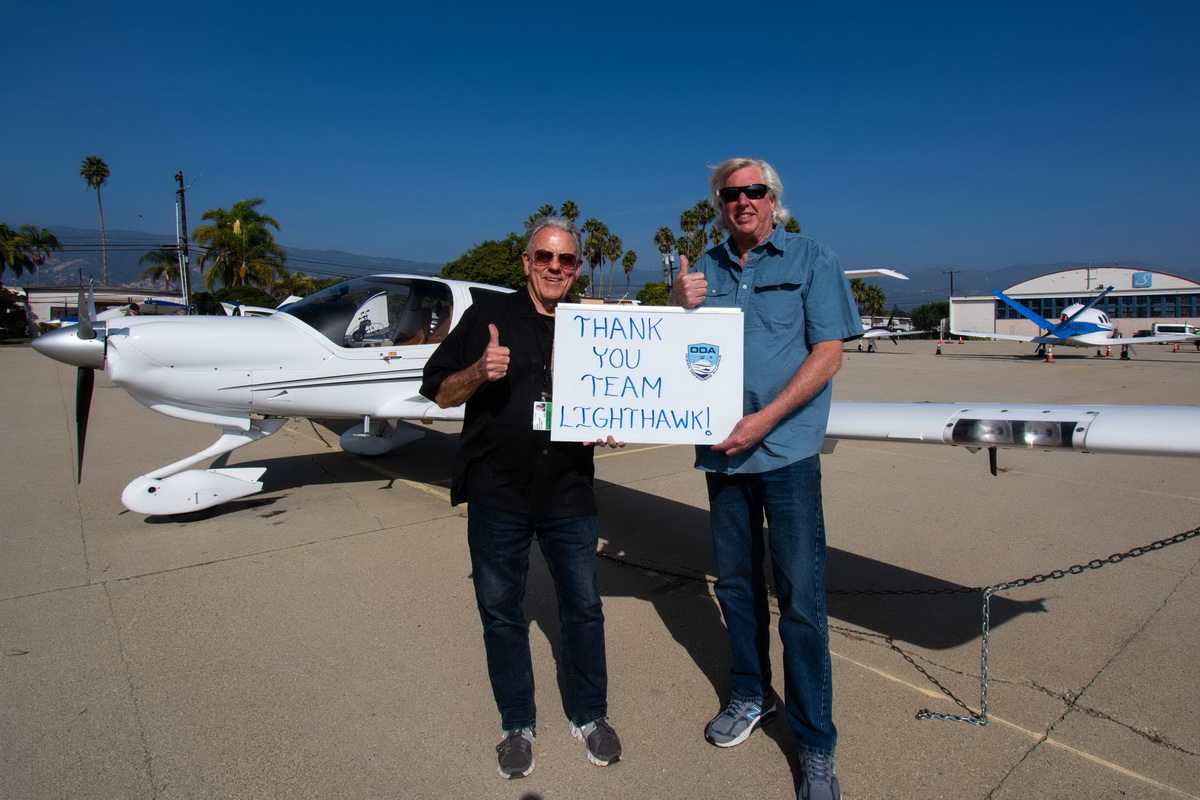 LightHawk enlists pilots, throughout the entire US, who want to volunteer their time to help with studies that investigate environmental issues.

We really appreciate this aerial service nonprofit that’s been hooking us up with their fleet of volunteers for the last six years, and I can’t tell you how much we learn from these flights!…But I will try.

ODA does these flights for two main reasons.  First, we seek to obtain information on where lobster traps get set in dense concentrations.  Once we see that from the air, we go back with our boats and use our GPS system to mark as many traps as we can, and then overlay those marks onto a map.  The goal is to inform the public and other interested parties about areas that could be a challenge for whales to swim through without becoming entangled in the trap lines.

The second reason we do this is to go back to those sites after the lobster season has closed to search for any abandoned traps that get left behind.  If we find any traps, we then remove them.  Every year the fishermen lose between 10 to 15 percent of their traps due to a variety of reasons.

I met up with Pilot Wayne at 9:30 and we were soon up and on our way.  We flew down to Santa Monica, and then headed up the coast, north, hugging the coast about quarter mile offshore, at 700 feet high.  Since I was in the passenger seat, it allowed me to see where most of the traps were located.

On this day it was really cloudy, I mean it was densely clouded.  The cloud cover was at about 1,200 feet, so as we were on our way you couldn’t even see blue skies.  Nothing but white clouds above us.  This made for nice scenery, but it was bright white all around us. 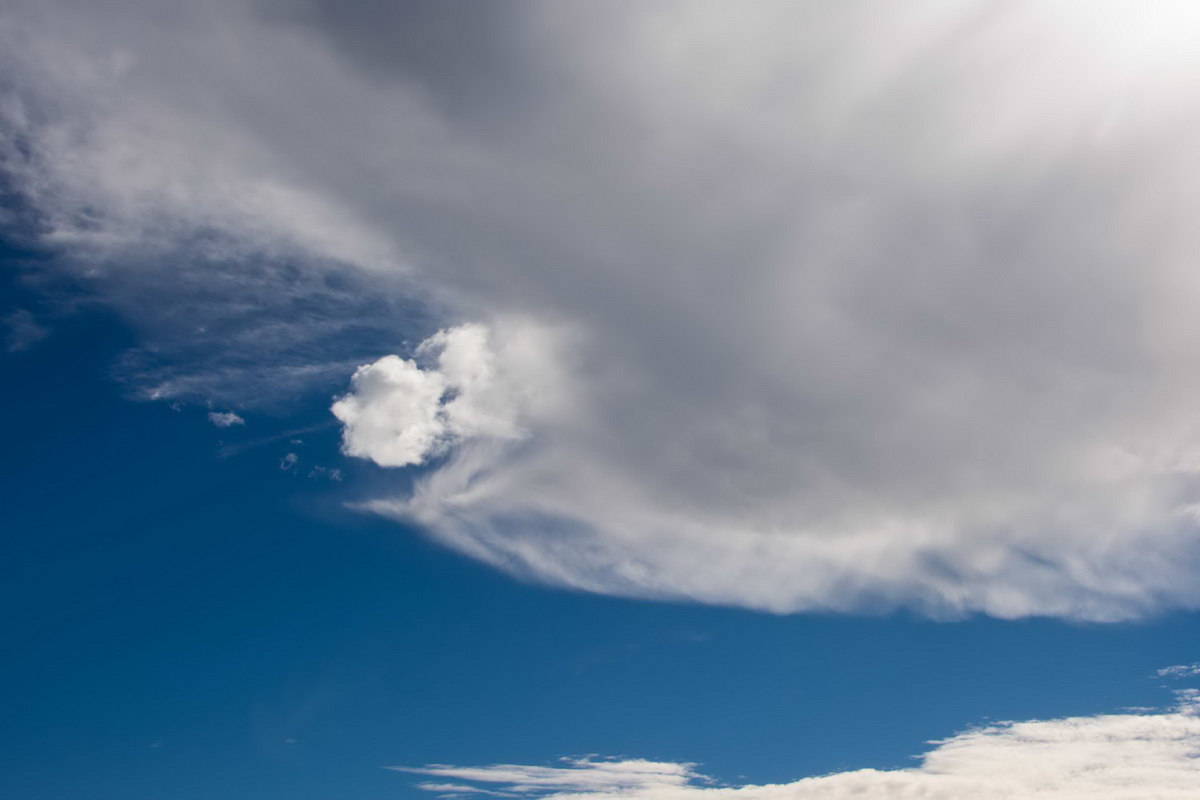 I can normally get some good pictures of the traps’ surface marker buoys, but it didn’t work out this time for the camera.  I could see the buoys, but they didn’t show up very well in the pictures.  Dang.  I’m sharing a few shots from previous years to show you what it looks like to us up in the aircraft (see one here and then also in the gallery at the end of the article). 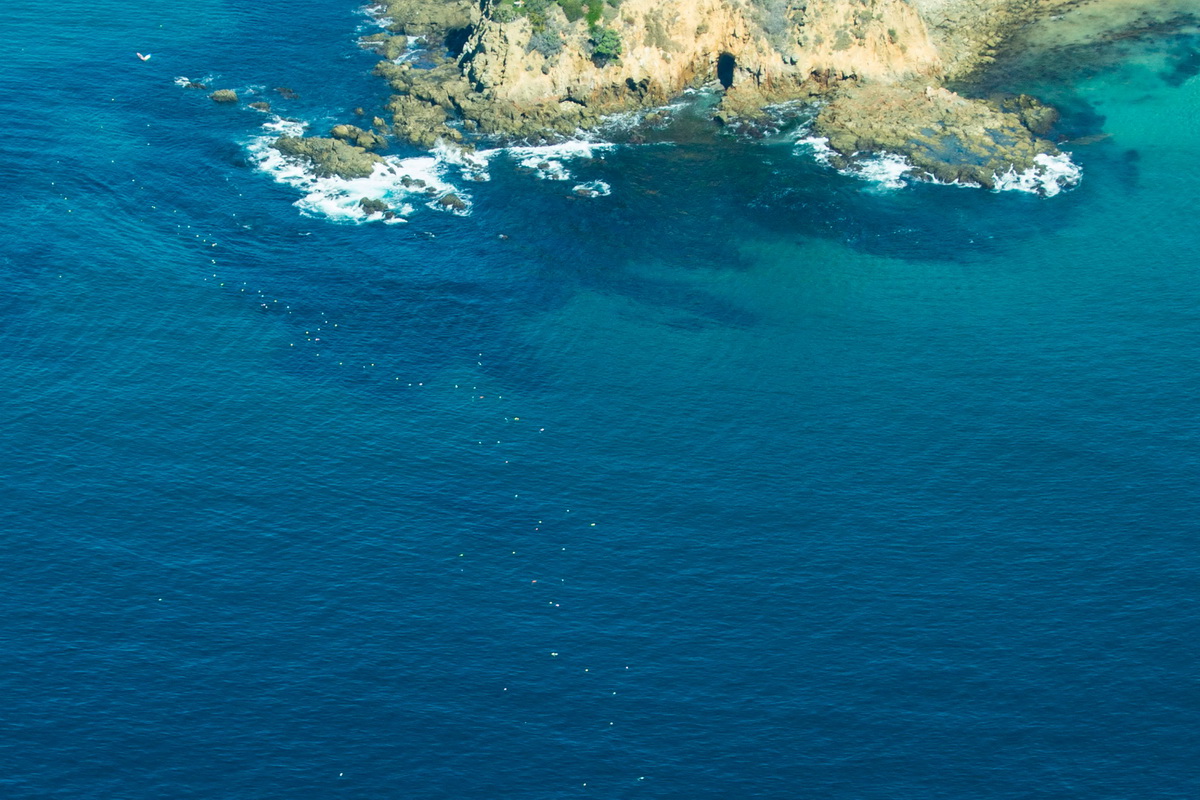 Once we flew past the Santa Barbara Harbor, where I had never flown before, I couldn’t believe what I was seeing…

Just a couple hundred yards offshore were some really thick (healthy) kelp beds.  Two of them were at least a half-mile long.

But when I looked closer, I saw hundreds, if not over a thousand, trap marker buoys.  Yikes, this is right along the route that the gray whales migrate through, twice a year. 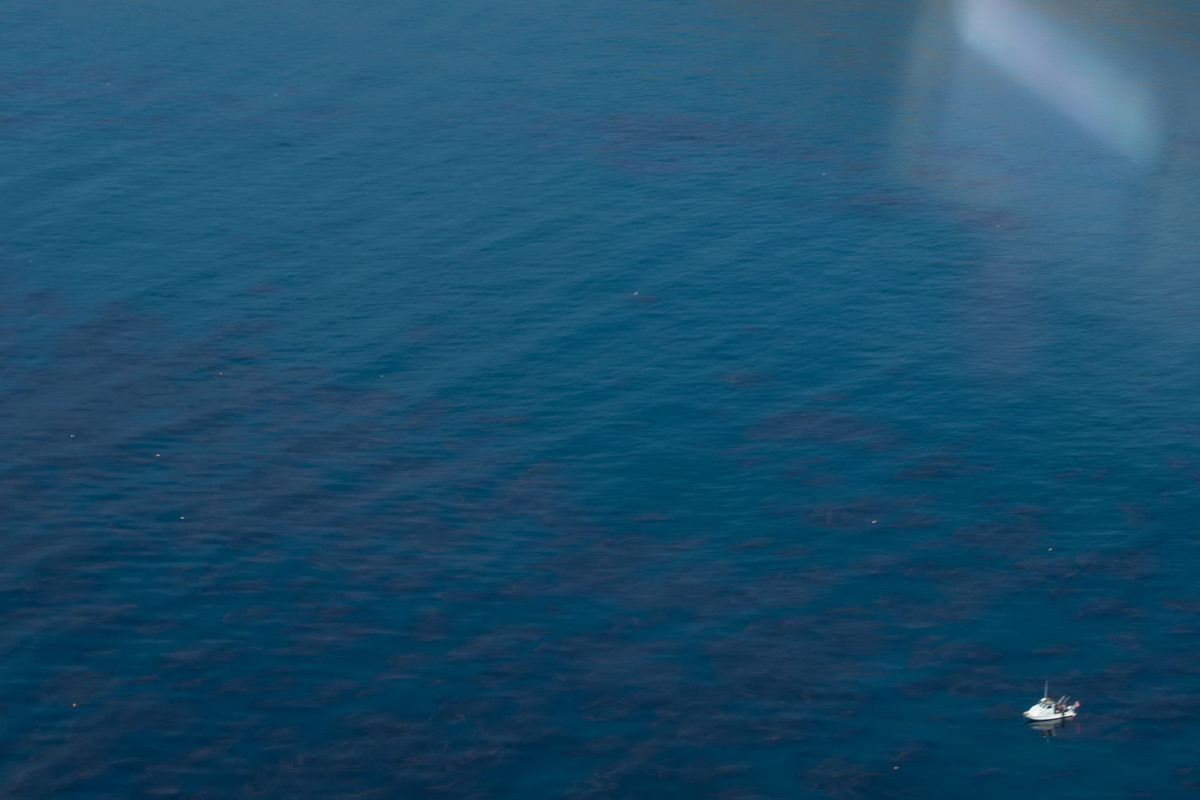 I’m planning to take one of our boats to that area and start recording the GPS numbers for those traps.

I can’t thank Wayne and LightHawk enough for taking me up in the air one more time.  Wayne’s pilot skills are absolutely amazing, and he was as interested in what we were documenting as I was.  This single flight opened up a whole new area for ODA to search for ghost gear.

I also got to see some places where we already do cleanup, like this one below -- Rincon Island. And be sure to look at the photo slide show at the end of the article. Some pretty cool shots of the coastline along the way... 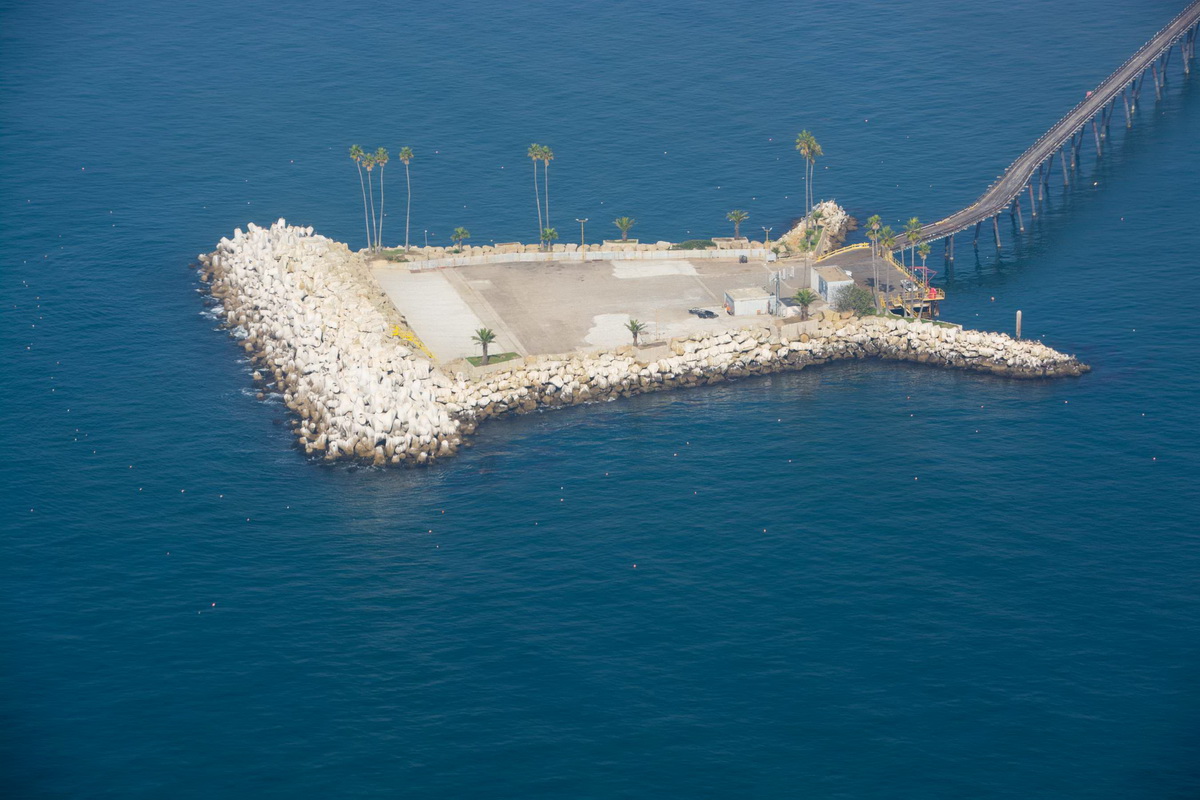 Last year we received a large donation from someone who wants to remain anonymous.  We’re incredibly grateful for this generous contribution which allowed us to buy two hi-tech devices that will make finding traps and other objects a lot easier for our volunteers.

One piece of equipment is a Side Scan Sonar (SSS).  This is my artistic attempt at showing you what the SSS looks like: 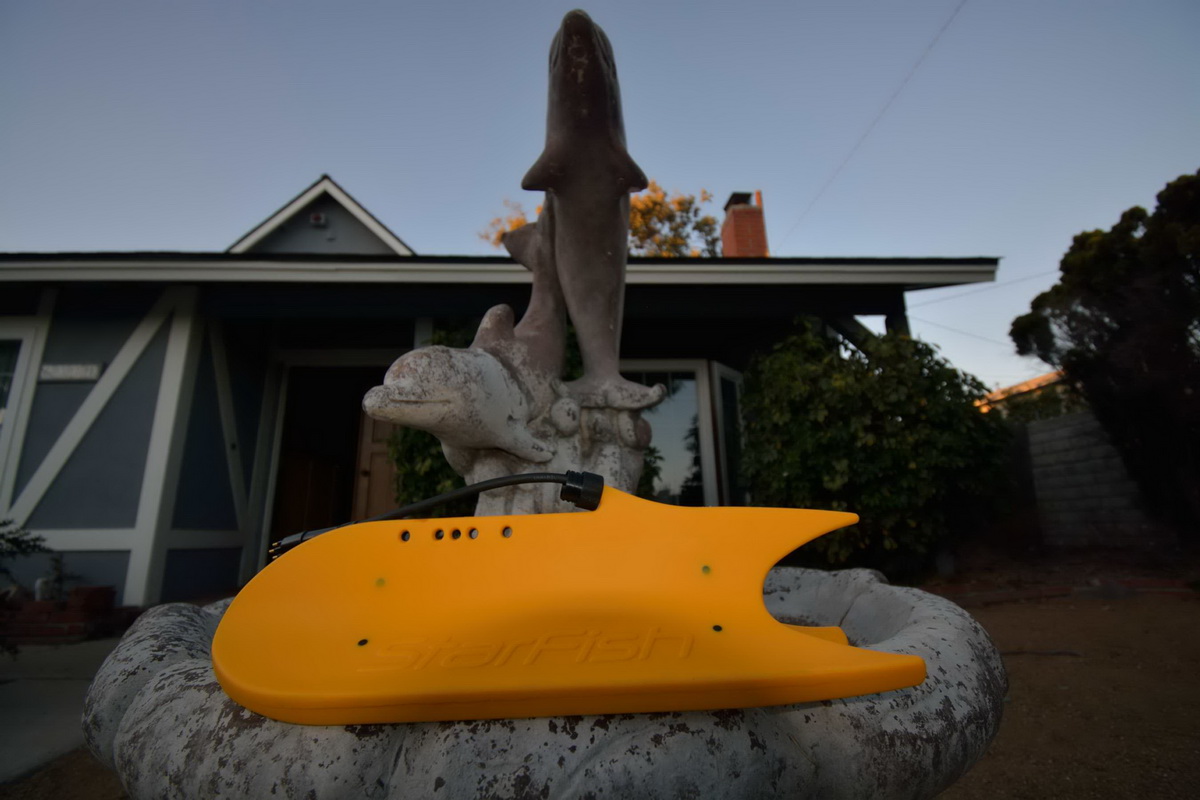 This is a device that gets towed behind the boat and sends out pulses of sound waves that can detect objects underwater – things like large boulders, shipwrecks, and other man-made objects.

We’ve been so busy with our normal operations that we haven’t had time to play with our new “toy.”  With favorable seas, we did our first open water test run of the SSS on Saturday, November 27th.

What’s nice about this device is that it doesn’t take many people to operate it:  Just two people operating it on deck and someone to handle the boat.

Long-time volunteers and Advisory Board Members Kim Cardenas and Jeff Connor joined me on our flagship Mr. Barker’s LegaSea, and we headed out to a spot just outside the Channel Islands Harbor breakwall where there are dozens of lobster traps (legally) set right now.  This is the time for commercial lobster fishing in California.

We motored about 70 feet away from the trap buoys that were at the surface.  We did a few passes by them while Jeff and Kim fine-tuned the settings on the computer, and soon they could clearly “see” the traps on the computer screen.  As you can see in this image, those little squares are actual lobster traps.  Wow!

After that success, we headed a few miles out to a sunken vessel dive site called the Kopco Star we’ve been cleaning for that last month or so.

This site is much deeper than where we had seen the lobster traps earlier.  So, we had to do some more fine-tuning before we got some satisfactory results.  But results we did get!

The large object you see here is the Kopco Star, which is about 50-feet long by 25-feet wide.  There are also a couple of traps set right next to it, which you can also see in this image.

This tool is going to make our ghost gear recovery much more efficient.  We can now go out on the boat without divers to locate hot spots where we see abandoned traps, mark those locations, and then come back another day with a dive team to remove them.

This is really a game changer for our operations here in California.

Many thanks to all our donors and volunteers who made this happen.  Things are looking up (and down)!

If you live in Ventura County and want to “get your feet wet” without really getting your feet wet, come on out with us to locate traps. Please get the process started by filling out our Crew Application.