No, I’m not talking about my love life…  I’m referring to a sunken boat wreck, one we’ve been diving on for the last two months – the Kopco Star. 😉

It rests in 80 feet of water and is four miles from the nearest land.  This wreck site has a lot of nooks and crannies for critters to hide in, and fishermen of all kinds are aware of that and drop their traps and hooks near it, constantly. 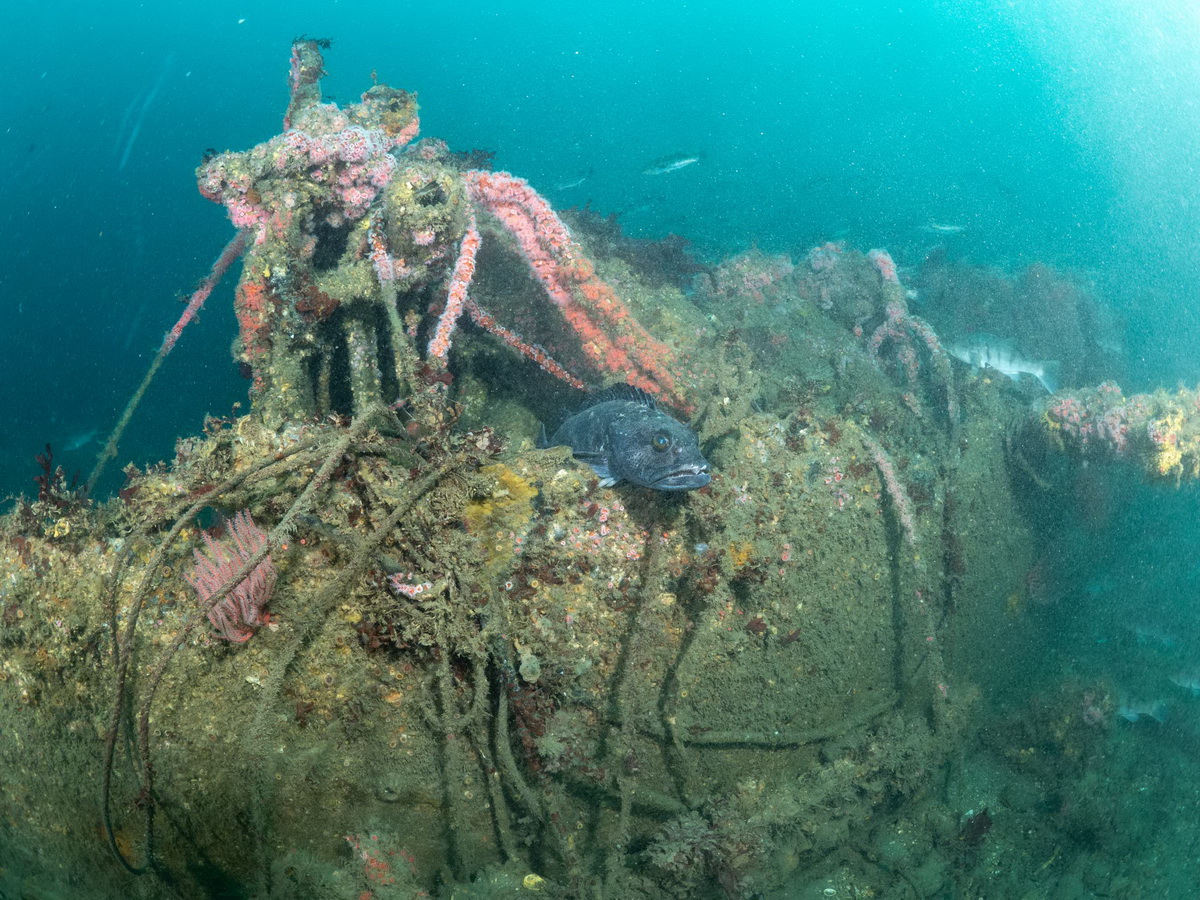 The wreck is littered with fishing debris of all types: abandoned lobster traps, remnants of broken traps, trap lines, fishing lines, and lures.

On Sunday, December 5th, a crew of ODA volunteers headed out of Channel Islands Harbor under “iffy” conditions.  This was a day for what are known as “king tides.”  Normally there is only a three-to-four-foot swing between the high and low tide. But on this day the tides increased to seven feet!

That meant a LOT of water was being pushed around during that six-hour period between the high and low tide.  That usually portends to bad diving conditions.  But we gave it a whirl anyway. 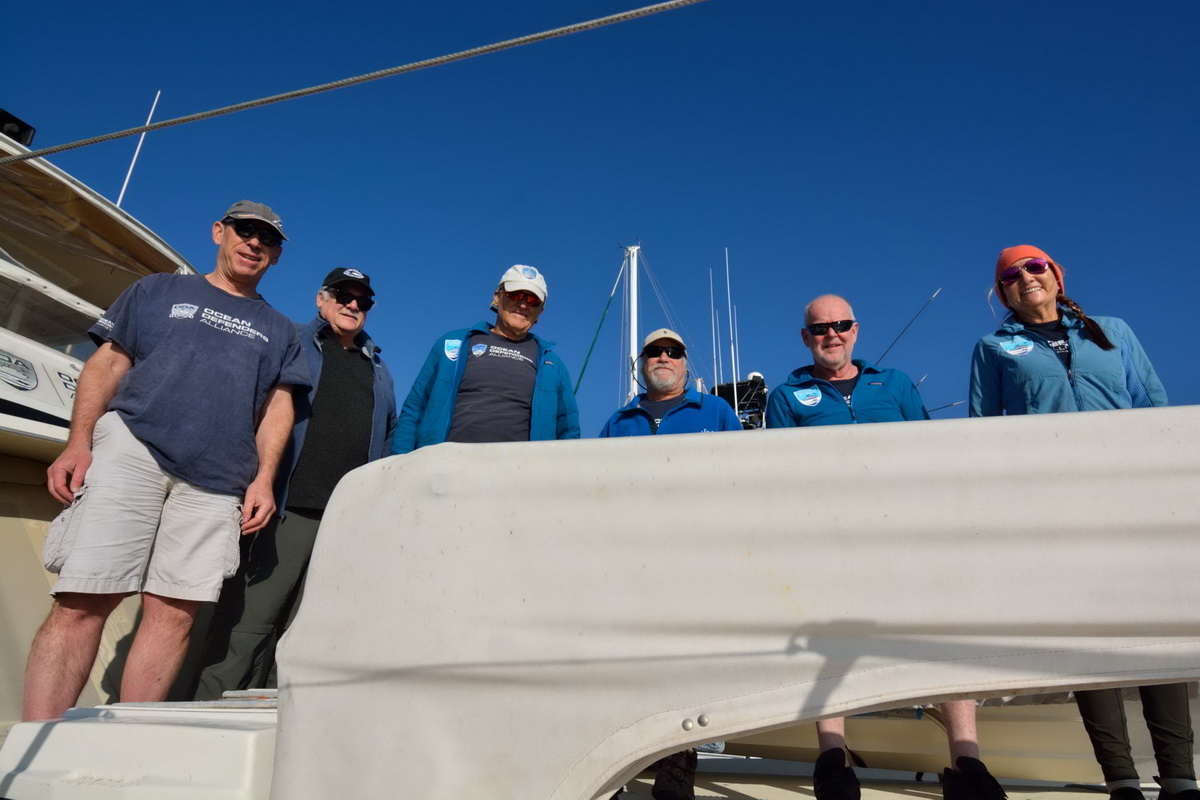 King Crew for a King Tide

The dive team this day consisted of: Kim Cardenas, Erich Fertschneider, Geoff Walsh, and Mike Wynd.  Filling out the crew onboard were Jeff Connor, Dave Merrill, and myself. 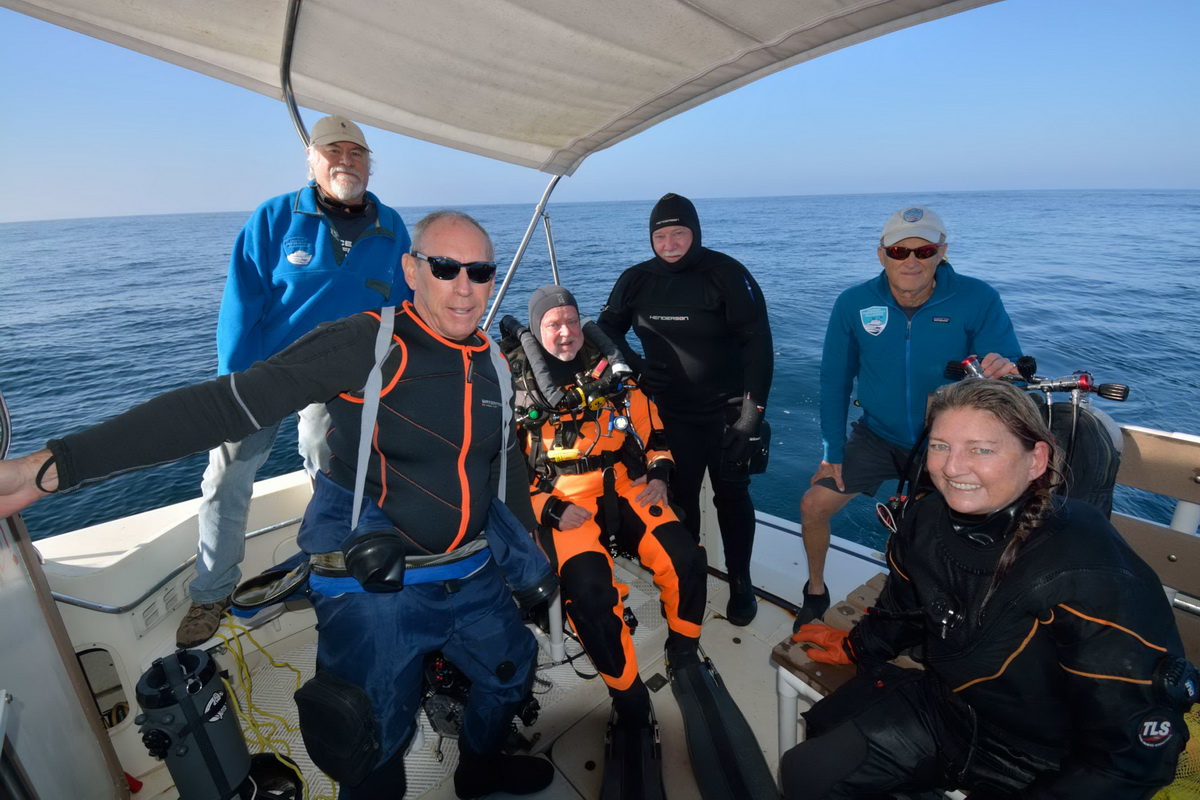 As the divers were getting into their dive gear, we couldn’t help but notice a strong current blowing by our boat.  So, we threw out a drift line behind the boat that divers could grab onto, in case they couldn’t overcome the current and potentially drift away.

Mike Wynd – who has tanks that last longer – was the first to jump in, with Kim, Erich and Geoff heading down about 15 minutes later. 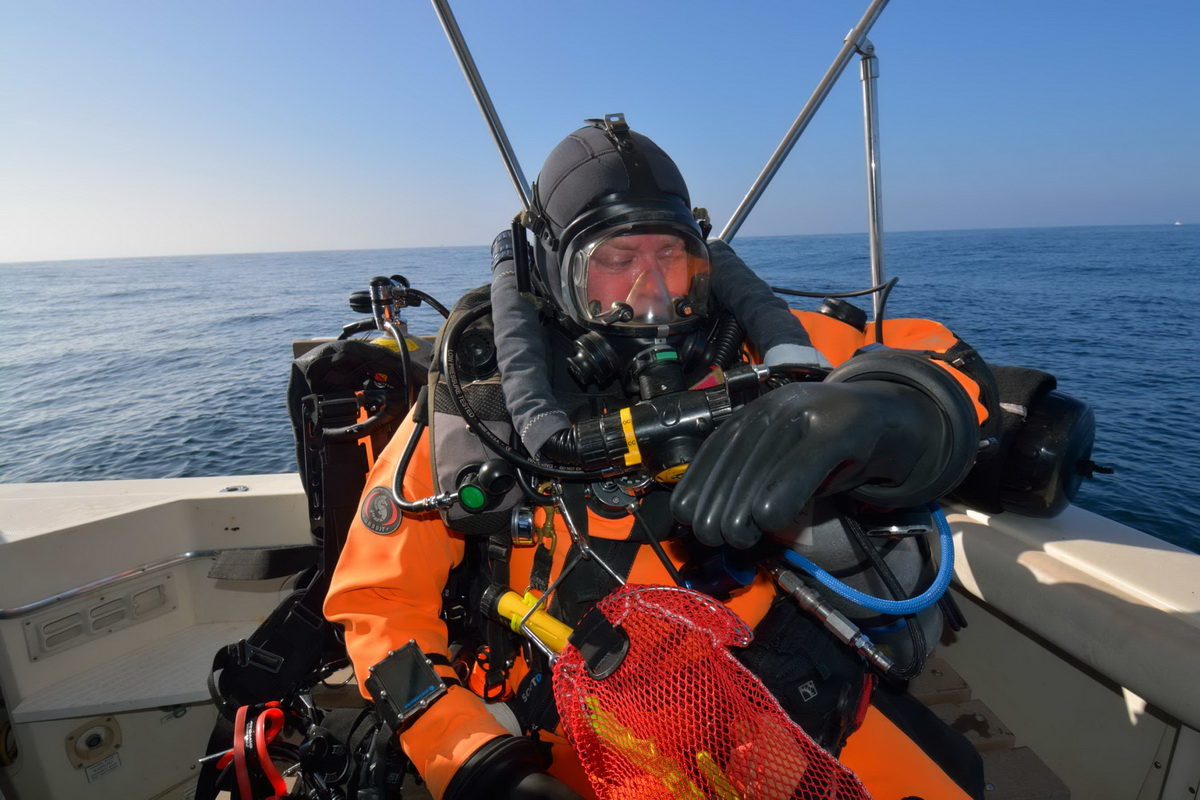 We had scoped this site out before and knew there were some significant beams laying on top of a trap, so we wanted Mike to get a head start in order to evaluate the situation and start clearing some debris.

It worked out great! 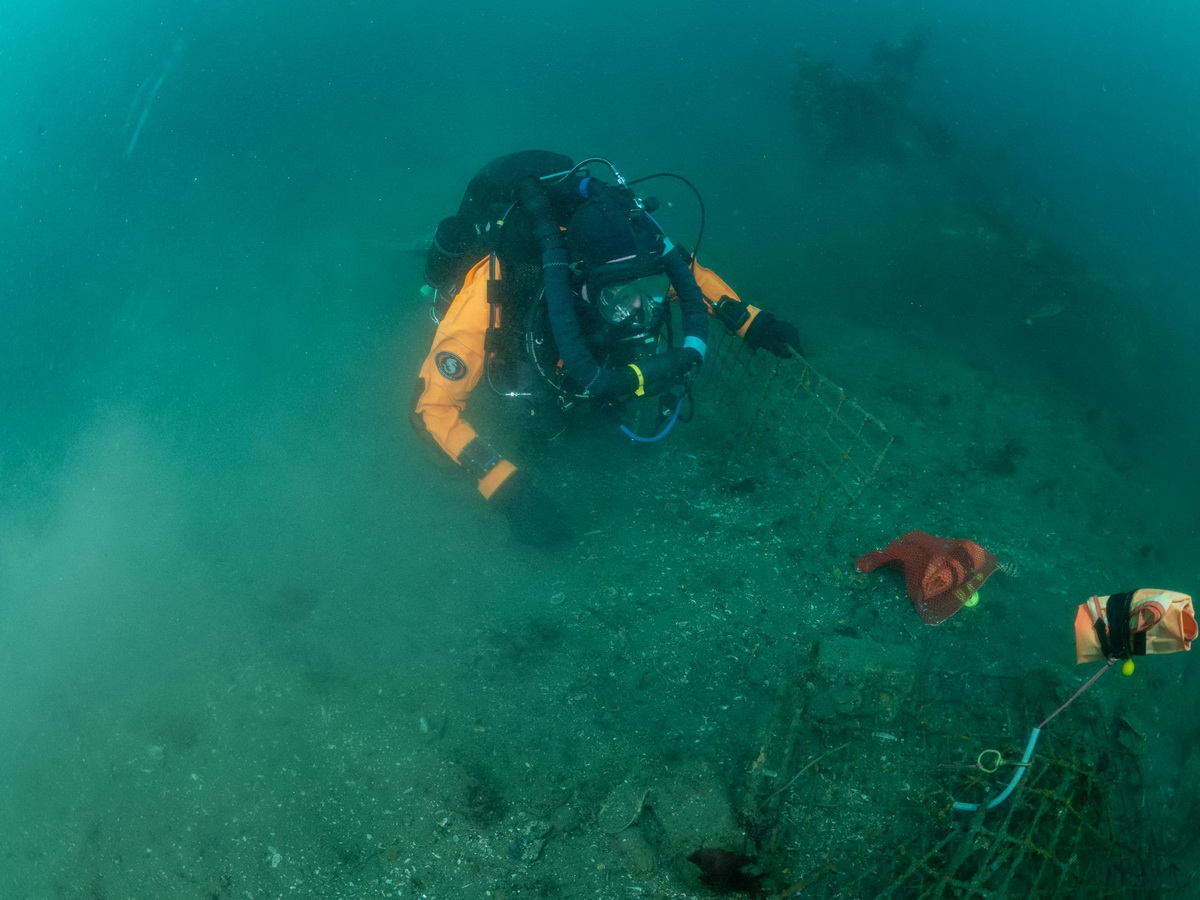 Just as he got the trap freed from the pile on top of it, the other divers showed up and started attaching lift bags to it.  Soon it was on its way to the surface.  Erich did his usual outstanding job of getting some great pictures and video of the scene.

A few minutes later we saw another lift bag pop up. 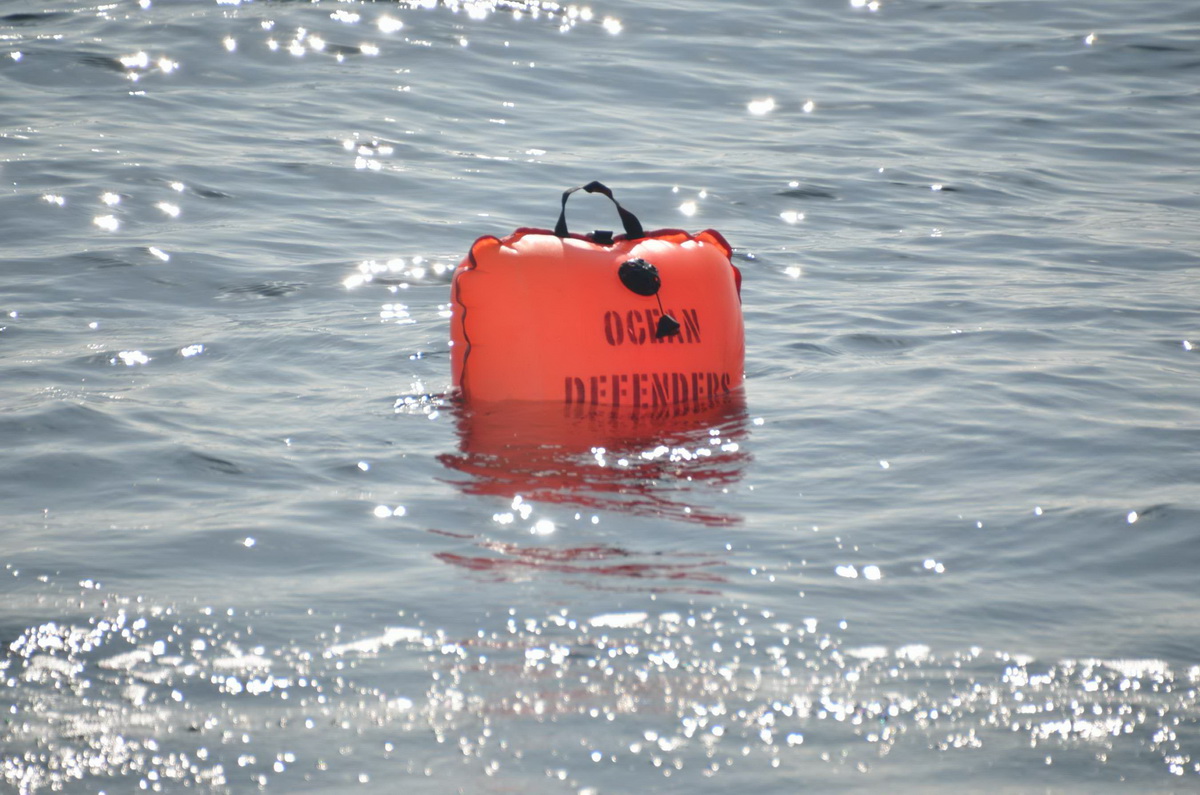 After about 30 minutes all the divers surfaced and climbed back aboard the boat.  The first words out of Geoff’s mouth were “best visibility of the year!”

Wow, after an entire year of having five-fifteen-foot underwater visibility, it was great to hear things had improved.  Then he said it was something like 50 feet!  Yowzer, we almost never get that clear water here in California.

Turns out the current was just as strong on the bottom as it was on the surface, but because everyone had a scooter, they were still able to make headway and get a lot of work done.

As soon as the divers were out of their gear, we motored the boat to where the lift bags were, about a half mile away.  I pulled the boat up alongside one of the lift bags and Erich jumped in the water to attach the hoist line from the davit (crane) so we could haul it aboard. 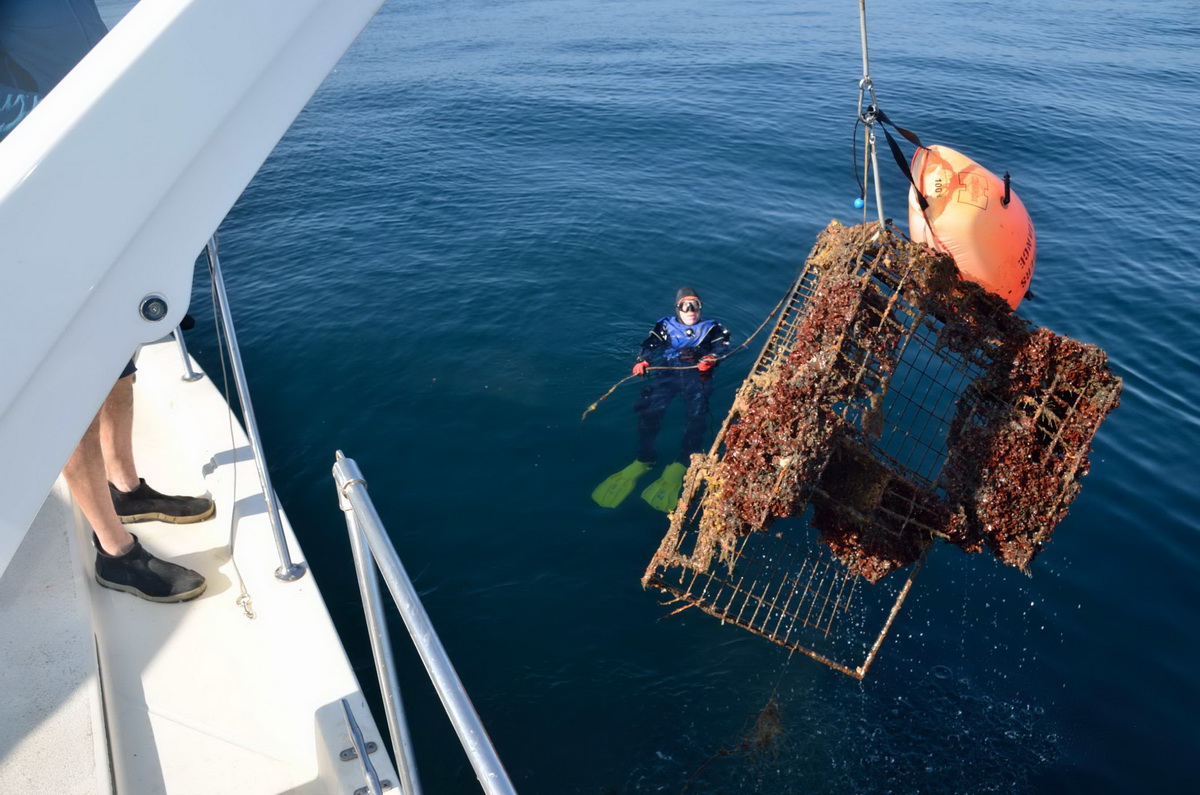 After we had it secured on the front deck, we pulled up to the second bag and repeated the process. 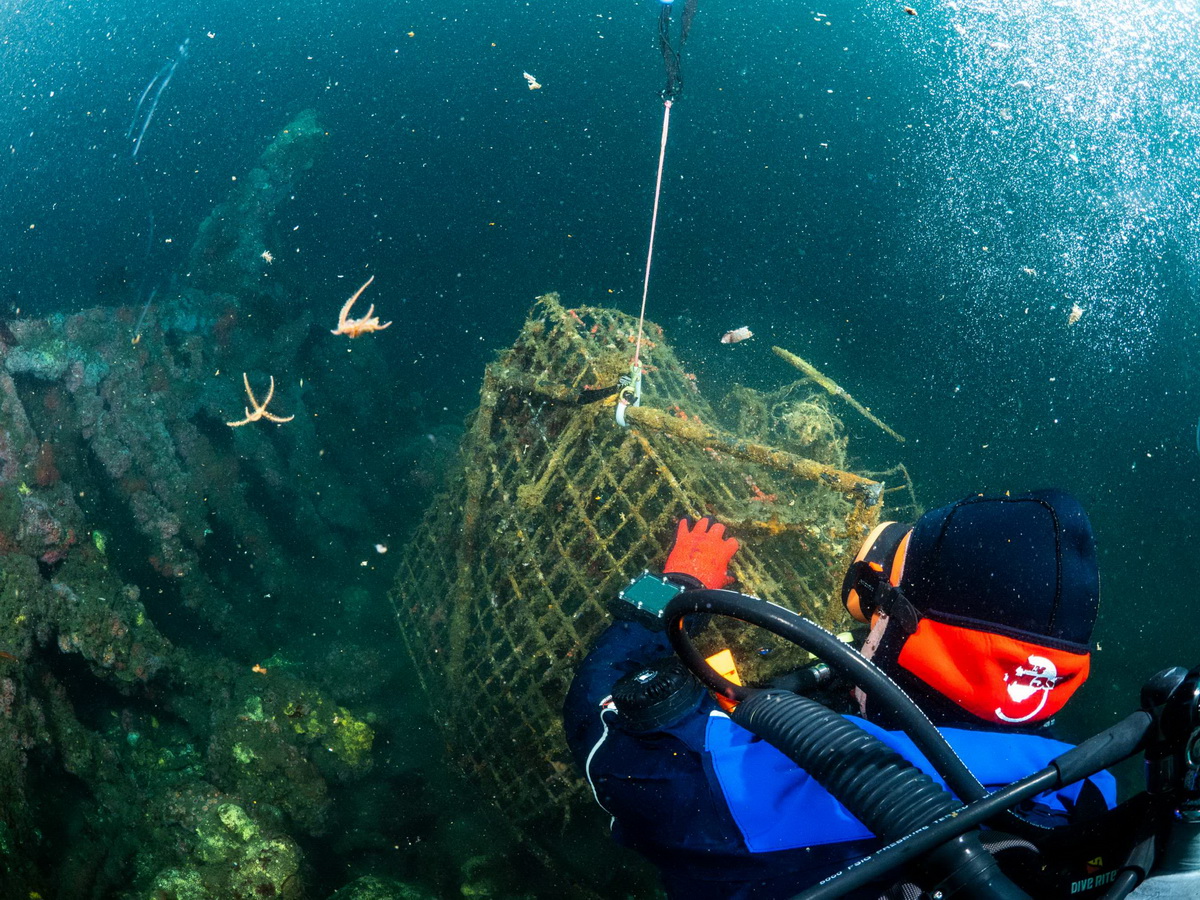 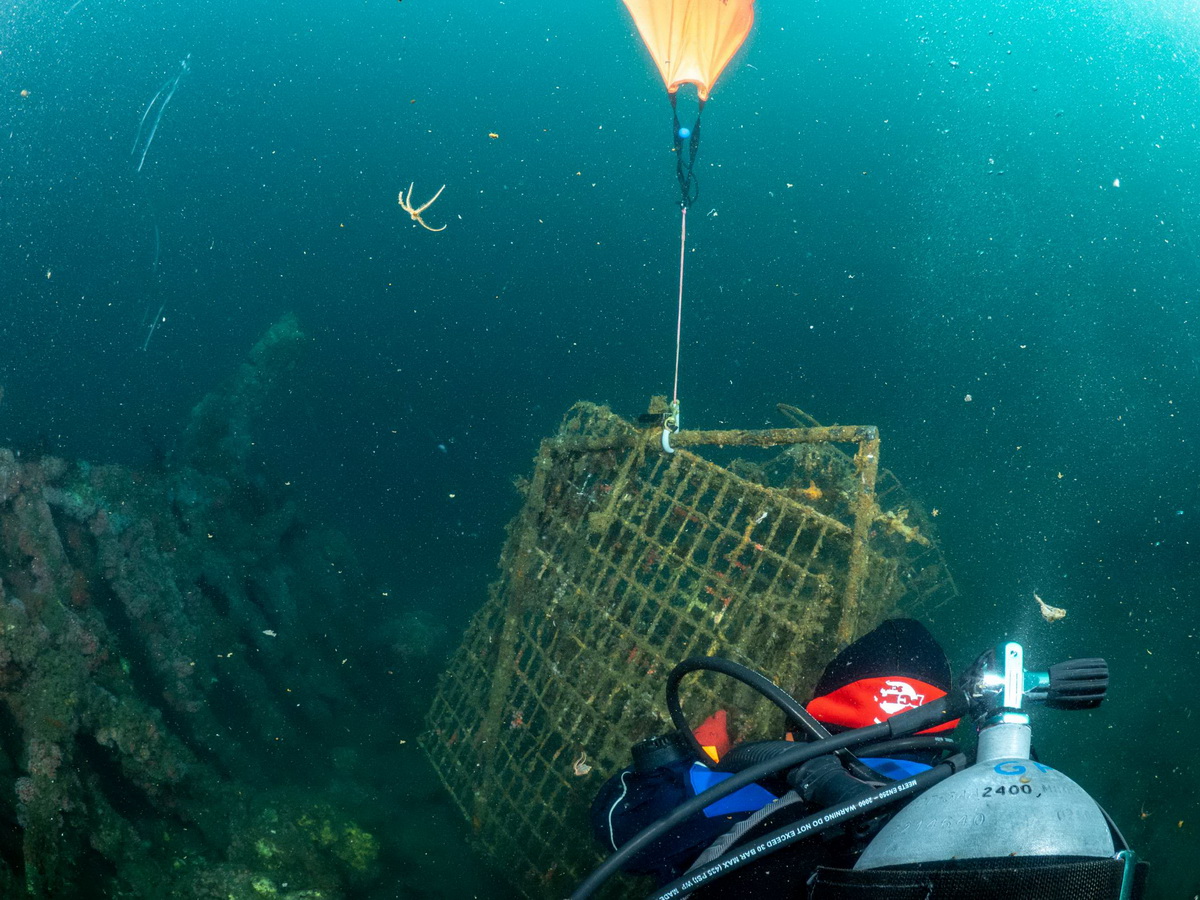 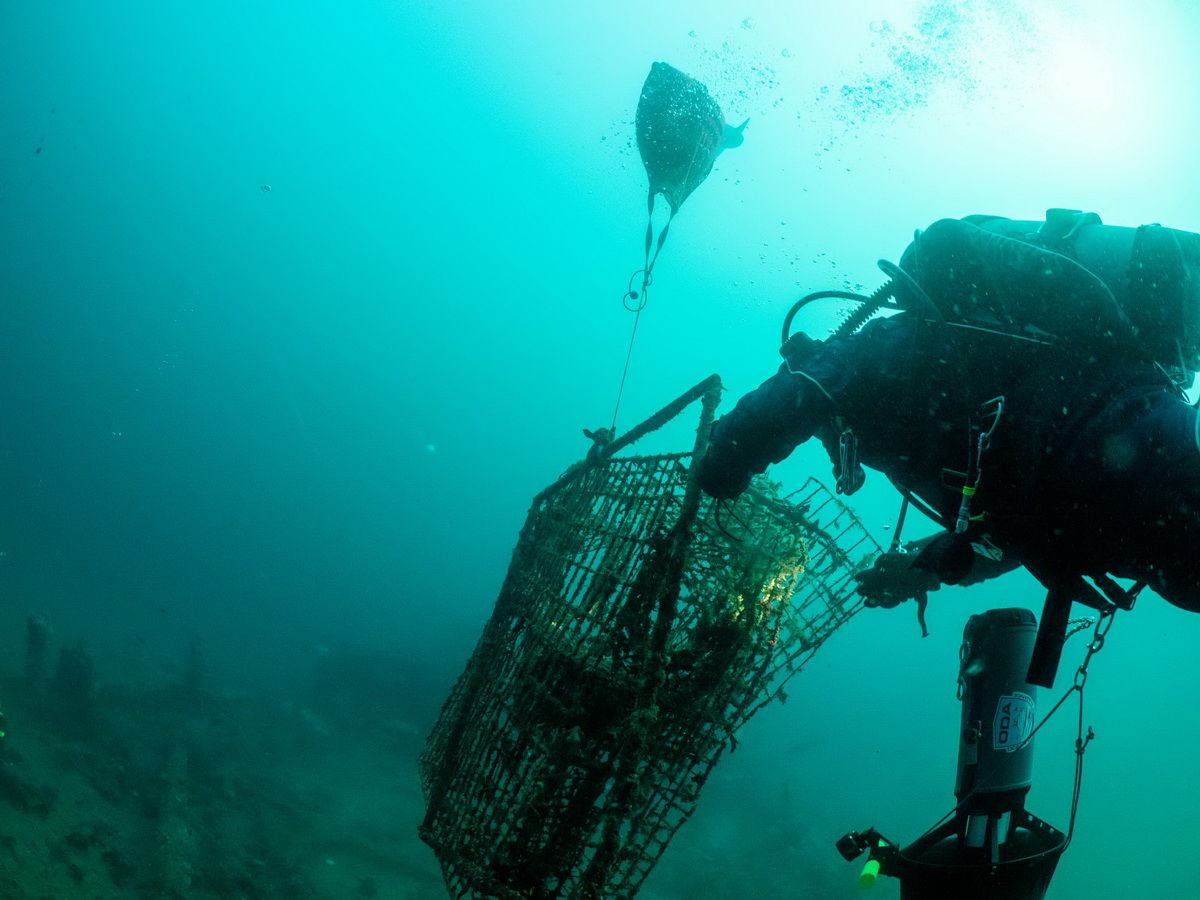 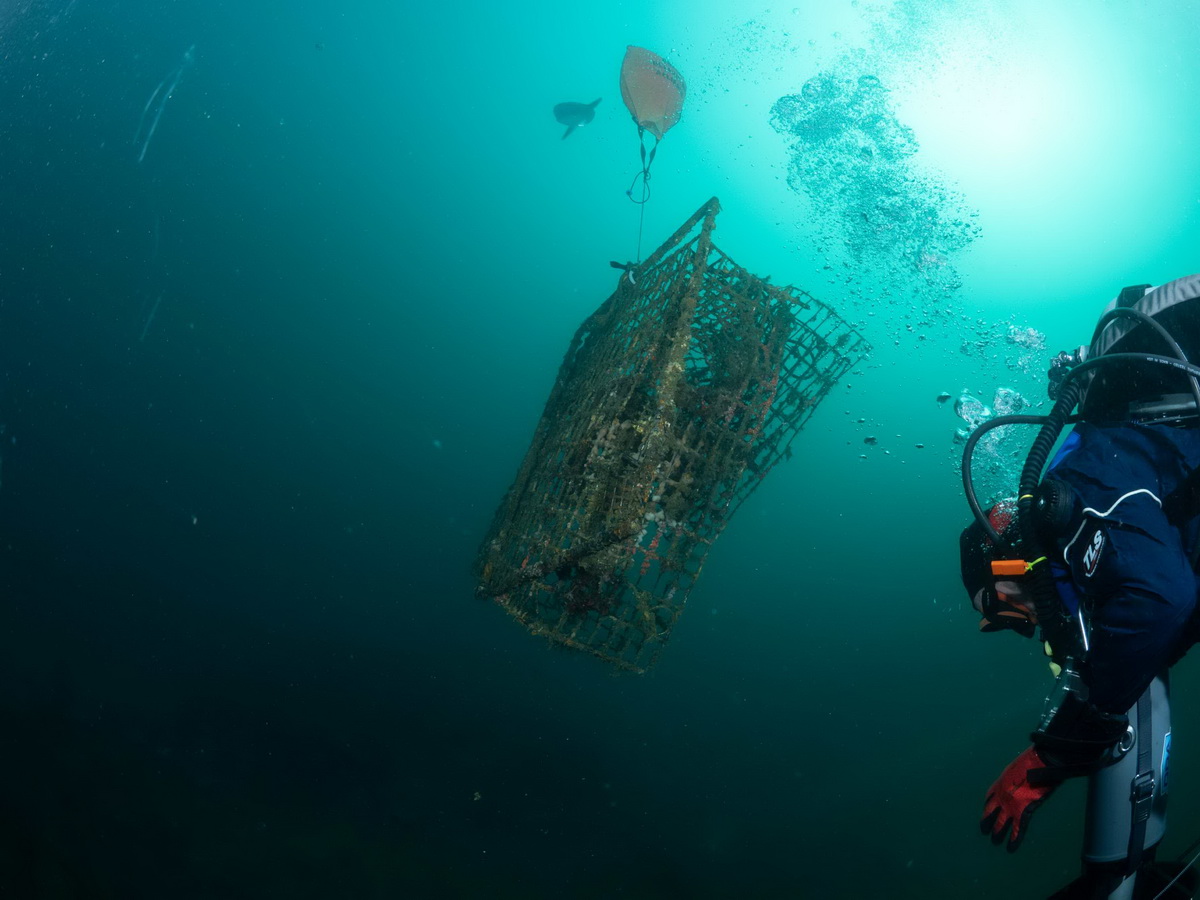 As the divers took a break, Jeff, Dave and I dropped the anchor back on the wreck and talked about what the divers had seen on their epic dive.

It turned out that Mike and Geoff had cameras with them as well and got video footage of the wreck.

Ninety minutes after they surfaced, Erich, Geoff and Mike went diving again.  Kim didn’t go because her dry suit was leaking, and she was soaked to the bone.

Mike took the lead once more, with Erich and Geoff 15 minutes behind him. Sure enough they trapped another trap! This time Kim got to help hoist it aboard. 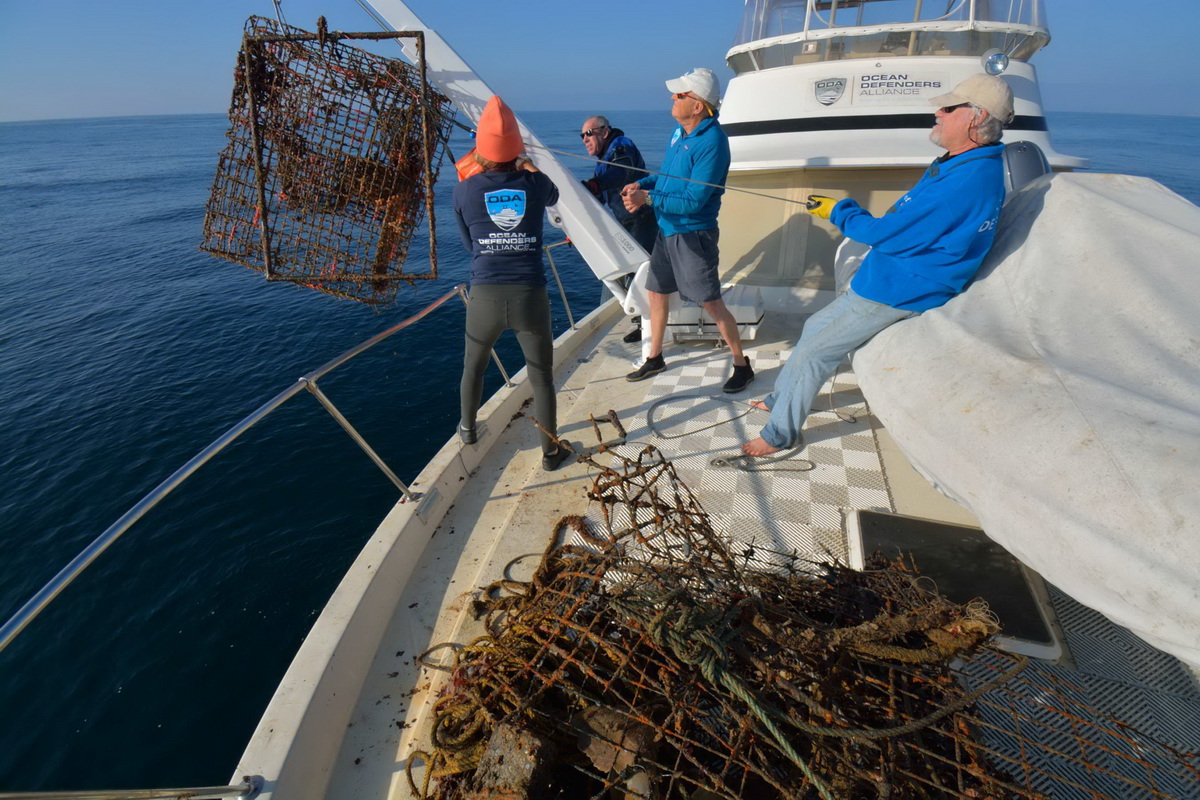 By now the current had really died down and after the dive team sent one more trap to the surface, they took time out to enjoy the wreck and film the sights.

They came back with some great images.  Lots and lots of fish schooling around. Be sure to check out the photo gallery below for several colorful underwater photos of the growths on the wreck! 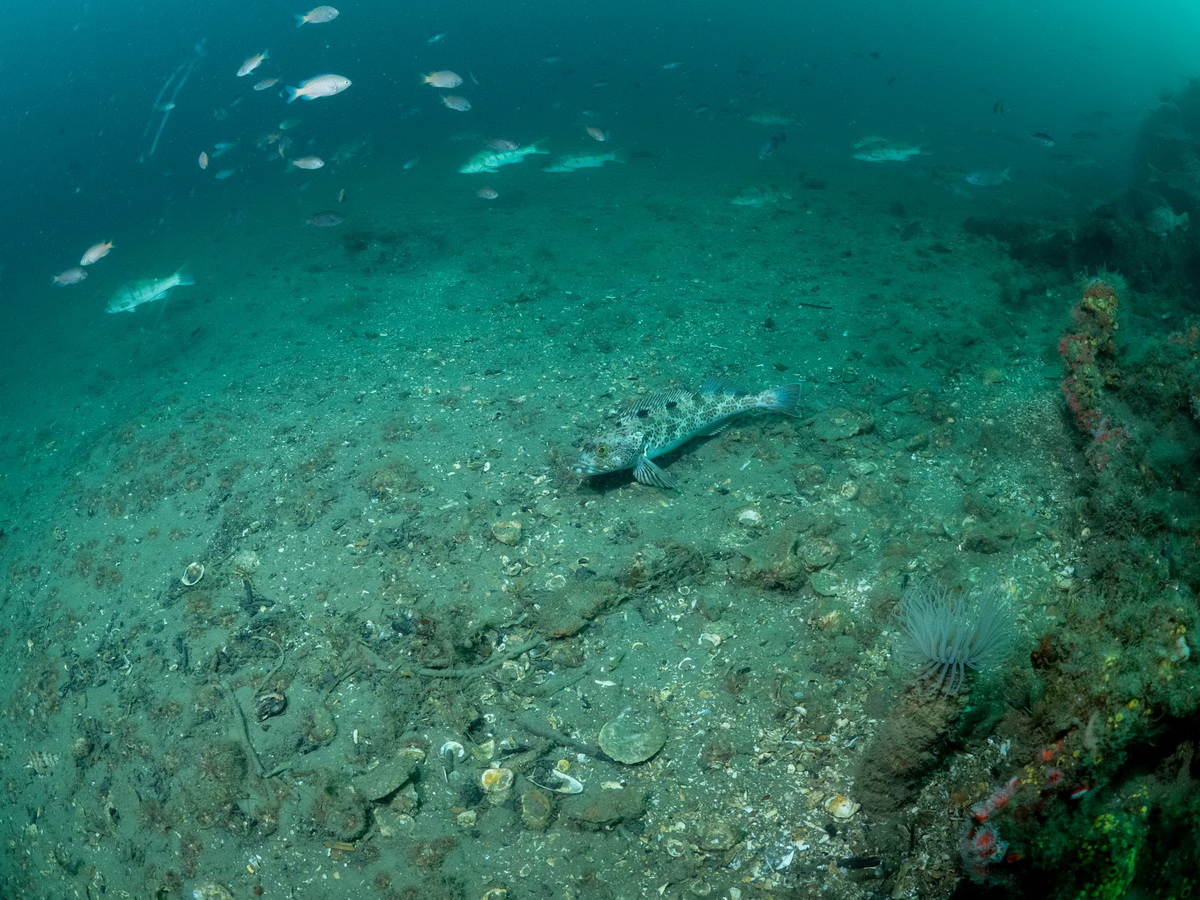 They even saw a huge male sheepshead, about three feet long.  What is so unusual about that is the fishermen usually catch and kill them before they have a chance to get that large.  They were so awed by the animal that they forgot to get any images of him…

We did, however, remember to get a photo of the day's haul! Three traps no longer down there; 250 feet of trap line and 200 feet of fishing line gone as well. 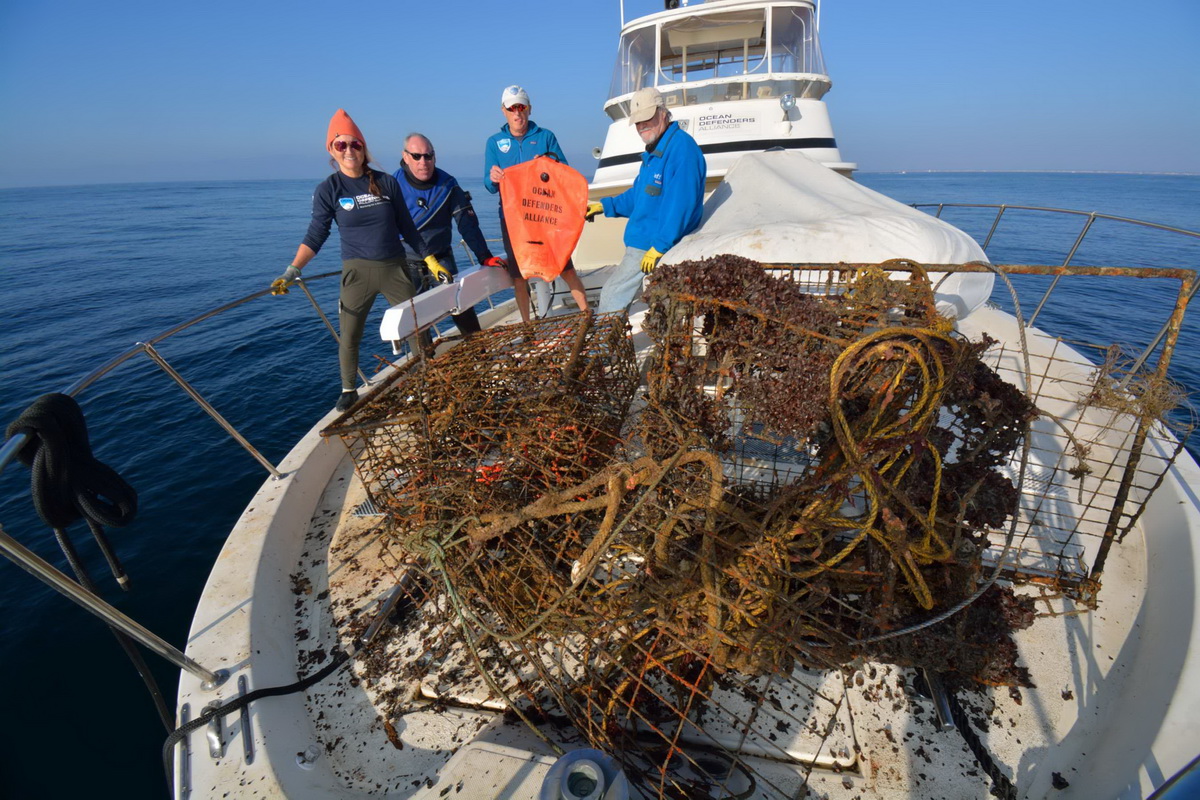 We headed back to the harbor and spent about two hours cleaning the boat.  What a lovely mess it was!

As we were departing Mike said he was going to put together a video to share with us.  Can’t wait to see it!  Until then, enjoy the underwater pictures that Erich took.

Happy Holidays everyone!  Peace to all beings!!