Will the Whales of the Pacific Ever Get to Breathe a Sigh of Relief?

This morning as I was getting ready to address the commissioners on the California Fish and Game Commission (F&GC)via a Zoom conference call, I read an article that, just yesterday, three humpback whales had become entangled in fishing gear near Vancouver Island, Canada.  Three whales in ONE DAY!

As you know, whale entanglements are what ODA volunteers work so tirelessly to prevent.  We’ve gathered a lot of information over our 20-year history that we put out to the public, about how dire the situation is and where we feel these entanglements are most likely to happen. 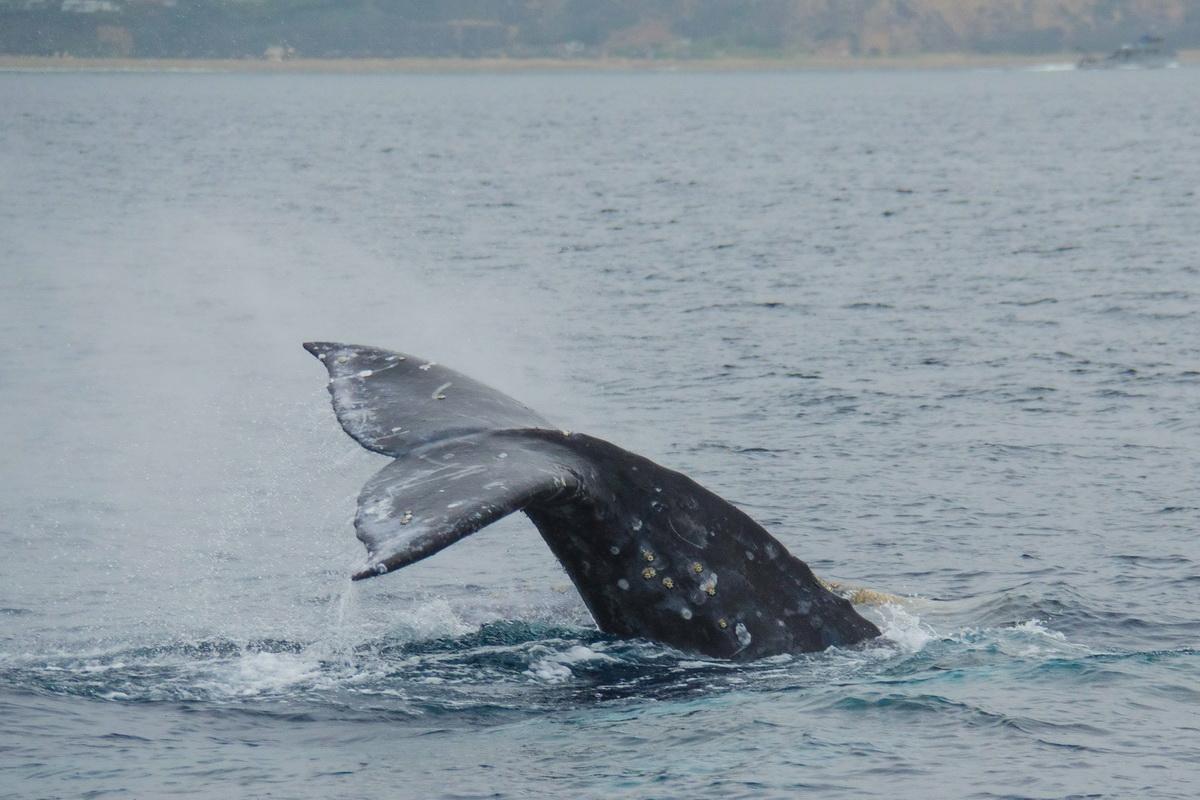 Loaded with all this information, I put together a 3-minute video that attempted to show the commissioners what the whales are up against here in Southern California.  Hard to encapsulate it all in three minutes, but that is all the time any of the presenters were allowed.

A fellow activist named Penny Elias had contacted me about two months ago about collaborating with ODA to try to get the F&GC to do something about all the traps that get set right on the borders of the Marine Protected Areas (MPA’s) throughout the state.

Penny has decades of experience dealing with the appropriate governmental agencies that are in charge of maintaining the health of our wildlife and ecosystems.  As just one example, she was heavily involved with stopping the toll road in south Orange County from extending into San Clemente.

Since I have very little experience in dealing with these agencies but lots of knowledge about trap locations and whale entanglements, I thought Penny and I would be a great match.

Penny was on the phone and all over the internet finding out where to start with our proposal: to stop the setting of so many traps right where the whales migrate.

Once she had that nailed down, I started focusing on how best to make an impactful video presentation.

Lots of people stepped up to the plate!

There are so many people who helped here that it’s going to be hard to call out everybody, but let me try…

Documentation from the Air

Chris Aultman is a helicopter pilot, and back in 2010 he started taking me up in the air so we could try to find hot spots where there were a lot of traps set in a small area.  We flew from San Diego to Santa Monica Bay several times over the years.  ODA is thankful for all those flights, and we miss Chris as he moved away from California somewhere around 2014. Here is Chris on the far left -- you can see he also is a diver! 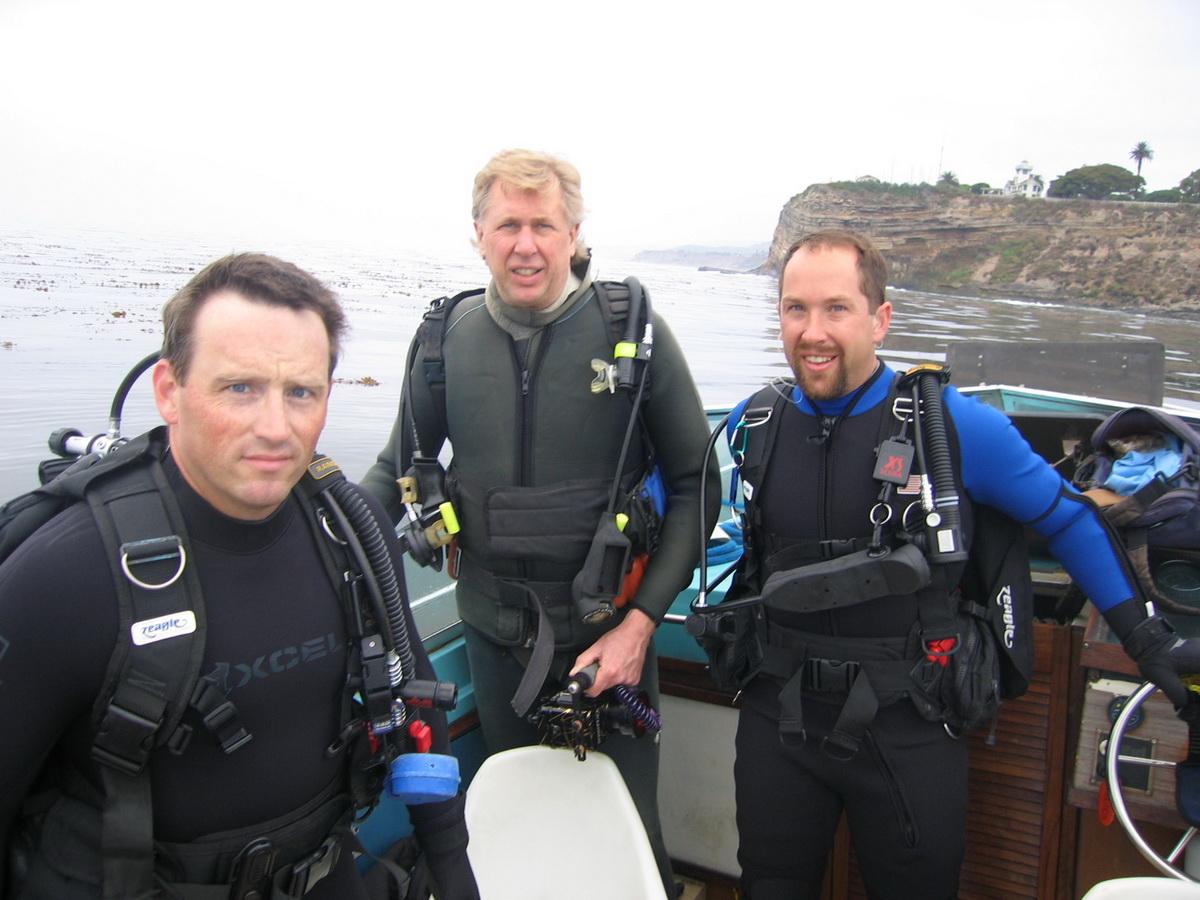 Then I found out about a group called Lighthawk, who has a roster of airplane pilots who are willing to donate their time and planes to fly researchers and nonprofits to areas that can best be observed from the air.  I’ve had six or seven flights with them and they allow us to keep on top of when and where these traps are set. 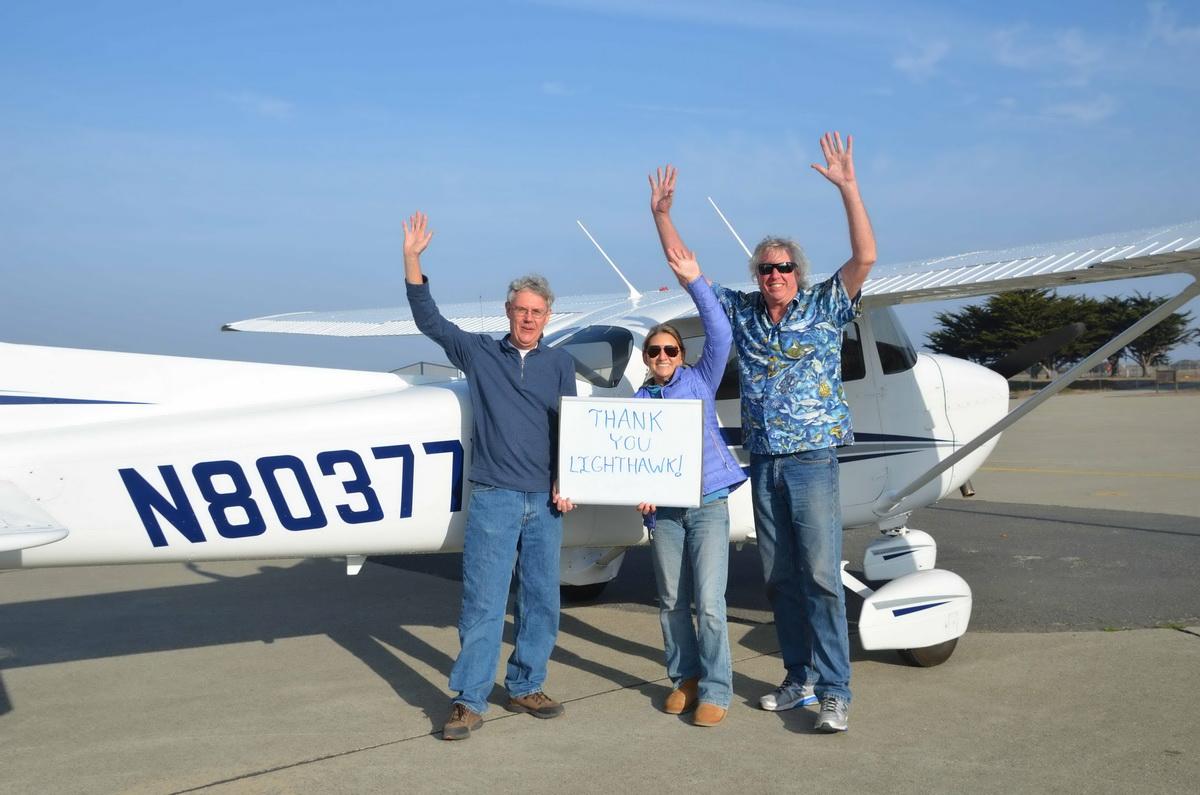 Mind you, the fishermen move their traps around all the time.  When one spot is fished out, they move the traps to another location.

Documentation from the Water

Next, we would go out with our boat to those areas, find the trap markers (buoys), get as close as we could without getting the trap lines entangled in the boat propellers, and get the GPS numbers for each buoy. ODA volunteers Jeff Connor, Kim Cardenas, Lisa Davis, Steve Fairbanks, Al Laubenstein, Jim Lieber, and Bob Walls have all gone out of their way to help us get those numbers. 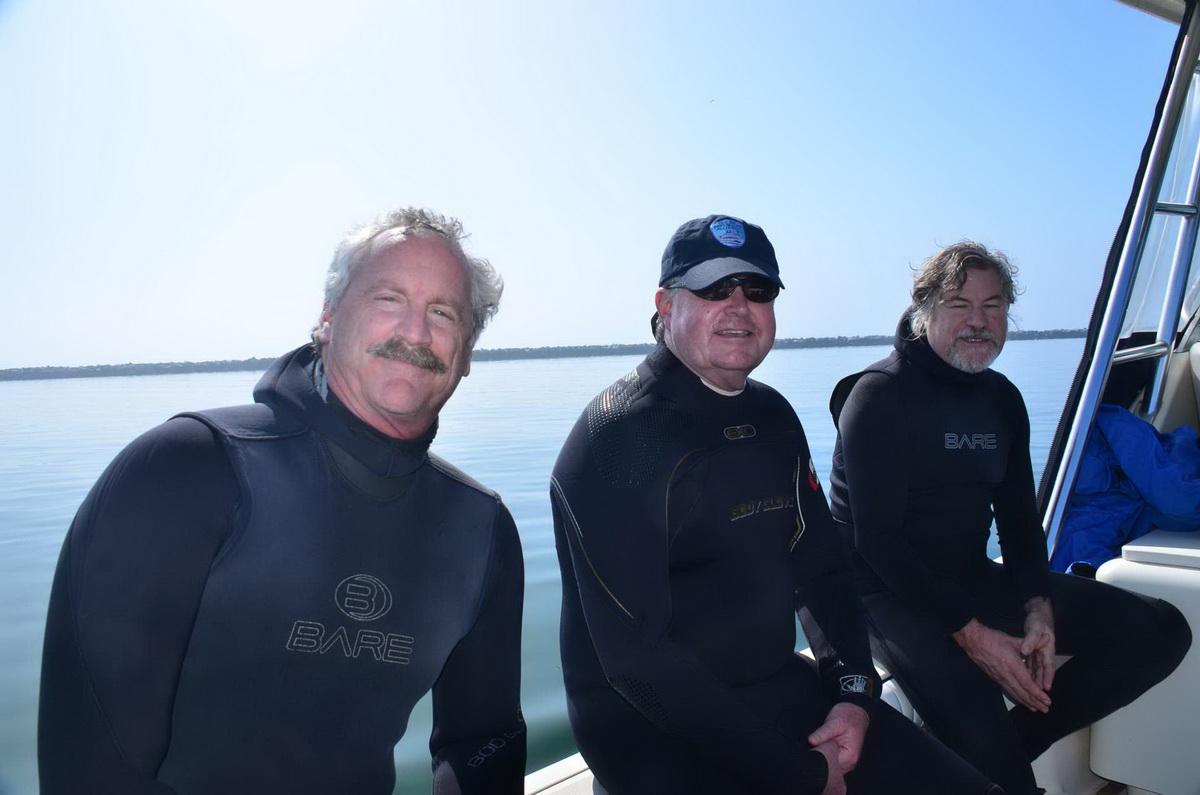 Additionally, volunteers Chris Bell and Jeff Connor helped me get those GPS locations overlaid onto a map.  I’ve used these maps in my presentations for years, and it really helps get the point across to people who will never get to see it like the ODA crew does.

Sprucing Up Our Visual Aids

While these maps have been really helpful, they were lacking in the pizzazz department.   I contacted Marnie Gaede who is a teacher at the ArtCenter College of Design, in Pasadena, CA, knowing that they have some great, enthusiastic, graphic artists there.  Marnie put me in touch with Abigal Ohab, who is a student at the college. 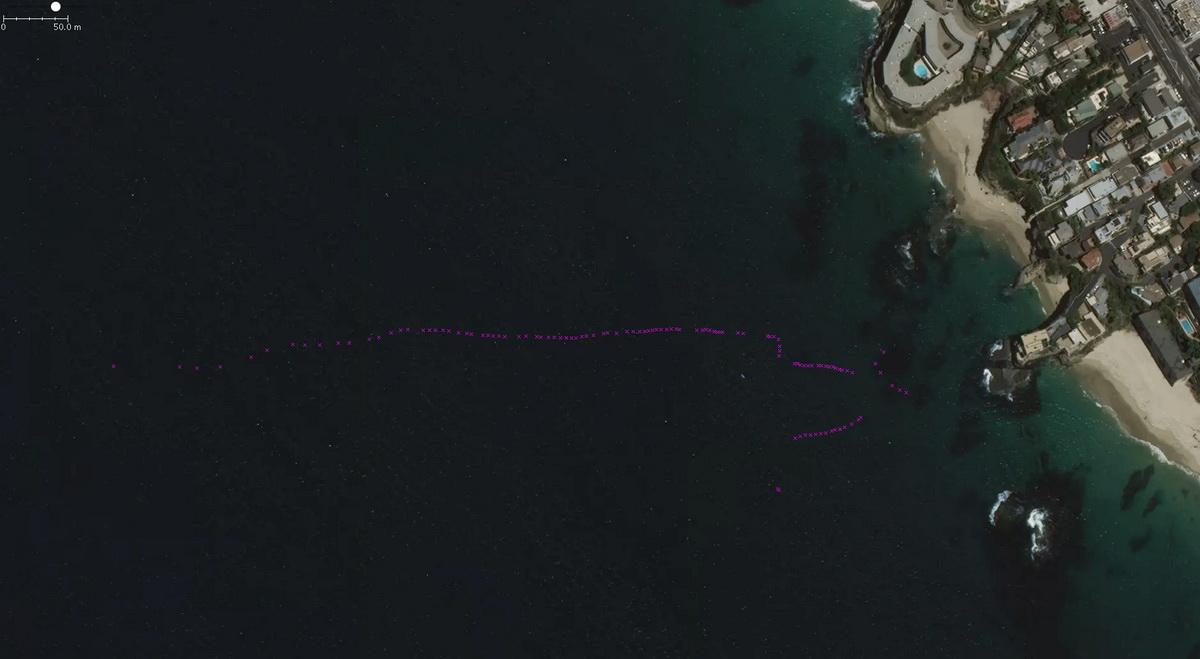 Abby volunteered to come up with some more compelling map images for us.  These maps are proving to be invaluable. 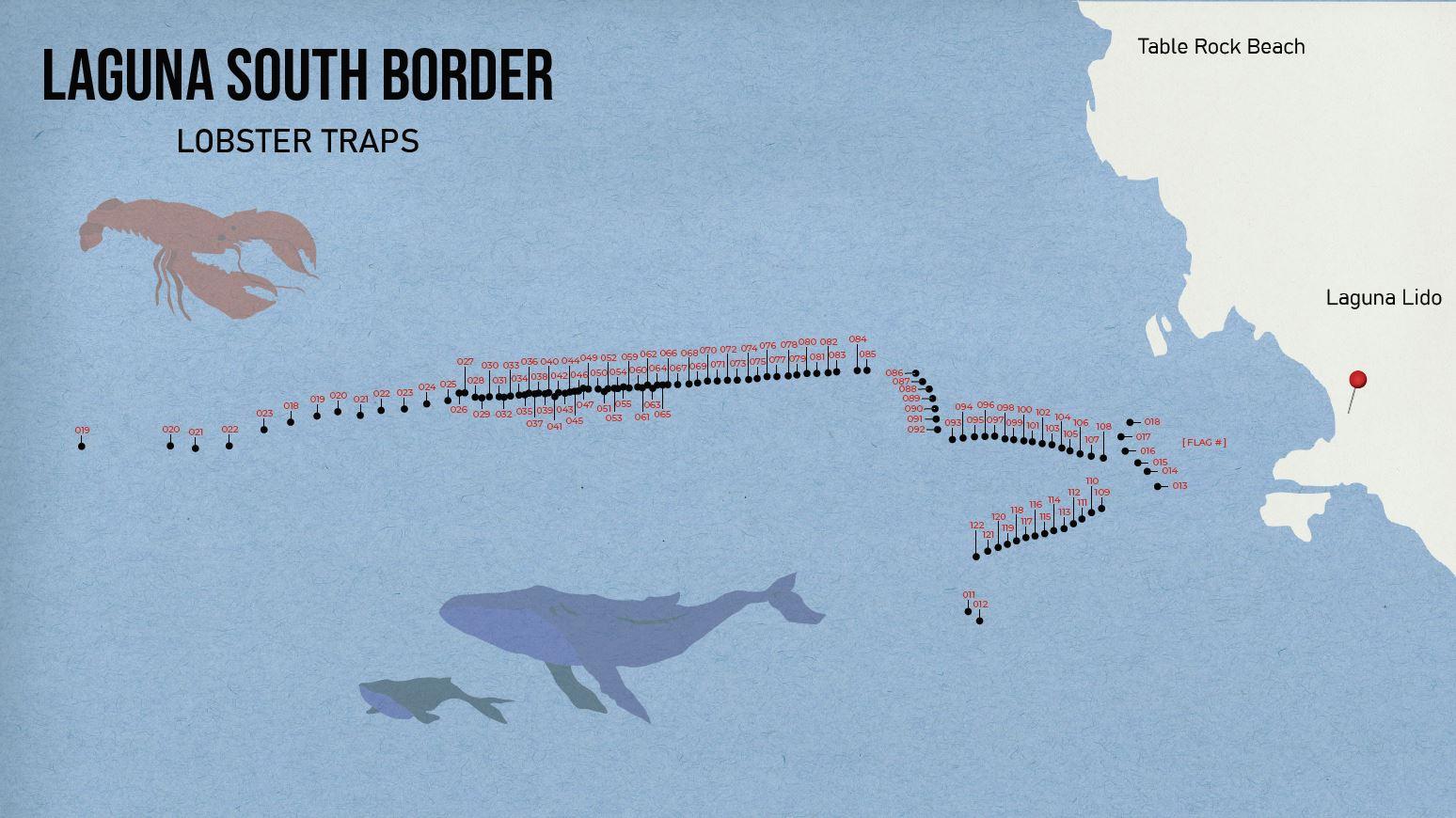 Back in 2017, we really started putting a lot of effort in to coming up with different visual images that would help tell the story.  Walter Marti flew his drone over the southern boundary of the Laguna Beach MPA.  Then several people went with Walter to help him film what a line of traps look like underwater.  ODA volunteer divers Bill Maley, Dan Eisenbeisz, Jim McKeeman, and Linda Blanchard all helped with this phase.

Long-time volunteer John Milligan continues to help behind the scenes.  John has put in hours and hours of work keeping my video editing computer maintained and current with all the updates. 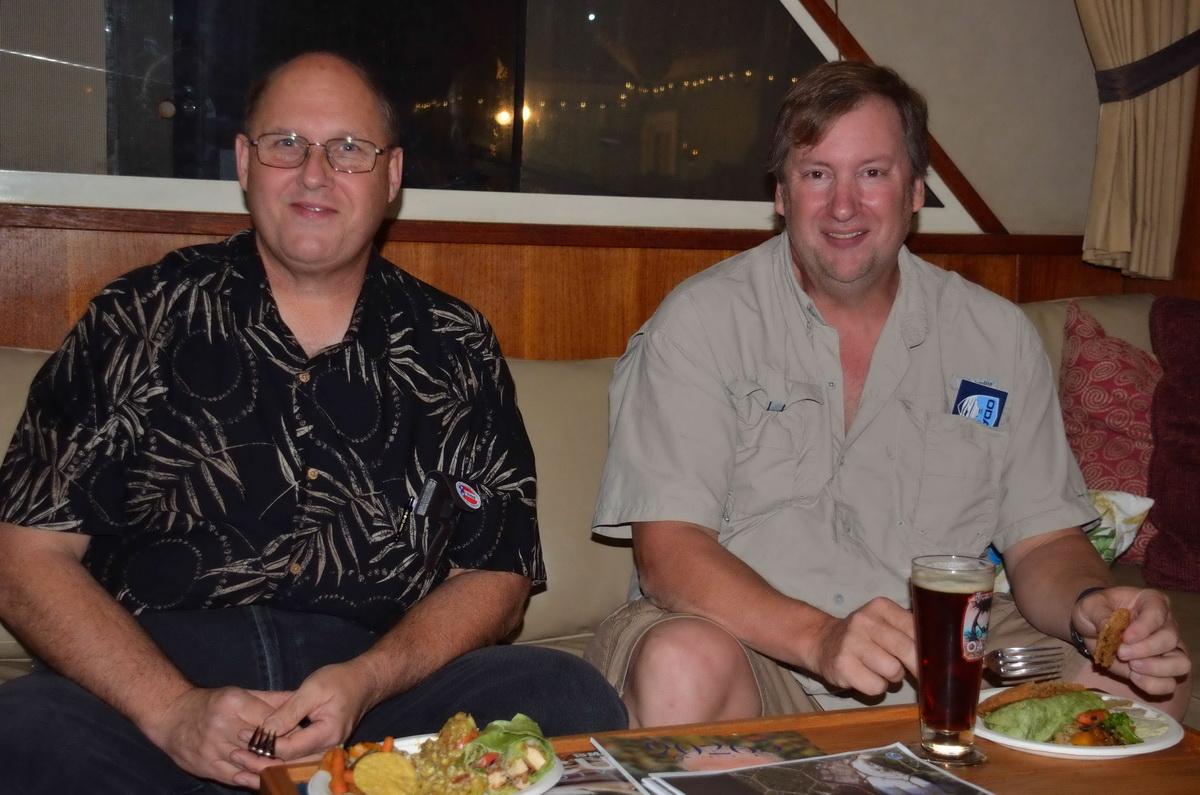 Last week, one night we were on the phone for three hours and 45 minutes working together to fix my computer!  It may sound trivial, but I could NOT do all this video editing without his constant help.

Our video and presentation were very well received at the F&GC meeting.  I had several emails and calls complimenting me on it.  The presentation only lasted three minutes, but as you can see from reading this history, it took years to make it happen.  The Commissioners recommended that we contact some people at the Department of Fish and Wildlife to get their recommendations on what information will be most helpful to them.  This is a HUGE step in the right direction and reinforces the value that our documentation brings to the table.

You may be asking yourself, why doesn’t the government already have this documentation?  We all know that the current federal administration only cares about projects that can be seen as financially profitable.  With an infusion of industry lobbyists in the agencies that are supposed to protect our natural resources from exploitation, conservation has been shut out of the process.  So, ODA is doing something that needs to be done, but only because we have the financial support of the community.  We could NOT do this without your help!

Please be sure to look at our photo gallery below which has photos of the coastlines with heavy concentrations of trap markers.

In order to give the Commission the best and up-to-date trap location maps, we’re going to go up in the air once again from San Diego to Santa Monica this October.  We’ll get a good grip on where the high concentrations of traps are set, then take our boats out and start the GPS marking process.  We’ve received a small grant from the Fund for Wild Nature to get this project started and we’re seeking more donations to make it all happen.

Thanks to all our donors AND crew for continuing to support us during these trying times.  We will do all we can, despite the current circumstances, to make our waters safer for the whales that we share this time and place with.