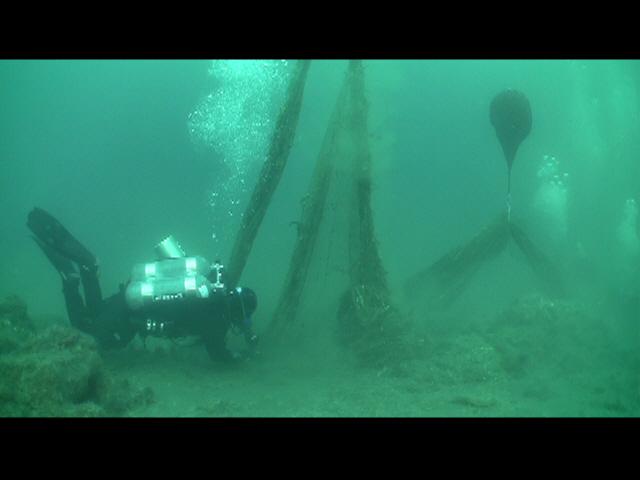 This may not sound exciting at first, but I encourage you to read on to learn about the fruits that came from the "meeting of the minds" that I am about to share with you.

On February 24th I had a meeting with the National Oceanic and Atmospheric Administration (NOAA) staff responsible for Channel Islands National Marine Sanctuary (CINMS).

I gave them a presentation about the results of ODA's 2013 campaign this protected area to remove debris from one of the crown jewels of the nation- Anacapa Islands.

This presentation was highlighted by some outstanding video that volunteer ODA Dive Crewmembers Peter and Trevor Fulks have taken from our campaign which was called Operation Deep Sweep.

In addition to the video, I gave the staff printouts with the data on every trap, net, and line ODA removed from the sanctuary.  Because of their positive response to all this information, a meeting that was supposed to last a half hour, turned into an hour and a half.  Their feedback was outstanding, and they encouraged me to renew my permit to operate in CINMS, which we have done.  It was approved for all of 2014.

The very next day, I received a call from one of the wardens who patrols the CINMS.  He said that they just found a huge net near West Anacapa Island…and would we take a look and see if we could remove it?

Team ODA is on it!

I immediately put an email out to our core volunteers and the response was instant and overwhelming.  I started lining up two teams, the first one would go out and scout the site, do a quick assessment of the area, and film as much of the impacted area as possible.  The second team, our "re-breather team" would go out on a subsequent day and do the majority of the net removal. 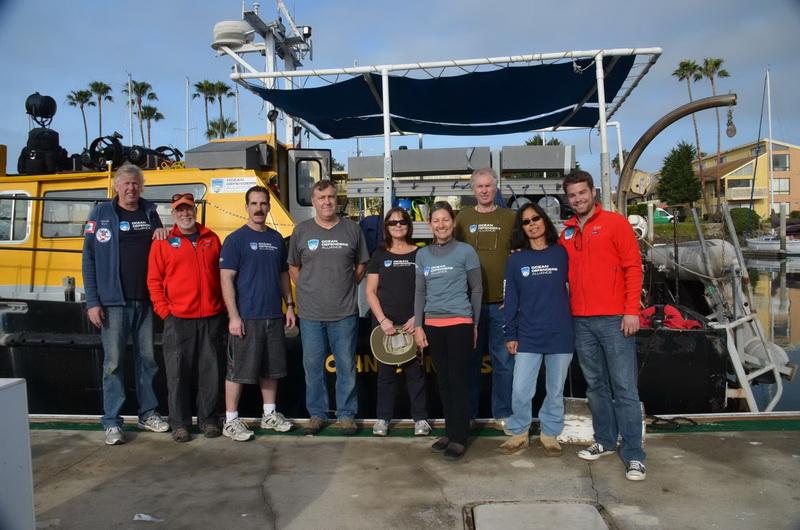 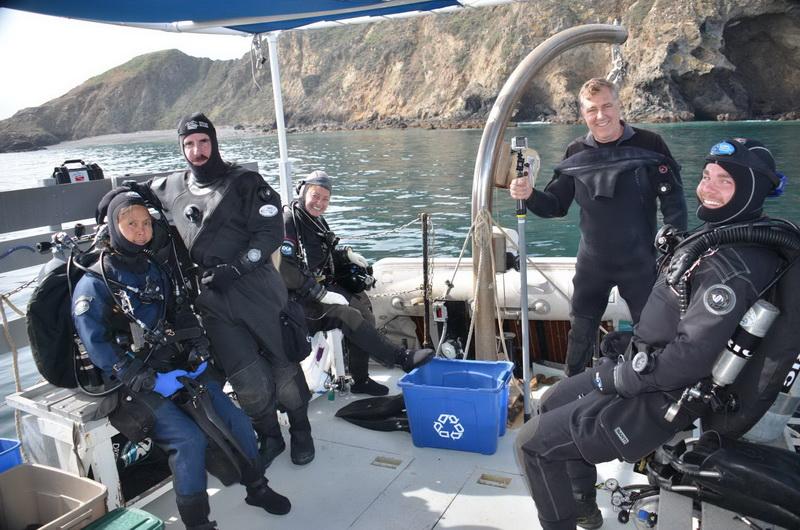 On Sunday, March 23rd, we headed out under cloudy skies and unusually flat seas.  The dive team consisted of Kevin Augarten, Kim Cardenas, Gina Castillo, Eric Humphreys, and Walter Marti.  This was the first time out for Kim and Gina, and they turned out to be not only excellent divers, but enthusiastic about ODA's mission.  Eric was the lead, and did a great job of briefing the team on how to carefully and safely remove a net.  Walter rounded out the effort by taking underwater video.

Teamwork with NOAA Pays Off 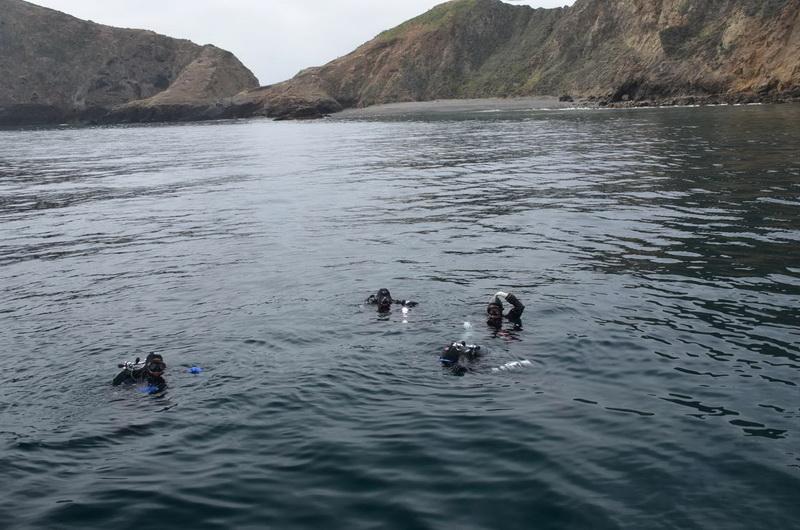 Thankfully, the GPS coordinates provided to me by the warden put us directly on the spot.  After the divers descended the anchor line, we could see their bubbles about 100 feet away from the bow of the Clearwater.

After about 20 minutes two lift bags broke the surface.  This site meant great news: They were able to assess the net quickly and realized they could start the removal process immediately! Jim and Tim quickly jumped in the Zodiac and paddled out to attach a towline to one of the bags.

As soon as they got the towline to us on the Clearwater, another bag popped up from the same area.  Oh boy, were we going to be busy on deck!  Jim and Tim climbed back onto the Clearwater and we all started hauling in the first set of lift bags.  We coiled one line around the davit motor to pull the heavy stuff out of the water, only to find out the motor didn't work…oh joy.  Now we had to haul the net in by hand.  With lots of grunts and groans and a few words not suitable for family entertainment, we got a huge pile of net onto the deck. 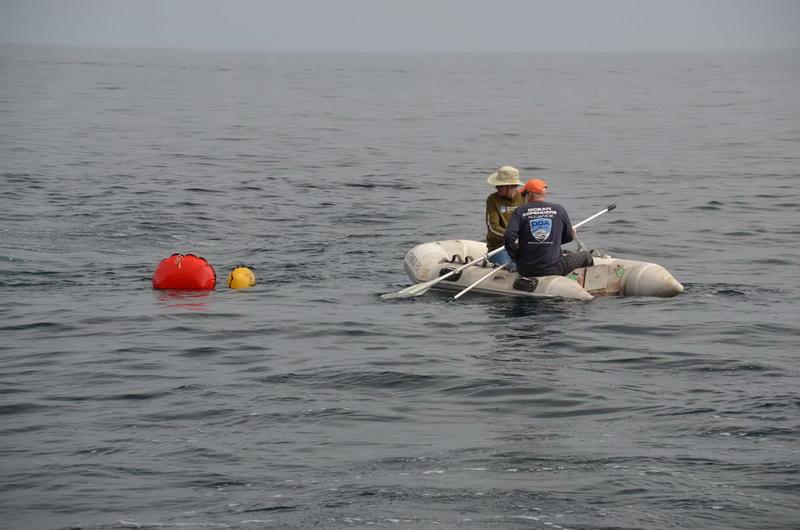 As we turned our attention to the divers, they were just surfacing and we saw the last lift bag drifting away in the current.  We got the divers back onto the boat, weighed anchor, and motored over to snag the bag.  Eric jumped in the water and attached a towline to the net, and we soon had another large section of net to add to our already substantial pile.

After a quick lunch break, the divers dropped back down and started removing more net.  After about 30 minutes they surfaced, got back onboard, and we hauled another two sets of net up onto the rear deck.

Check out our entire photo series in the Gallery below!

In all, we removed about 600 pounds of net from this site.  We headed back to shore at about 2 o'clock under still cloudy skies, and thankfully, calm seas.  Everyone was thrilled to be a part of this project, and we talked all the way back about this particular net, how much more of it was left, and how grateful everyone was to be a part of such a positive and productive undertaking: removing hazardous man-made debris from the ocean!

Because of the great meeting I had with the staff at the CINMS, I've been getting a lot of calls from National Park Service wardens about debris they have found in their respective areas.  They'd like ODA to remove it.

We are happy to remove this hazardous ocean debris, for many reasons including the fact that all marine wildlife is threatened by its presence. 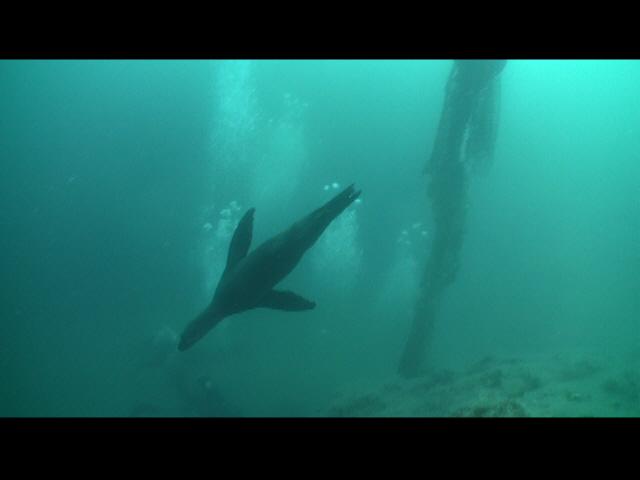 With all these great volunteers, and your support, we will certainly be back! 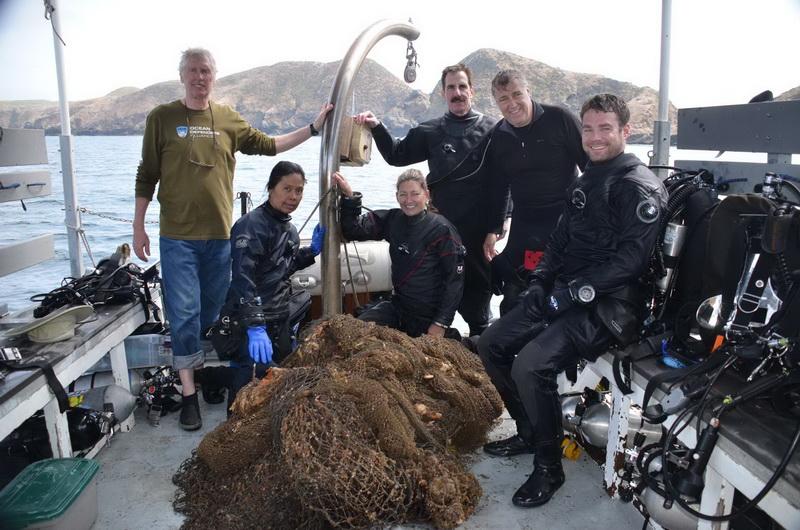 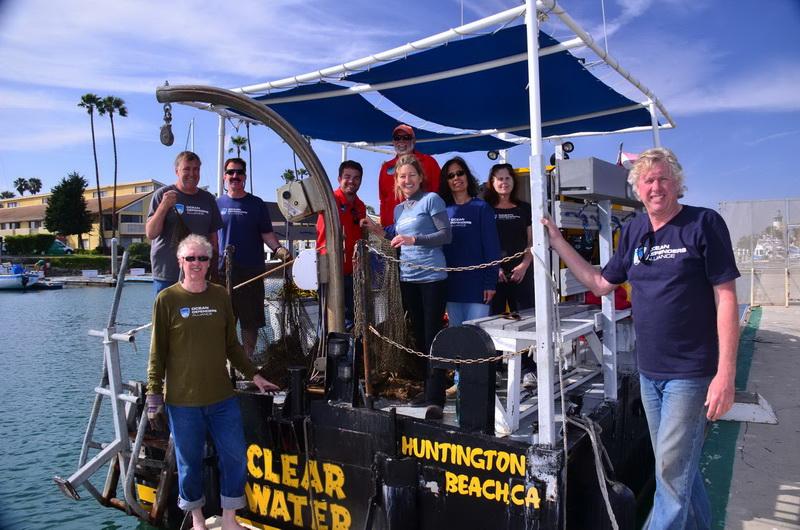 In fact we are planning on returning this Sunday, the 30th, with our re-breather team.  I can promise you one thing, that net will not be killing marine wildlife for much longer.

To view the photos in larger size, click on the photo and a slide show will begin.